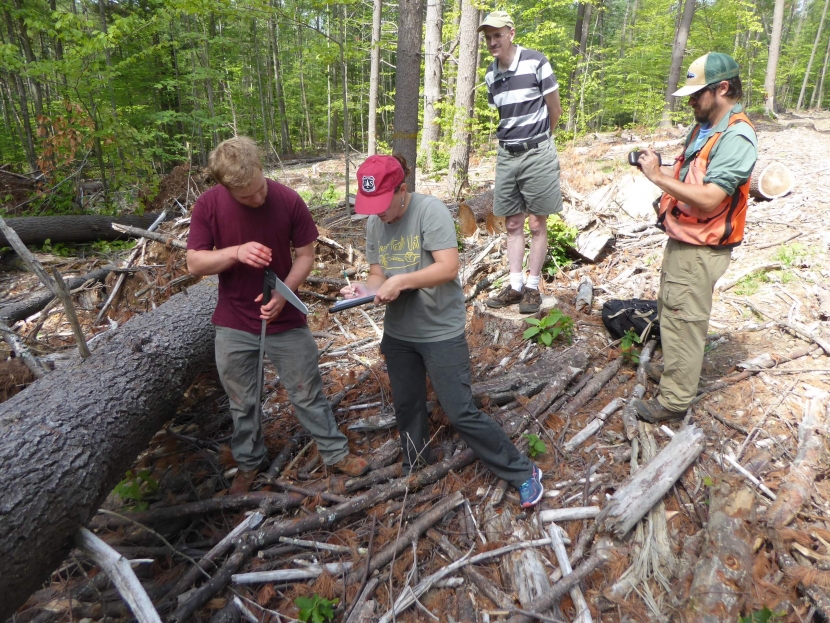 During a March storm, strong winds toppled mature pine trees on our Whittemore Reservation in Lyndeborough.  The forest had recently been the site of a shelterwood harvest, a type of cut designed to reinvigorate the forest by stimulating new growth, while still leaving some large trees in the overstory.  Blowdown of this type is a well-known risk when establishing a shelterwood harvest, especially in a pine stand that had been dense and of mediocre quality.  For this reason, the trees that were selected to remain uncut were of good quality and vigor.

But the wind event in March was strong enough to blow down about 30 good quality mature white pines.  The consulting forester who administered the harvest alerted us to this blowdown, and asked us whether we’d like to arrange a harvest to salvage and sell the wood.  The benefits to such a salvage harvest would be to clean up the mess made by the downed trees and possibly make a small bit of revenue.  On the other hand, leaving the wood to decay on the ground would increase the habitat complexity of this forest, and the material would be readily used by many of our region’s mammals, amphibians and reptiles.

We eventually decided to leave the pines for wildlife, but during the decision making process, a simple question arose.  How long would the pine trees last before they were invaded by insects and fungi that would render the timber’s value worthless?  We asked around, and it turns out the answer to this question was not well known.  Some research had been done on the longevity of cut pine logs, but this seemingly didn’t apply to our situation, in which the pine trees were still partially connected to their root system and many had live needles in their fallen crowns.  Isabel Munck, a plant pathologist with the U.S. Forest Service, expressed interest in examining the site to see if we could learn more.  If we had the question, she reasoned, others might also.  How long would the timber in the toppled pine trees last?

Isabel and the property’s longtime volunteer land steward, Greg Kreider, met Forest Society staff and interns on site to tag trees and collect information.  We peeled the bark off many trees and examined them for signs of insects and fungi.  The pine engraver beetle (Ips pini) can detect the smell of dead pines and arrive on site within a matter of days.  This beetle is thought to be the main vector of several types of sap stain fungus which can turn wood blue and greatly decrease its monetary value to a landowner.  Interestingly, this fungus does not harm the wood’s structural strength, but many sawmills will not take wood that shows sign of this stain. 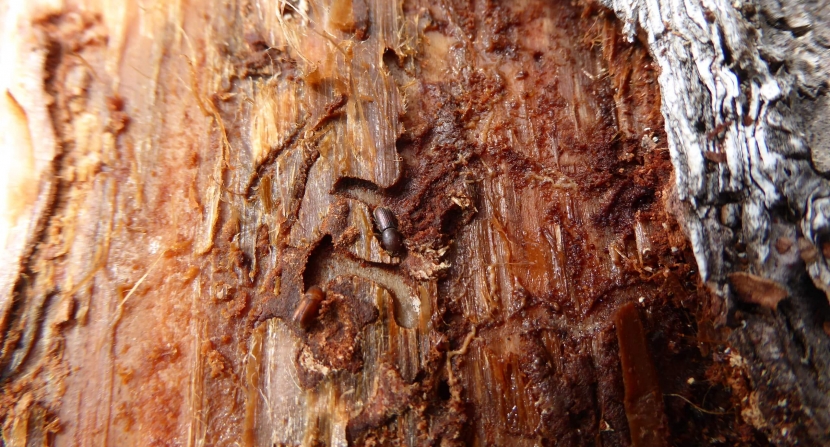 We discovered the pine engraver beetle as well as several other types of insects that are attracted to dead or dying trees.  And indeed, about two-thirds of the blown-over trees showed signs of sap stain fungus.  Interestingly, about one-third of the trees, despite being on the ground, were still living (green needles) and had not yet been affected by insects or any sap stain fungus.  The timber in these trees was sill salvageable about five months after the blowdown event.

The rate at which trees die and decay following a blowdown event is likely affected by many factors.  Most important is probably the season in which it occurs and the subsequent weather and forest floor temperature.  Timber from blowdowns that occur in winter is likely to last longer than those which occur in summer or in hot, dry conditions.  More blowdown events would need to be analyzed to get a more precise picture of all the factors at play.  This snapshot look at the forest following one blowdown was a fascinating way to learn about the transition that trees undergo after they hit the ground, and the insects and fungi that play important roles.

Peeling a pine tree to look for insects and fungi. Forest Society photo. 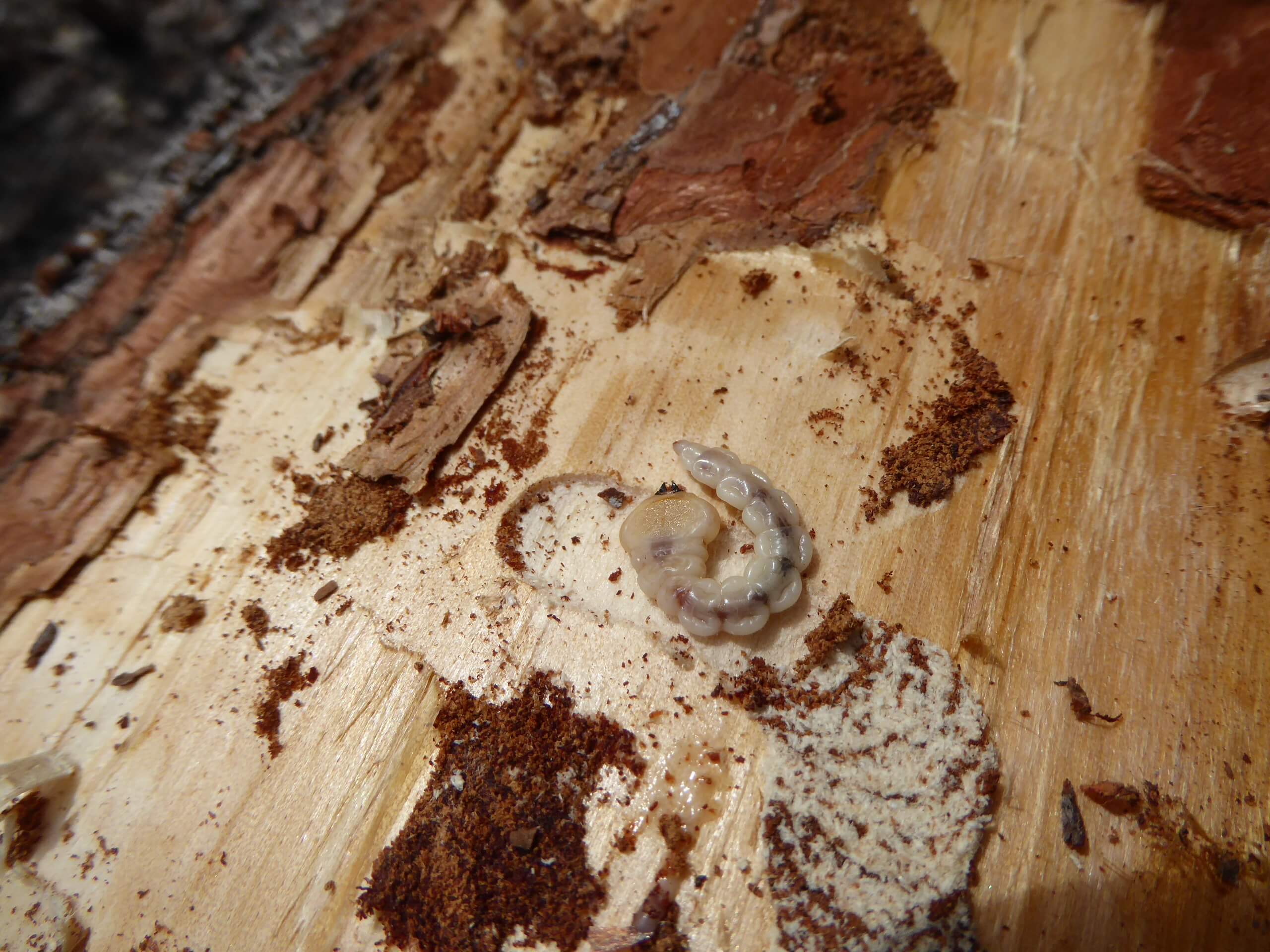 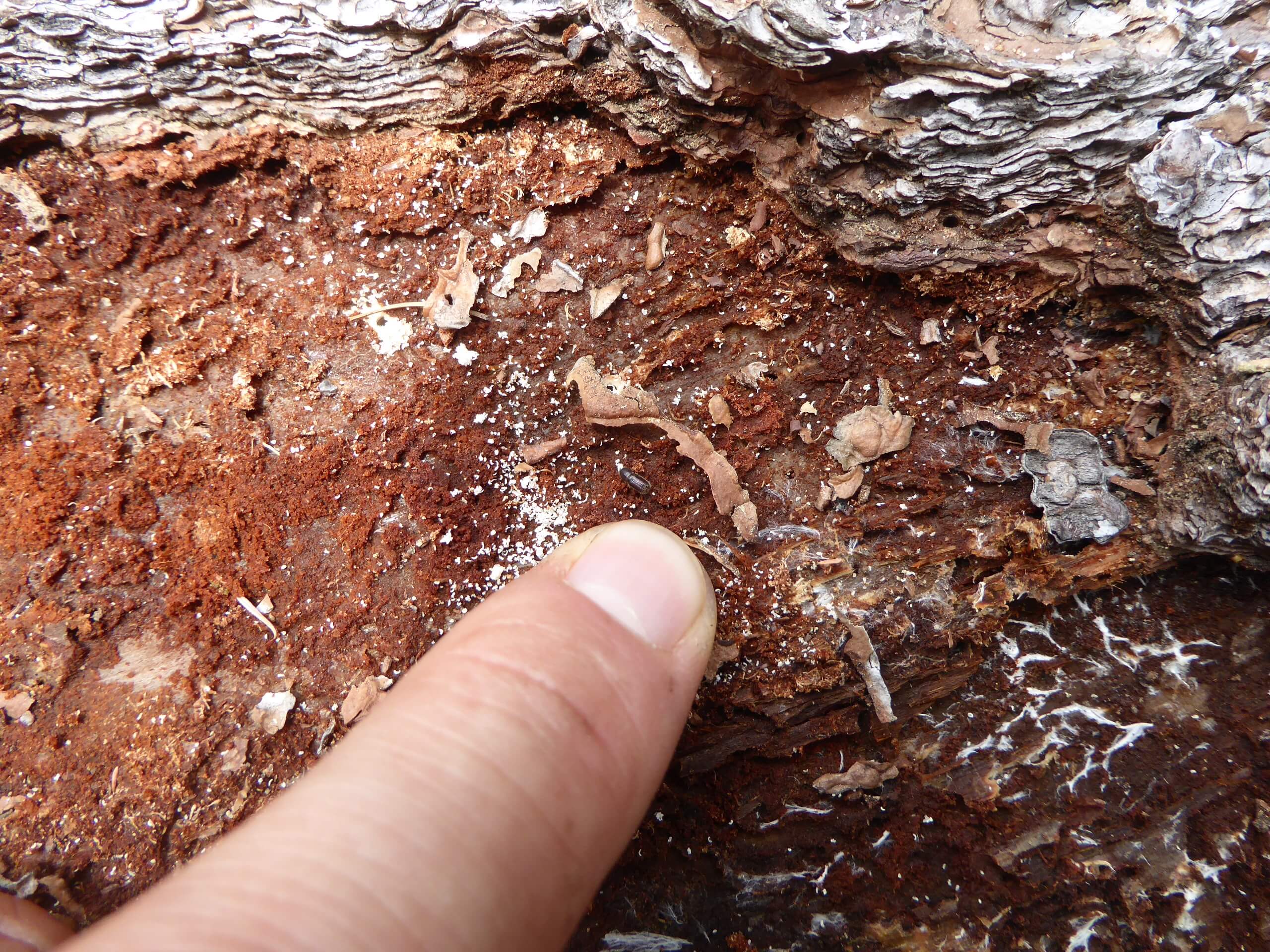 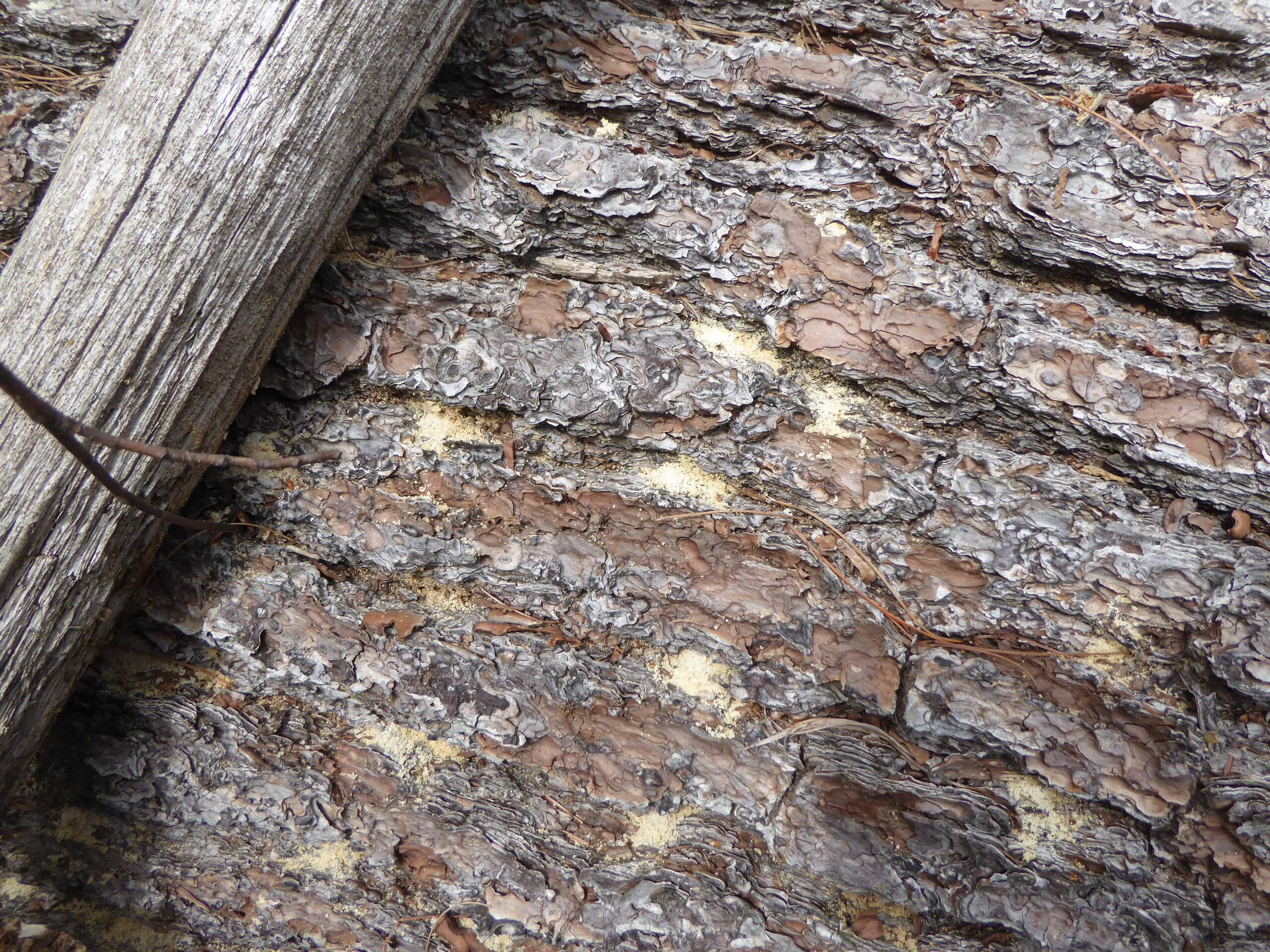