Rising to the Occasion: How A Grassroots Effort Ultimately Defeated Northern Pass 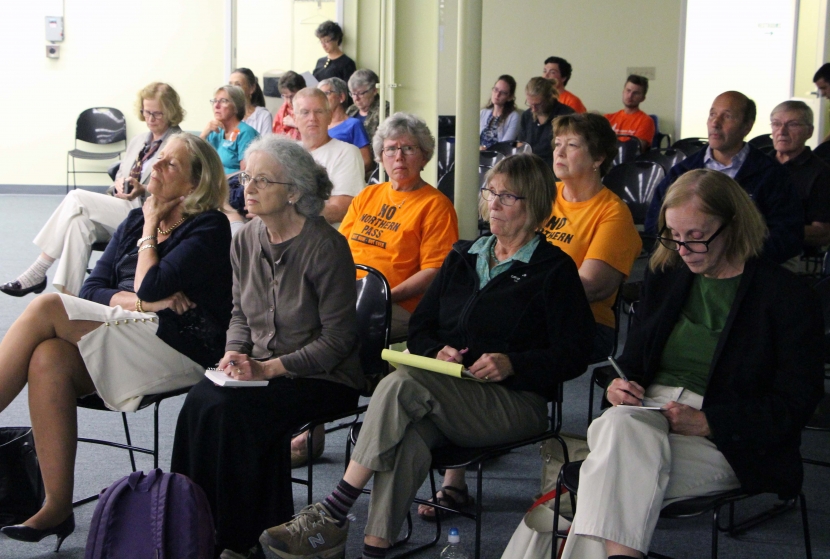 The Site Evaluation Committee charged with rendering judgment on the application by Eversource for the 192-mile Northern Pass Transmission line through New Hampshire heard final input from members of the public regarding the project at a hearing in August 2017.

One fall day in 2010, I had just taken the mail out of the mailbox at the end of my driveway and was thumbing through the bills and catalogues when my neighbor appeared, bursting with news. Gazing at the field across the road, she told me “they” were going to put up a new powerline just down at the bottom, against the spectacular backdrop of Cannon Mountain and the Kinsman Range.

I refused to believe her. Then I called other neighbors and invited them over to discuss the developing problem we all faced. The same thing was happening up and down the proposed Northern Pass line that fall: first disbelief, then action. All kinds of action.

For the nine years that the project loomed over us, people did everything they could think of to make their opposition public and crystal clear. There were so many acts of opposition, large and small, that wove a varied tapestry conveying the unmistakable message of resistance and tenacity.

Over time, individuals joined small groups and small groups joined large groups who befriended each other and worked together against the project. Tight networks formed that crossed every line: politics, age, geography, native or from away, full- or part-time, financial situation, level of education; you name it, it simply didn’t matter.

The threads of the woven tapestry often were spun from small, simple, persistent acts of opposition. A group of townspeople in Easton conceived the idea of placing orange bows on every mailbox in town. The idea soon spread to neighboring Sugar Hill. Opponents met together (many for the first time) and spent hours and hours creating the bows, recruiting their friends and neighbors to display them, and then distributing them around town to be tied up. In Sugar Hill, we tried to affix bows to 80 percent of the mailboxes in town. Once a few orange bows went up, nobody wanted to be left behind. Within a very short time you would have been hard pressed to find a mailbox that was not sporting an orange bow in either town. The bows took on a life of their own, appearing on sign posts, telephone poles, and other convenient spots.

The bows were so eye-catching that local businesses asked us to supply informative materials that they could give to curious tourists who wanted to know more. Out of that suggestion, we produced an orange rack card with graphics and project details, and by word-of-mouth and these hand-outs, our cause eventually stretched beyond state boundaries.

One enterprising group decided to have postcards printed and addressed to former Governor John Lynch, with a blank space for a message and the sender’s name. Others later invested in an address stamp and worked together pre-stamping postcards donated by a local photographer. A number of businesses agreed to place a basket of these cards and a collection box on a counter or desk so their customers could fill out the card and leave it there to be picked up and shipped. The result was a flood of mail to the Governor’s office. I heard that he received more pieces of mail on Northern Pass than on any other issue, and I’m not surprised.

A local construction business got creative by attaching a giant banner on a semi-trailer that was parked on their land. The banner showed the land with and without towers, highlighting the visual impact the line would have in the area. The trailer stayed there, on a state thoroughfare, for several years, leaving the indelible impression of active opposition.

Artists came out in droves to support our mission in any way possible. An accomplished graphic designer created the beautiful “Stop the Towers” design, which was printed on lawn signs, T-shirts, buttons, bumper stickers, and several large banners. The lawn signs were displayed everywhere and the buttons were ubiquitous.

One lady of my acquaintance was never seen without her Stop the Towers button. I think she even wore it on her pajamas, though who could say for sure.

On several holiday weekends and during fall foliage season, when Franconia Notch traffic was especially heavy, a group of local ladies stood for hours on the Echo Lake overpass holding a Stop the Towers banner and waving at the cars driving on Route 93 to raise awareness and to drum up support.

In Columbia, N.H., a visual artist created a sculpture for her Master of Fine Arts thesis work  that conveyed her relationship with the northern New Hampshire landscape and the Northern Pass project, which was threatening to destroy the region’s idyllic viewsheds. Her husband joined the cause by banding together with others to build the “Live Free and Fry” website.

While professional filmmakers produced such films as Northern Trespass and The Power of Place, more than one group of middle schoolers created and submitted anti-Northern Pass films to the North Country Middle School Film Festival. The Pittsburg School won “Best Performance” for its short film, Stop Northern Pass, in the 2012 festival.

Now, with the battle won, I look back at those seemingly small acts of opposition and I see them as part of an organic fabric that was stronger than steel.

In nearly every town slated to “host” Northern Pass, individuals stood up in ways that suited them, came in contact with others of the same mind, and built a massive opposition that simply would not fade, would not bend, and would not stop. It was way more than what Eversource and Hydro-Québec ever bargained for, and in the end, it was their undoing.

As the opposition grew and developed, one overriding common element emerged. The threat of hulking high-voltage pylons ranged across our landscape was bigger than anybody’s concern for their backyard. It turns out that what drove people was their love and regard for land in New Hampshire. Maybe we all took it for granted before it was threatened. Perhaps if you had asked us about our attachment to the land on the day before the project was announced, we would not have been able to articulate it. But as the fight wore on, and we undertook one action after another, and united with others around our state, we realized how much we treasured the land we live on and how the land is the essence of New Hampshire.

Not only did we learn how to fight and how to win, we came to a better and deeper understanding of what is worth fighting for.

Nancy Martland, PhD, is a Forest Society board member who lives in Sugar Hill, N.H. She is a retired educator who began her career working with young children and finished it working with college students and conducting academic research at Tufts University. Nancy's initial point of contact with the Forest Society involved the fight against Northern Pass, which gave her the chance not only to work closely with the Society but to become acquainted with its larger mission to protect the forests of New Hampshire.  She is one of the founding members of the Ammonoosuc Conservation Trust and serves on the Board of the Sugar Hill Historical Museum.

This blog post originally appeared in the Winter 2020 edition of Forest Notes: New Hampshire's Conservation Magazine. Join today to start receiving our quarterly, award-winning magazine that will keep you up-to-date on the latest land conservation news and special stories of people and place in New Hampshire.