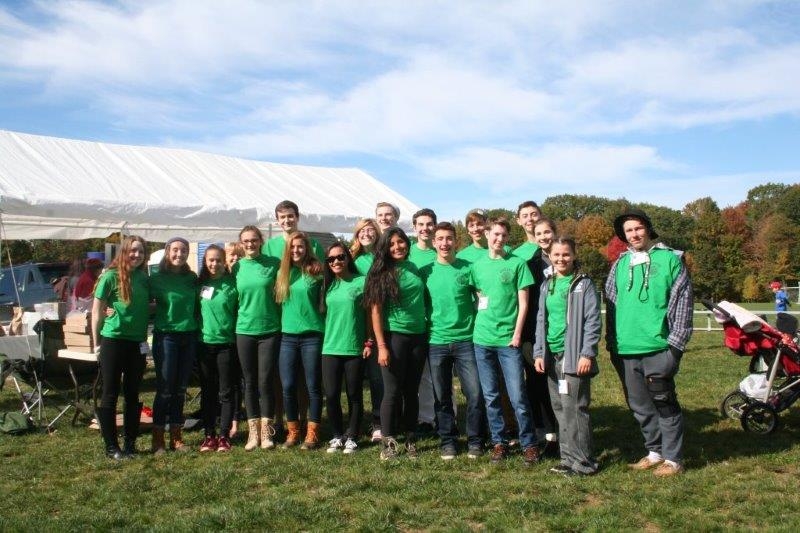 A teen- and pie-powered event Saturday raised money and awareness to help the Society for the Protection of N.H. Forests (Forest Society) get closer to its goal of creating a new conservation area in Madbury, Durham and Lee to be called the Powder Major’s Farm and Forest Reservation.

Volunteers from the community helped the Forest Society hold an “Explore the Powder Major’s Farm and Forest Day” that featured guided hikes of the 229 acres the Forest Society is working to conserve and festivities at Madbury’s Tibbetts Field, which abuts the property. The conservation project includes a 195-acre parcel being purchased from the current owners -- several members of the Goss family -- and another 34-acre parcel being protected from commercial development through a conservation easement.

Thematic hikes focused on how the project will protect the water quality of the Oyster River, which flows through the property, wildlife habitat, recreational opportunities and a historical connection to the land’s Revolutionary War-era owner for whom it’s named, “Powder Major” John Demerritt.

Teens from the Oyster River High School’s Sustainability Club helped sell pieces of pies that were baked and donated by community members, raising $850 for the cause.  They also handed out fliers and made signs for the event. Many also went on one of the guided hikes in order to write about the ecological benefits of conserving it, with the promise of extra credit from their science teacher and advisor Jon Bromley.

Sustainability Club co-organizer Lauren Quest said student club members were excited to be involved in an effort to protect the natural resources that make the community a special place to live. “We’re so lucky to live in New Hampshire and it’s really important to recognize the value of pieces of land like this one,” she said. “It’s a place that can be enjoyed by many, but if this land was to be used for something else, like houses, it would be enjoyed by only a few.”

While the older kids were helping out, younger ones got their faces painted and built fairy houses out of natural materials gathered from the forest. Owners of Andes Alpacas brought two alpacas to the event and offered items made from alpaca fiber in a raffle. Member of local conservation commissions manned information tables as did volunteer hunter education instructors with N.H. Fish and Game. A quartet of music students from Oyster River Middle School entertained with flute melodies. The pie sales, raffle and cash donations yielded more than  $1,600 for the project.

Barbara Lilly, a volunteer who lives near the Powder Major’s Farm and helped to coordinate the many volunteers, said the event’s success shows that the community is committed to the project.

“The Oyster River community has spoken!” she said. “We want to see the Forest Society succeed in their effort to purchase the Powder Major’s Farm and Forest and we won't stop assisting until we help reach that goal. I would ask every person who stopped by the information tables at the event to pass on what they learned to a friend, neighbor or church member so that the news keeps spreading.”

The Forest Society is seeking to raise a total of $2.25 million for the project by the end of the year. Grants, contributions from the towns of Madbury, Durham and Lee and individual donors have so far raised $1,382,000.

“This event really made more people aware of the opportunity we have right now to save this big chunk of Oyster River frontage, and we’re so grateful to all who stepped up to help and to support the project with a donation,” said event organizer Martha Twombly of the Forest Society.  “The momentum is building as we approach our target of buying the land by the end of the year, and we’ll be holding more events in the coming weeks.”

To learn more about the project or to donate, visit www.forestsociety.org/powder_major.