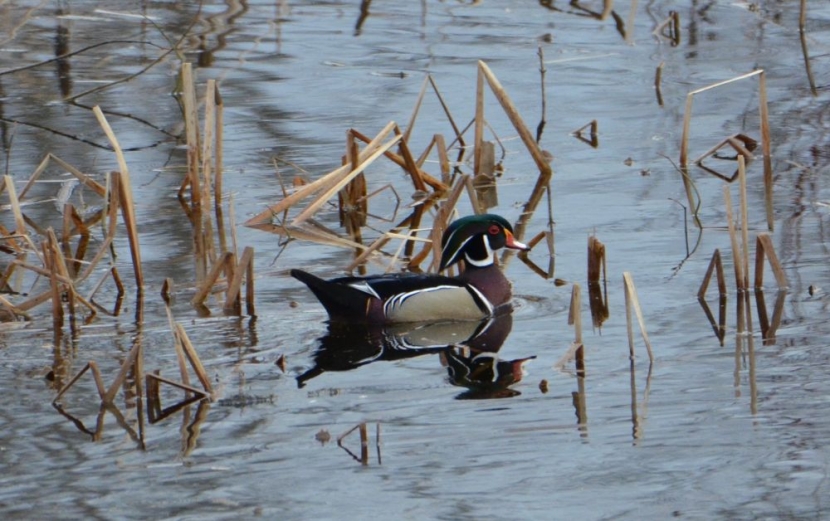 Tom Thomson at the Thomson Family Tree Farm on Mount Cube in Orford let us know that recently he has been "spending as much time as I can in the woods marking boundary lines and at the end of the day my wife Sheila and I drive around to bogs or ponds to look for various birds." We appreciate the opportunity to share his recent photos.

Wood ducks - as their name suggests - are true "tree ducks" adapted to wooded swamps, forested wetlands, beaver ponds and shallow lakes. Wood ducks have specially adapted claws which enable them to perch in trees like songbirds. Like the similarly bold-patterned Hooded Mergansers, Wood ducks nest in structures: hollow tree cavities, sometimes building chimneys or in artificial nest boxes place over water or in nearby forests. Wood ducks can nest more than 400 feet from water. The relative shelter of a wooden nest box or hollow tree allow them to breed earlier in spring than ducks nesting in vegetation along the shores of waterbodies. The expansion of beaver populations creating new wetland habitats along with the placement of artificial nest boxes beginning in the 1930's has facilited a dramatic population rebound of once-imperiled Wood ducks that were formerly hunted for their plumage.

Nesting over open water - and often at a considerable height in trees - offers some protection from arboreal nest predators. Hens line the nest cavity with downy feathers. Artificial nest boxes can be pre-loaded with wood shavings or sawdust. Hens lay 7 to 15 eggs which they incubate for 30 days. Nesting in trees can present other challenges: precocious ducklings leave the nest within a day of hatching by plunging to the water or to the ground beneath the nest in the forest and follow mother hen to the water. Ducklings are able to swim and forage for food immediately. Life on the water provides a safer alternative to remaining crowded and hungry in a hollow tree.

Wood ducks are "dabbling" ducks: feeding on the surface of the water and not diving for food. They eat pond weeds, berries, seeds, aquatic insects and even acorns. 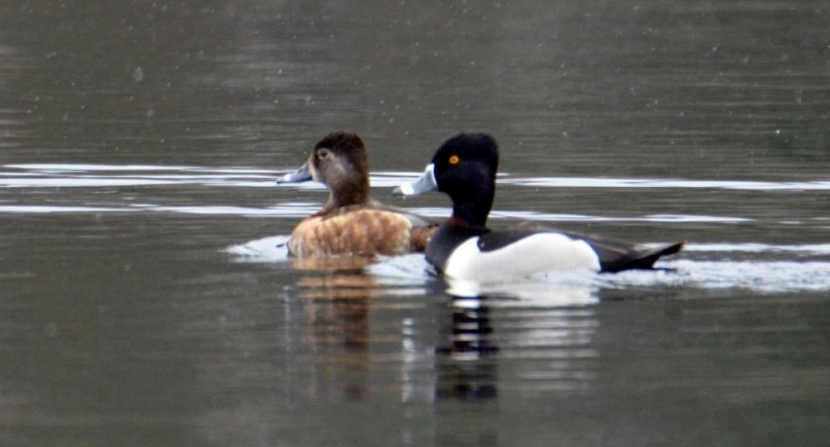 Ring-necked ducks are larger than Wood ducks. Drakes are distinctive with shiny black heads, black back, white breast and yellow eyes with two white rings on and around the bill. Hens are more subtle in cryptic brown plumage for safety. Field marks include a white eye ring, dark brown back, brown eyes and gray-blue feet. A faint cinnamon-colored ring around the neck is harder to see. Some call these "ring-billed" ducks.

Ring-necked ducks appear in southern NH during migration but nest on the shores of northern NH lakes, ponds, rivers of NH's northern boreal forest habitats. These ducks are at the southern limit of their Canadian breeding range in northern NH.

Adults pair-up during migration and separate at the conclusion of breeding season. Nests are constructed in emergent vegetation: cattails, sedges, reeds along the water's edge. Hens lay a clutch of 8 to 10 eggs and incubate for 25 days. Hatchlings are brooded on the nest and then on the water by the watchful hens until the ducklings are able to fly by early summer.

Ring-necked ducks are dabblers and divers feeding on the surface on aquatic vegetation and diving for earthworms, leeches or snails. Older ducklings consume more plant materials including wild rice. Duck hunting clubs and societies had traditionally sown wild rice along the shores of remote lakes, ponds and marshes to provide autumn food for northern waterfowl including ring-necked ducks.

Each spring in March, migrating waterfowl aggregate and concentrate along rivers and in ice-free wetlands of southern NH while ice remains on northern lakes and ponds. Populations of mirgrant ducks not seen in summer become conspicuous for short periods of time during spring migration. Scouts fly north and west on reconaissance missions to scope for newly-ice free territories. Ducks move in a series of staged waves of spring migration, leap-frogging over already occupied territorites to find newly available territories immediately following ice-out in April.

The ancient timing of the April waterfowl migrations and early breeding habits recapitulate a post-glacial history of wildlife migration when vast herds and flocks of mammals and birds expanded northward over centuries into the rebounding NH landscape of melting ice and watery tundra habitat.

Many thanks to Tom Thomson for sharing his photos of new arrivals in Orford.