When is an expert not an expert?
Jack Savage
Northern Pass at SEC 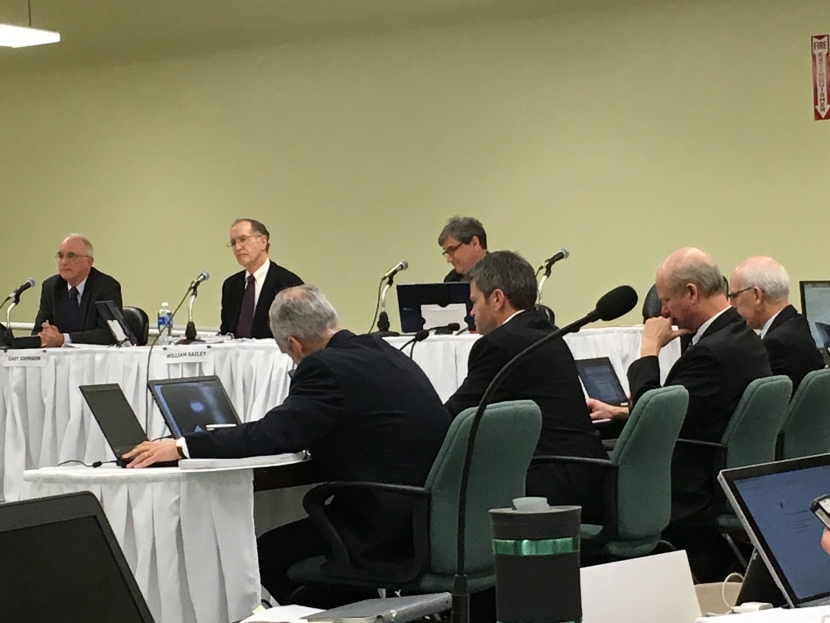 William Bailey (center in the background) was under fire for appearing to have little or no independence from the utilities who routinely hire him, including Northern Pass.

Week two of the Northern Pass Site Evaluation Committee (SEC) adjudicatory hearing, similar to a trial, picked up where it left off the previous week with the testimony of Michael Ausere and Kenneth Bowes, both of whom work for Eversource and provided testimony regarding the proposed finances and construction, respectively, of Northern Pass.

Among the more contentious topics at issue under cross-examination by the Counsel for the Public and intervenors was the status of the Transmission Services Agreement (TSA) between Hydro-Quebec (HQ) and Eversource that outlines who pays for what when it comes to building and operating Northern Pass should it ever be permitted. The TSA has been the subject of significant controversy in the last six weeks as media reports highlighted an apparent rift between the two parties over who would really be accepting financial risk for the project if it were to go forward. This has been muddled by the fact that the existing TSA does not describe the currently proposed $1.6 billion, 1090MW project, but rather an earlier iteration, and no amendment to that existing TSA has been put forward to the Federal Energy Regulatory Commission (FERC).

Under questioning, and arguably quite remarkably, instead of a FERC-approved updated TSA, multiple witnesses referenced a joint press release from HQ and Eversource that attempted to clarify the status of the financing arrangement. Press releases would not appear to require FERC approval.

At least one of the sticking points would seem to be the outcome of the so-called Massachusetts RFP, a request for proposals for renewable energy that Northern Pass has said it intends to bid on behalf of Hydro-Quebec. Presumably, if Northern Pass were to outbid competing projects like the New England Clean Power Link and Granite State Power Link, the TSA would be amended to reflect that. But it was also acknowledged that the TSA allows HQ to consider other proposals, and late last week HQ announced it was doing exactly that.

The question for the SEC would seem to be whether the Northern Pass application is disadvantaged by the lack of any firm market for the electricity that would be delivered if Northern Pass were to be approved and built. This even raised the possibility that Northern Pass could be approved by the SEC, but ultimately never built because it simply isn't competitive.

When asked, Bowes stated "I don't know how or where Hydro-Quebec plans to get most of the revenue from the [Northern Pass] project."

The Cost of Burial

Northern Pass witnesses have testified that full burial of the line would cost an additional $1 billion over and above the stated total project cost of $1.6 billion as proposed with 132 miles of overhead line. But Jason Reimers, BCM Environmental Land Law attorney representing the Forest Society, walked Bowes and Ausere through project costs by town, using Sugar Hill as an example. The project as proposed would bury 1.7 miles in Sugar Hill, at a "total project cost" of $16 million, or $9.4 million per mile.

"Could you multiply $9.4 times 192 (miles) for me?" Reimers asked Bowes. "Do you have a calculator?" His point being that the answer, $1.8 billion, is a far cry from $2.6 billion, and still includes "project costs" such as a $200 million Forward NH Fund and $50 million upgrade to the unrelated Coos Loop.

$100 Million for Decommissioning and Taxes

Much time was devoted to the discussion of a required decommissioning plan for the project. SEC rules require that a plan is in place and outlines the specific options allowed for ensuring that funds will be available when it comes time to decommission the project. It's no small project to responsibly dismantle more than 1,000 towers (686 steel lattice towers, 237 monopoles, 186 H-frames, and more) and 60 miles of underground cable (technically, twice that length, since there would be two HVDC conductors.) The cost of decommissioning is estimated to be, in today's US dollars, $100 million.

The infrastucture associated with the project would have a theoretical 40-year lifespan, though it could be shorter (if it turned out to be uneconomic to maintain) or longer (via upgrades). At issue is the fact that while Hydro-Quebec is on the hook for the $100 million, the out-of-date Transmission Services Agreement (TSA) does not require funds to be set aside until year 36.

Steven Whitley, representing towns intervening opposed to Northern Pass, questioned Ausere on the taxes that would be paid on the infrastructure. Under the TSA, Northern Pass Transmission would pay the taxes, and then would be reimbursed by Hydro-Quebec. At issue is the propensity of Eversource to seek tax abatements from towns, which Bill Quinlan defended as being in the interest of ratepayers. But Ausere acknowledged that Northern Pass is different in that there is no transmission tariff charged to ratepayers, thus any reduction in property taxes amounts to a benefit accruing to government-owned Hydro-Quebec.

On Tuesday, a panel of three paid consultants faced questions about their previously filed testimony regarding public health and safety issues associated with Northern Pass, including electromagnetic fields (EMF) and noise issues. Counsel for the Public Peter Roth cross-examined the trio, starting first with William Bailey of Exponent. Roth methodically questioned Bailey, presenting evidence that painted a picture of Bailey as having made his career working for utilities to permit projects by knowing how to mollify a skeptical public.

In his cross-examination, Roth zeroed in what he saw as Bailey's strategic omissions, quoting a World Health Organization (WHO) report that addresses the relative health risks of EMF. At one point Roth read out a list of chemicals and other compounds that present risks similar to EMF, to which Bailey noted that "red meat" was also on the list.

"Right. And pickled chinese vegetables," Roth countered. Roth's point in the end was that Bailey cherry-picked the WHO report to conclude EMFs posed no risk, when a more thorough reading suggested that it was inconclusive and deserved further study to assess the risk that EMFs pose to the public. Roth raised the concept of “prudent avoidance”, in which EMF experts who acknowledge we don’t know everything about EMFs and human health but what we do know suggests prudent avoidance of human interaction with EMFs. Later in the day, Concord Deputy Attorney Danielle Pacik pointed out where EMFs from Northern Pass (and existing lines) would impact homes and playgrounds where the proposed route would pass through heavily developed parts of the capital city.

Maureen Quinn, representing Deerfield abutters, and a former pediatric oncology nurse at the National Institutes of Health, questioned the Northern Pass witnesses as well.  She showed a map depicting residences in Deerfield (including a senior citizens facility) the appear close enough to the existing right of way where Northern Pass proposes to build its facility and asked whether it may be prudent for Northern Pass to avoid placing the line as close as proposed in these locations.  The experts stated their belief that there would be no health issues with the location of the lines as proposed.

Attorney Whitley spent considerable time questioning witness Doug Bell, who testified regarding noise issues associated with Northern Pass. Whitley ultimately pointed out that Bell's work was incomplete. BCM attorney Elizabeth Boepple (representing the Forest Society) followed up, challenging the scope of Bell's work and ultimately challenging his conclusion of noise associated with the project having no unreasonable adverse effect when in fact the scope of his work did not actually include a modeling and complete review of the entire route. During the Department of Energy hearings, numerous people commented about noise emanating from existing transmission lines, especially in light rain or mist. Lara Saffo, Grafton County Attorney, identified several areas of construction related noise impacts that were totally missed by the sound studies provided by Northern Pass.

On Wednesday Robert Andrew, director of system solutions for Eversource, was on the stand. Of particular interest from Andrew's testimony was that a primary purpose for the location of the conversion station in Franklin was to facilitate subsequent east-west transmission, but at this point that's no longer a concern of ISO-New England. (One alternative highlighted in the draft Environmental Impact Study commissioned by the DOE considered undergrounding a DC line all the way to Deerfield and building a converter station in Deerfield instead of Franklin.)

So will any of this matter? Questions from the SEC subcommittee members themselves, the decision-makers, reveal that they are engaged and listening to the proceedings. Given the extent to which some of the Northern Pass witnesses--and their reports--have come across as incomplete or misleading, it may be fair to say that these experts are not accustomed to a proceeding at which there are so many intervenors opposed to the project, including many represented by competent attorneys.

Next up is a second hearing conference on April 28 to work out the specific schedule of track 2.

Click here to read a summary of Week One of the SEC trial.