Quizzing Quinlan: The Devil Is in the Details ("Subject to Check")
Jack Savage
Northern Pass
Northern Pass at SEC 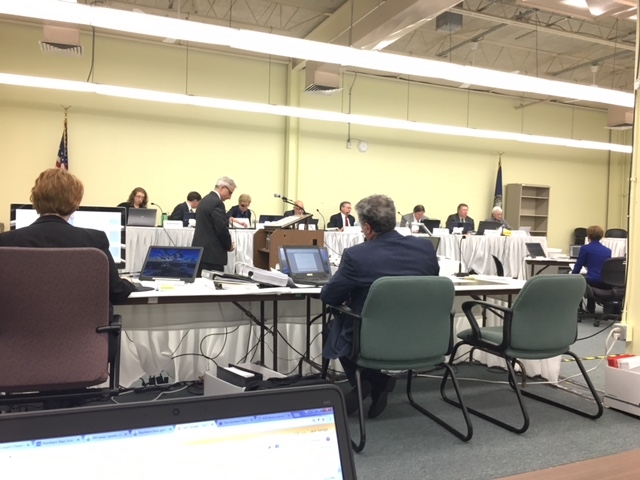 Attorney Tom Pappas questions Eversource NH's Bill Quinlan at the NH SEC trial in Concord. The seven-member SEC, in the background, looks to make a decision on the Northern Pass application by Sept. 30, 2017. That decision can then be appealed.

Day one of the Northern Pass trial at the N.H. Site Evaluation Committee was dedicated to the cross-examination of the president of Eversource NH, Bill Quinlan, who described himself on the stand as the project manager for Northern Pass, including "siting, permitting and construction planning." At the SEC trial, witnesses are sworn in and thus under oath. Intervenors have the opportunity to question witnesses about topics relevant to the proceeding, and have an opportunity to follow up.

Quinlan has also "adopted" the previously submitted testimony of Eversource's  James Muntz, who until last fall was heavily involved in the development of the Northern Pass proposal. Muntz is no longer employed by Eversource, a departure that Quinlan described as "technically a retirement." Some intervenors expressed frustration that Muntz was unavailable, as Quinlan sometimes maintained that he was less than fully familiar with elements of Northern Pass that predated his own involvement in the project. Quinlan frequently qualified his answers to questions as being "subject to check."

Quinlan faced the most pointed questions from Tom Pappas, the attorney representing the Counsel for the Public. Pappas marched Quinlan through detailed questions about route selection, the proposed $50 million upgrade of the Coos Loop (an existing transmission line loop within New Hampshire), and the nature and purpose of several funds set up by Northern Pass/Eversource, among other topics.

Read the transcripts of Day One here and here.

Under questioning from Pappas, Quinlan grudgingly acknowledged that two sections of proposed undergrounding in Pittsburg, Clarksville and Stewartstown, a total of 8 miles, are being proposed because Northern Pass has not secured property rights for an overhead route in those sections of the proposed route. "I believe that was a consideration, yes," Quinlan ultimately admitted.

Quinlan also testified that it is "technically feasible" to fully underground the Northern Pass transmission line. Currently they are proposing to bury 60 out of 192 miles, leaving 132 miles overhead.

When asked by Pappas, "Isn't it really a matter of how much Hydro-Quebec is willing to pay" for burial?, Quinlan testified that Eversource and project partner Hydro-Quebec, a crown corporation of Quebec that is funding the construction of Northern Pass, decided together that full burial at a projected cost of $2.6 billion (their estimate) was not an alternative they wanted to pursue. They have not discussed, Quinlan said, how much more of the line they would or would not consider burying.

Pappas also probed Quinlan on Eversource's own rejection of the potential use of the so-called Phase 2 line, an existing HVDC corridor in Vermont and New Hampshire owned by National Grid, as an alternative. Quinlan answered that Eversource had determined that it was not feasible to co-locate and additional HVDC line, but acknowledged that they had not considered upgrading the existing AC lines along the corridor to accomodate the importation of more power, pointing out that those lines are owned by National Grid. Recently, National Grid has announced plans for what they call the Granite State Power Link, which would do exactly that, and which would be directly competitive with the Northern Pass proposal.

Regarding the Coos Loop, Eversource is maintaining that the upgrade of the northwest quadrant is not only necessary to "make room for Northern Pass", but is among the "benefits" of the project, and that it would allow for future development of renewable energy generation in northern New Hampshire. Under questioning from Pappas, it was evident such a project could well be a 100MW wind development that would be done in conjunction with large landowner Bayroot. Bayroot, a forestland investment tied to Yale University, has agreed to be paid by Northern Pass to lease land to host 24 miles of overhead Northern Pass transmission line. As part of that agreement, it became apparent that Northern Pass Transmission has an option to develop a 100MW wind project.

Attorney Pappas's line of questioning seemed to suggest that far from being a public benefit, the upgrade of the Coos Loop could be seen as a direct benefit to Northern Pass Transmission, a subsidiary of Eversource. His questions also highlighted the need for additional upgrades to occur in order for the stated goal of the upgrades--the potential for transmitting more electricity out of the New Hampshire North Country and into the grid--to be accomplished. Such "incremental" upgrades would apparently not be part of the project, but could be funded by the so-called Foreward NH Fund, Quinlan testified.

Pappas peppered Quinlan with questions about the Forward NH Fund. Quinlan testified that the proposed fund does not yet exist and would be administered by a board independent of Eversource or Northern Pass. That said, Quinlan testified that the $5 million that already has been handed over or promised to Les Otten, who hopes to redevelop the Balsams Resort in Dixville, is "a loan" that would need to be repaid or "converted to equity" (presumably some ownership share in some element of the Balsams). Quinlan professed not to be aware of the closely related timing between Otten filing to become an intervenor at the SEC in favor of Northern Pass and the subsequent wiring of funds to Otten.

At issue in this line of questioning would appear to be whether or not the Forward NH Fund, as well as a $7.5 million job development fund, are truly a benefit to the public or merely a kind of slush fund to entice individuals and businesses to support the Northern Pass proposal. $20 million of the Forward NH Fund would be paid to the Public Utilities Commission for energy programs as part of a previous agreement to designate Northern Pass as a utility in New Hampshire. The $200 million "corporate commitment" to the Forward NH fund, Quinlan said, is included in the projected $1.6 billion project cost for Northern Pass, a cost that Eversource has repeatedly said would be born by Canadian partner Hydro-Quebec.

The public benefit questions are important because the SEC must find that issuing a permit for Northern Pass "will serve the public interest."

Also among the lines of questioning from attorneys representing communities was fairness surrounding the method of depreciation Eversource prefers with regards to property tax assessments of transmission line infrastructure. Quinlan described Northern Pass's proposed straightline depreciation, which would depreciate that value of the $1.6 billion line to $0 over 40 years, as the power industry prefers. Towns that would host the line note that this method negates the reality that  actual market value of the infrastructure will not decline over the 40-year life of the line and will likely extend beyond 40 years, suggesting that Northern Pass is looking to artificially reduce its tax burden.

Quinlan's testimony continued on day two of the trial, as the many intervenors took their opportunity to cross-examine Quinlan on a variety of issues and adverse impacts, including property rights and property values. The SEC subcommittee members also had an opportunity to question Quinlan.

SEC subcommittee members asked, for example, about the proposed Power Purchase Agreement between Hydro-Quebec and PSNH that was dismissed by the NH PUC recently. It was revealed that the PPA would have allowed PSNH (Eversource NH) to resell the power aquired from HQ into the open market.

Media coverage of day one of the trial includes: