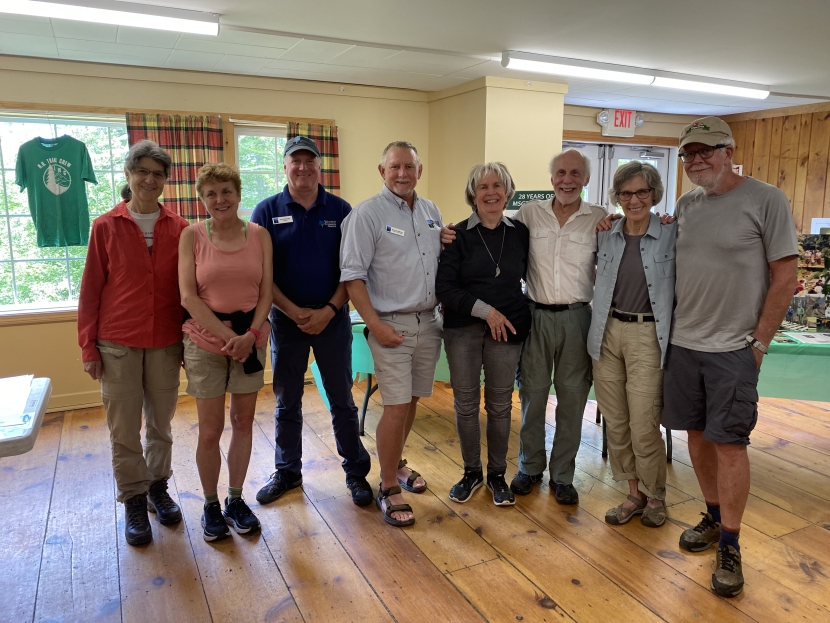 Forest Society staff and alumni connected at the celebration.

The weather was perfect: a clear sunny Saturday morning in early June for a little trail work with the Monadnock Sunapee Greenway Trail Club crew who built more than a dozen bog bridges on the Andorra Forest in Stoddard. Meanwhile, another excursion led by Lucia Kittredge hiked along the Greenway on local favorite - Lovewell Mountain - in Washington, NH. After the morning events, trail crew and hikers assembled at Camp Morgan on Millen Pond in Washington for a party with pizza and MSG swag items - and a Greenway Trivia contest. 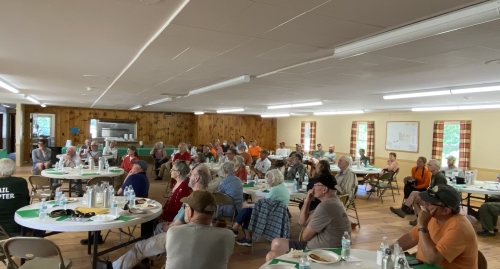 Dave Anderson shared higlights of the early 1920s era history of the historic "Monadnock to Sunapee Trail" - not yet a 'Greenway' - that was begun in 1921 with the route completed by 1924. The Monadnock to Sunapee trail was originally the vision of AMC President, Alan Chamberlain who worked with Philip Ayers, the Forester for the Society for the Protection of NH Forests.  Ayers and Chamberlain had worked to protect Mt Monadnock in 1914 and Ayers helped the Forest Society to acquire land on Mt Sunapee beginning in 1912. Their vision was inspired by construction of the Appalachian Trail begun the same year- 1921 - as the fulfillment of a long distance hiking trail first proposed by Benton MacKay.  In fact, Alan Chamberlain had hoped the M-S trail might one day continue north from Sunapee to link with the Appalachian Trail in the White Mountains.

The local M-S Trail was erased by the tide of historical events: The 1929 Stock Market and ensuing Great Depression, the Hurricane of 1938, the advent of World War II drawing woodsmenoverseas with a substantial war effort on the US homefront and the combined effects of two devastating forest fires: the April 1941Marlow-Stoddard fire and the October 1947 Sunapee Ridge fire obliterated the trail.

The renaissance for the MSG began in 1974 to 1976 when then-Forest Society summer intern Lucia Kittredge was hired to conduct a feasibility study and meet with landowners to secure permission to build a new version of the historic trail.

Lucia Kittridge - for whom landmark "Lucia's Lookout" on the Sunapee Ridge is named - recounted the process in the 1970s that led to the revitalization of the Monadnock to Sunapee Trail as a "Greenway." The trail was designted to providing a hiking trail linking conservation lands and serve as a catalyst for further land conservation in the region. Lucia's supervisor, Ron King and his wife Gerry King came to the celebration in Washington.

MSG Trail Club President and founder Tim Symonds served as MC for the 1:00 pm festivities following a lunch of pizza.  Tim talked about the genesis of the MSG TRail Club and the challenges of restoring and maintaing the treadway including reuilding the Eliza Adams Gorge bridge damaged by flooding and establishing the upgraded campsites from rustic tent platforms to Adorondak style 3-sided shelters spaced along the trail to accommodate minimum impact camping - no fires and with water potable by treatment only.

Lucia Kittredge said, "It was like old home day to reconnect with so many Forest Society friends and former colleagues."

"More memories have been flooding back to me since Saturday. I have a distinct memory of writing something in my 'feasibility study' about the need for long-term trail maintenance. I suggested that local trail users might someday take over trail maintenance.  It seemed a long shot at the time!  Congratulations to the entire MSG Trail Club. I am in awe of the commitment of your members and all that you have accomplished to maintain the trail in superb condition."

Sarah Thorne who had worked as a Forest Society land protection staff completing land conservation projects, re-routing the trail to improve the hiking and with andowner relations for the trail in the 1980s  adds:

"The celebration of the centennial was outstanding.  I'm so grateful for the work and dedication of the trail club. Congratulations! I really appreciated the opportunity to be there."