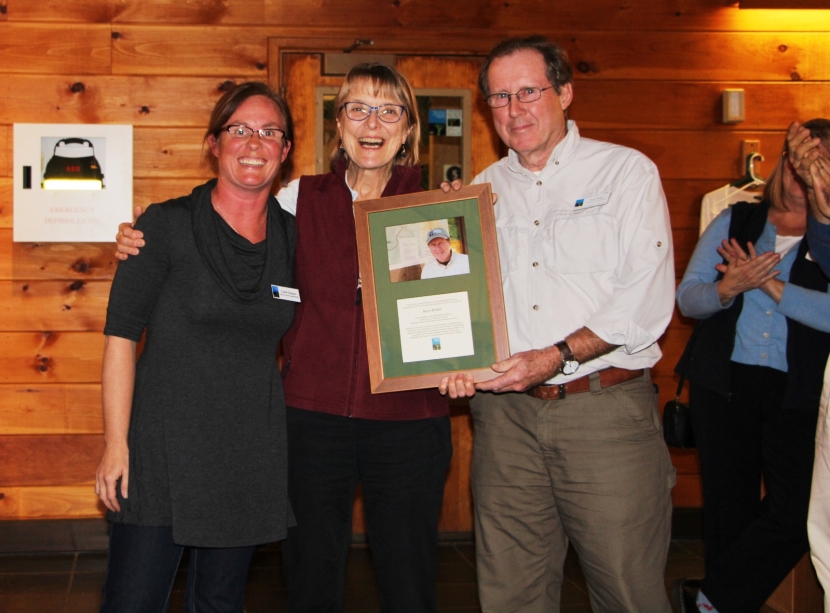 The Forest Society’s 2017 Trish Churchill Volunteer of the Year Award recipient, Russ Wilder, has been enjoying the Belknap Range on the southern shores of Lake Winnipesaukee since he was a small boy.
“There are photos of me right down there on that dock when I was 10 years old,” Russ tells me as we are walking the property that has been in his family since the 1940s.
Now that he has retired to this same land in Alton, N.H., in the shadow of Mount Major, he dedicates much of his free time to protecting this place that has always meant so much to him.
Russ spent his working career in environmental protection.  Graduating from the University of New Hampshire in 1970 with a degree in geology and receiving his master’s degree in soil and water science in 1971, Russ was offered a job at the fledgling Environmental Protection Agency (EPA), which had been established by President Nixon’s executive order only one year earlier.  His work at the EPA involved implementing the Clean Water Act (CWA) in New England, working with tanneries, textile mills and paper mills to reduce and treat their discharges that previously poured directly into the region’s rivers.
“I feel lucky that I was able to get a job at the EPA just at that time, to be a part of that massive cleanup effort,” says Wilder.  “It wasn’t popular with the industries, but we got them to do it.  It was the law. Looking back, it’s amazing how well the waterways have recovered since that time.  People swim in the Merrimack now.”
The fact that steady, hard work and incremental progress can yield incredible positive change must have had an effect on Russ Wilder’s world view, because that is exactly what he has helped accomplish with land conservation in the Belknaps and broader Lakes Region.  Russ has always been an active volunteer, having served on the conservation commission and planning board in Windham, N.H., for a combined 25 years when he lived there.  But in the past 10 years, after relocating full time to Alton, he kicked things into high gear.  He is currently the chair of the Belknap Range Conservation Coalition (BRCC), where he has spent the past seven years helping that group facilitate protection of thousands of acres of land.  He’s also the board chair for Lakes Region Conservation Trust (LRCT) and an active member of the Alton Conservation Commission (ACC) and Planning Board.
“Any one of these roles would be a notable contribution for most people,” says Tom Howe, senior director of land conservation at the Forest Society, “but Russ is so incredibly dedicated to conservation that he handles them all at the same time.  And what’s more, each of these groups benefits greatly from his dedication and work for the other groups.  It’s synergism at its best.”
The Forest Society has benefitted from this synergy, too.  Russ was an instrumental player in our recent campaign to protect 980 acres on and surrounding Mount Major, working behind the scenes with BRCC, LRCT, the Town of Alton, and other groups to build consensus and help raise the funds to complete the project. Following the Mount Major campaign, Russ trained to become a volunteer land steward for the new Mount Major Reservation in 2014.  He has also assisted with our Mount Major Outdoor Classroom (MMOC) Program, which engages elementary schools already taking field trips to hike the mountain.
“I thoroughly enjoy going out with the kids,” Russ says, about assisting with the MMOC hikes.  “The fourth and fifth graders are at just the perfect age for it -- they’re not worried about what others think of them yet, and they’re interested in everything.  These schools -- they’re where our future volunteers are.”
Russ acknowledges his volunteering as a land steward and for MMOC is “the fun stuff” compared to board meetings and fundraising, and then adds, “but how are we going to convince new, younger people to become board members  someday if we don’t hook them in with the fun stuff first?”
Clearly, Russ himself was hooked as a young boy, standing on his family’s dock in the shadow of Mount Major.  At the Forest Society, we’re grateful for that, and so pleased to be able to honor Russ Wilder’s work with the 2017 Volunteer of the Year Award.
Carrie Deegan is the community engagement and volunteers manager at the Forest Society. If you would like to volunteer, you can reach her at cdeegan@forestsociety.org.