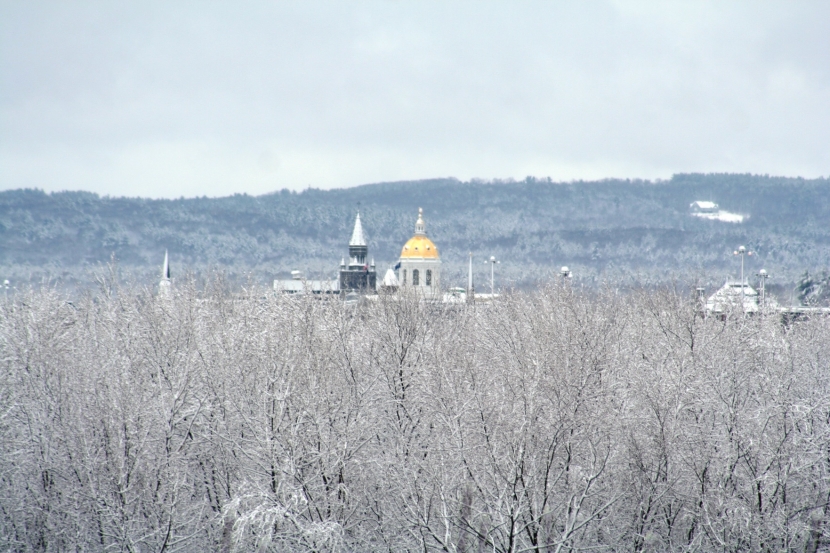 The N.H. State House, as seen from the Conservation Center in Concord, headquarters of the Forest Society. Photo by Peter Ellis.

Even though we're only five weeks into this year’s session, the N.H. Legislature has already debated bills that could impact several of the Forest Society’s priority issues.  Here's a recap:

Land and Conservation Heritage Investment Program (LCHIP):  On February 9, Gov. Sununu released his proposed Fiscal Year 2018-2019 budget.  We want to thank the Governor for recommending the program be fully funded at $3.5 million in both fiscal year 2018 and 2019.

The Governor's recommendation is much better news than a bill introduced in the House earlier. HB 359 proposed to return 30 percent of the LCHIP fee to the municipality from where the real estate transfer fee originated.  The Forest Society testified in opposition to this bill. During the bill’s hearing before the House Ways and Means Committee, Committee members raised several questions about its undefined process for actually returning those fees to the town or city from where they came.  More importantly, several members pointed out how HB 359 would undermine the fundamental benefit and purpose of LCHIP, which is to conserve and preserve this state's most important natural, cultural and historical resources. See our letter in opposition to HB 359 here.

On Jan. 26, the Ways and Means Committee voted HB 359 Inexpedient to Legislate by a vote 21-0.  In other words, they killed it.  Although the legislative process requires the bill to still have a vote before the full House of Representatives, a unanimous committee vote in opposition most likely means this bill is permanently shelved.

Land Conservation: The State has had on its books since 1979 the Agricultural Lands Preservation Program (ALPP). If funded appropriately, the program could help slow down a troubling trend New Hampshire has experienced over the last two decades concerning the loss of agricultural lands to development (see our blog post on this issue here).  On Jan. 31, the Forest Society testified in support of SB 97, which proposes to appropriate $3 million for each of the fiscal years ending June 30, 2018 and June 30, 2019 to the ALPP. A date for a Senate vote on this bill has yet to be scheduled. Read our letter of testimony here.

NH Fish and Game Department:  The Forest Society and our partners at the AMC, Nature Conservancy and NH Audubon have spent the last several years advocating a financial stability plan for the Fish and Game Department as well as changes to its governance structure with the goal of making the Department function more like other state agencies. (See our 2015 letter describing our concerns here). The N.H. Senate is considering SB 48, which proposes to establish a commission to study changes to the Fish and Game Commission and the Department.  The Forest Society, TNC, AMC, NH Audubon and NH Lakes the Association submitted joint testimony in support of this bill.  One of the seats on the study commission would be reserved for a representative from a land conservation organization. This is an important provision as it will give the conservation community a direct role in finding new approaches to strengthen the Fish and Game Department.

On Feb. 2, the Senate Energy and Natural Resources Committee approved the bill on a 5-0 vote.  It now goes to the full Senate for its consideration.  If you believe we need to have a comprehensive discussion about the future of one of the key natural resource protection agencies in the state, please call or e-mail your state senator and urge them to support HB 48.

Energy infrastructure and siting: House Bill 145 would require municipal approval for siting high voltage transmission lines.  The Forest Society supported this bill because we believe it highlights the central role municipalities should play in the siting of large energy facilities. Although the bill was triggered by concerns that several Seacoast towns have with Eversource’s Seacoast Reliability Project, it resonates with those communities that could be forced to “host” the Northern Pass Project. Specifically, many of the municipalities along Northern Pass’s proposed route contend they have the statutory authority under RSA 231:161 to license utility use of municipal transportation rights of way. The concern these towns have is that the N.H. Site Evaluation Committee (SEC) will trump the local authority to issue these licenses. The Forest Society shares their concerns. Read our letter of testimony here.

Unfortunately, the House Municipal and County Government Committee voted HB 145 as Inexpedient to Legislate.  Although the vote was unanimous to kill the bill, several members of the Committee noted what they believe are limited opportunities for municipalities to fully participate in the SEC siting process.  We hope that expressed concern will begin a greater focus on the need to increase local input in the siting of these large energy facilities.

Conversely, HB 462 would weaken the Site Evaluation Committee’s ability to set rules regarding public safety and visual impacts for large energy facilities.  We opposed this bill during its hearing before the House Science, Technology, and Energy Committee on Jan. 31, because we believe both the public and the SEC deserve to have as much information as possible on a project in order to make sound decisions on whether it is in the best interest of our state.  If you agree, please contact members of the Science, Technology, and Energy Committee and urge them to vote HB 462 as Inexpedient to Legislate. when it comes up for a vote soon (the vote is unscheduled). Read our joint letter opposing HB 462.

As we explained in our testimony before the House Science, Technology and Energy Committee, such a change would result in two significant problems for our state. First, New Hampshire would be opening the door to direct ratepayer subsidy of Canadian hydro.  This was never the intention of the Renewable Energy Act when passed in 2007.  Second, by its sheer size, Canadian hydro would severely undercut, and possibly eliminate, the entire market for smaller scale renewable energy projects that the original law was designed to stimulate.

The Science, Technology and Energy Committee has not yet voted on HB 199.  If those changes concern you, please reach out to members of the Committee and urge them to oppose HB 199.