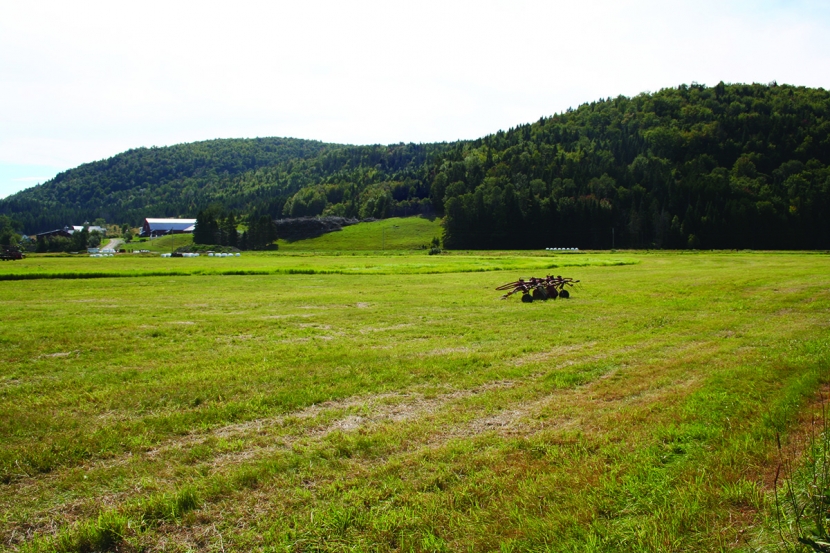 A Forest Society conservation easement protects working farmland at Maple Ridge Farm in Pittsburg. Funding the Agricultural Lands Preservation Program would enable the State of New Hampshire to similarly buy development rights to farmland in order to preserve the land for agricultural use.

At its Aug. 30 meeting, the Commission to Develop a Statewide Land Conservation Plan heard from agriculture experts about the loss of farmland in New Hampshire and discussed potential solutions.  As you may recall, legislation created this commission in 2015 and named the Forest Society to one of the 11 seats on it. The Aug. 30 meeting focused on the challenges and opportunities facing agricultural land conservation in New Hampshire and included presentations from Loraine Merrill, Commissioner for the N.H. Dept. of Agriculture, Jesse Robertson with the American Farmland Trust,  Rick Ellsmore with the USDA’s National Resources Conservation Service and Cris Coffin of the nonprofit organization Land for Good.

The discussion was timely.  The 2014 Legislative Study Committee report on the status of land conservation noted that 20 percent of the most productive soil for growing food has been converted to development and 68 percent of those soils remain vulnerable to development. Continued conversion of these lands will negatively impact the State’s landscape, natural resources and economic vitality. Census data show a 24 percent reduction in cropland acres and a 7 percent reduction in pasture land during the period 2007 to 2012.

The current issues facing dairy farmers in New Hampshire, where 19 of 120 wholesale farms have closed in the past year amid prolonged drought and low milk prices, may exacerbate these losses if farmers decide they have to sell land in order to survive.

However, a solution already exists that could help slow down this troubling trend.  The State has had on its books since 1979 the Agricultural Lands Preservation Program.  The ALPP provides a means by which the State can purchase the development rights of farmland in order to preserve the land for agricultural uses.  Unfortunately, as Commissioner Merrill noted, the program last received funding in the late 1980s!

It is time to correct this problem by setting aside funds to restart the ALPP.  While the question of where to find these funds will be further discussed by the Commission and – we hope -- acted on by the Legislature in the upcoming session, the consequences of not acting are too great.

Note: the Commission next meets on Sept. 13 at 3 p.m. in Room 100 of the State House. Meetings are open to the public, and we encourage you to attend.