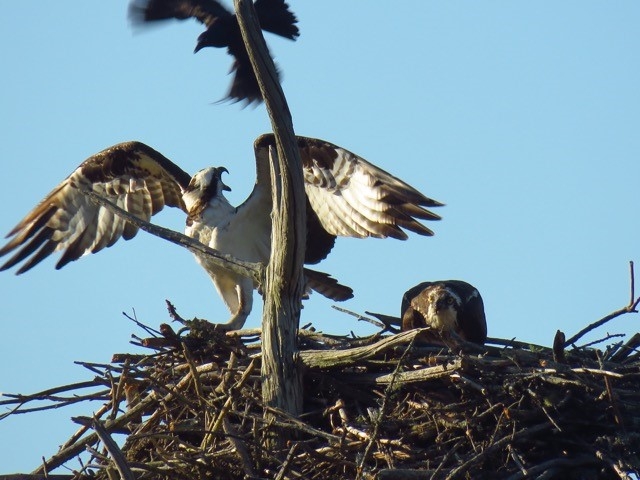 Forest Society 2020 Volunteer of the Year, wildlife photographer and Concord-based teacher, Ellen Kenny recently shared a fascinating series of photos of interactions between grackles and a pair of nesting ospreys. Her narrative follows:

"I’ve been mesmerized by the Osprey and Grackle show that takes place daily at a beaver pond. For the past three years, ospreys and herons have both nested there, with the herons seeming to dominate and harass the ospreys, buzzing over their nest and sometimes sitting in it when the ospreys were off of it. No baby ospreys.

This year, the osprey pair got there first and nested in the heron’s old nest. Their former nest at the opposite corner of the pond was a casualty to all of that wind we had last winter.  However, before the osprey pair started adding on to the herons' old digs, there was a significant grackle presence all around the nest. I know grackles may not have tons of fans but I love watching them. \ Back in the earlier Spring, they were hopping all around that structure, a grackle on each limb of the snag. 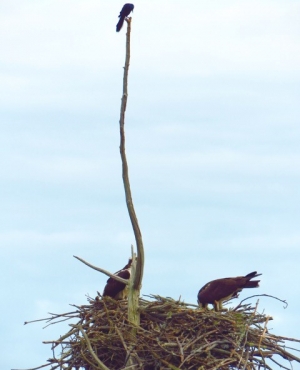 Fast forward to about two weeks ago — I hadn’t been down there in awhile, and spent about ten minutes before school seeing what I could see. There was a grackle sitting up top above the osprey pair like a sentry, and when a heron came swooping in to land in the pond, the grackle left his post and harassed the heron until he left the water and sat in a treetop on the opposite side. Then the grackle took up his post again above the ospreys.  I was enchanted. The ospreys had a pet "watch-grackle."

I figured it was in the best interest of the grackle community to have a successful osprey pair, messy fish eaters leaving scales and scraps all over the place, at their pond, as opposed to those long necked heron that swallow their prey whole. But then I realized things were more complicated...

I (now) think there’s a grackle nest in the "basement" of the Osprey nest. First I thought the lower part of the nest was just the Headquarters of Nefarious Grackle Operations, but they seem to be coming and going through one of the openings and bringing food. Judging by the number of grackles around the snag, they’ve already had one brood. And in absence of herons to harass, they harass the osprey pair with great enthusiasm... 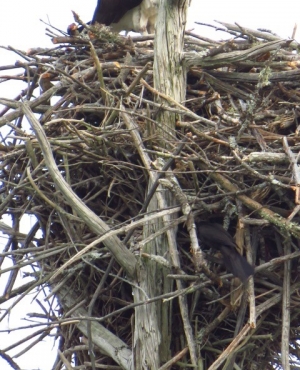 The grackles are most relentless when one of the pair is bringing in a fish. Gangsters demanding their protection fee? I’ve noticed that they don’t bother with the female when she’s by herself sitting (I hope on eggs), but the excitement quotient among the grackle community is huge when one is flying in with a meal. 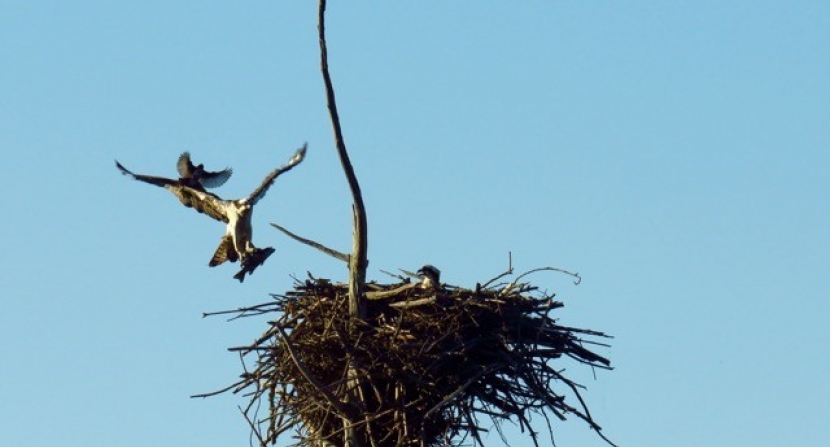 While she is eating, he is shielding her from the downstairs neighbors.

After breakfast, the male flew back and forth into the woods, snapping off branches and bringing them back to poke into the nest.

“Hey honey, can you plug up those holes? We’ve got grackles in the basement again…”

The grackles left the hen alone but made some just-for-fun feints at the male each time he flew back in with a stick - not with the same  tenacity, though, as when he’s bringing in a fish. After the osprey breakfast, the grackles mostly went back to their gleanings in the weeds and rocks at the edge of the pond." 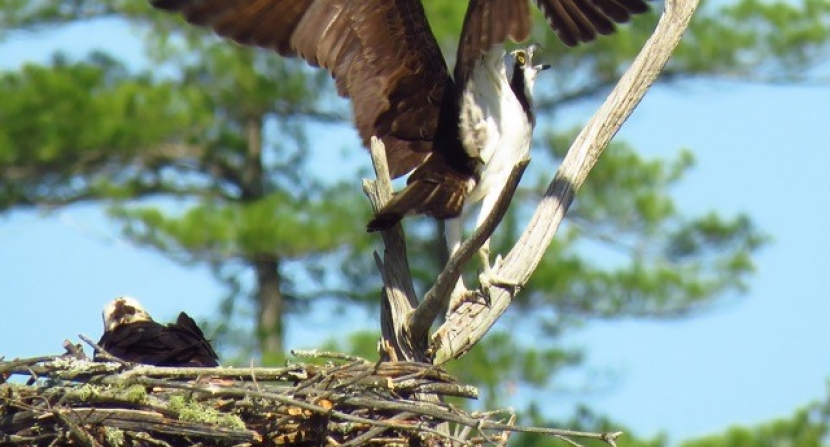