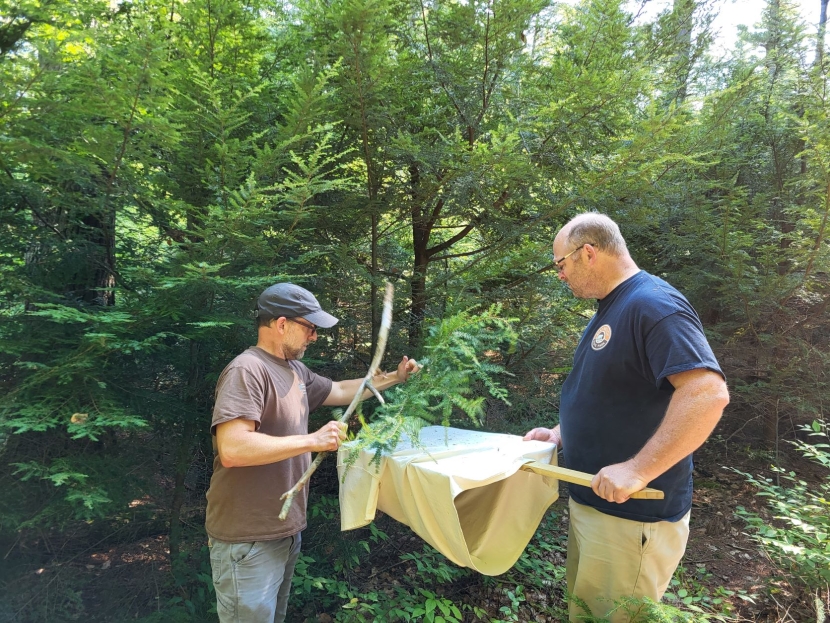 Collecting beetles at the insectary in Durham, on land managed by UNH. (Photo: Steve Junkin)

Nearly a decade ago, the State of NH Division of Forests and Lands Forest Health Division started a unique insectary program to control the spread of hemlock woolly adelgid (HWA), an invasive insect that was first discovered on hemlocks in NH in 2000. HWA has since spread west to the Monadnock Region and as far north as the Lakes Region.

An insectary is a place where insects are reared or kept, such as the Laricobius nigrinus (Ln) beetles growing at the insectary that Steve visited, which will be used as a biological control to manage HWA. 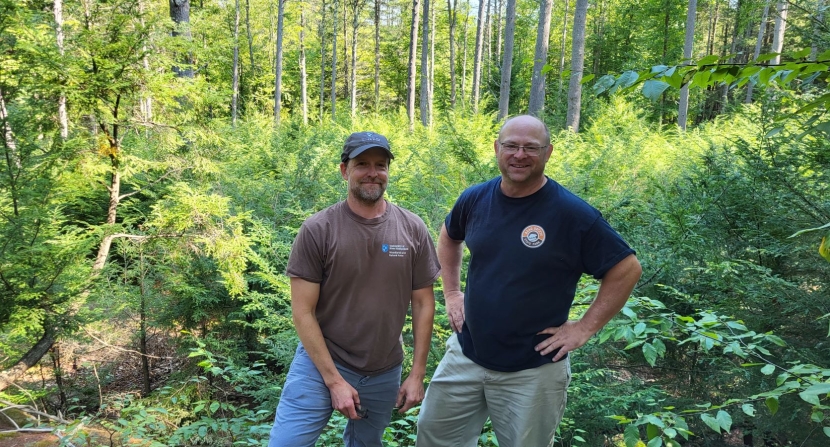 No beetles were recovered at the insectary on the day that Steve visited, unfortunately, as it was too early in the season for the beetles to have emerged from the soil to start feeding on HWA.

The Forest Society's forestry team is in the preliminary stages of establishing an insectary program. We are looking for the perfect site.

Question [Steve]: What is a insectary?

Answer [Jen]: An insectary is a place where insects are reared or kept. The field insectaries we are creating will allow Laricobius nigrinus (Ln) beetles, used as a biological control to manage hemlock woolly adelgid (HWA), to reproduce naturally on their own in the field. Their habitat will be managed in a way that keeps them there naturally so that we can collect them for relocation throughout the state. Ln beetles are currently obtained from labs or field collections in other states and supplies are limited.

Question [Steve]: Supplies are limited... thats a bummer. What's going on there?

Answer [Jen]: Currently, most beetles are supplied by one lab to all states with HWA so we have to share with the other states and sometimes the lab has issues so availability is not consistent. 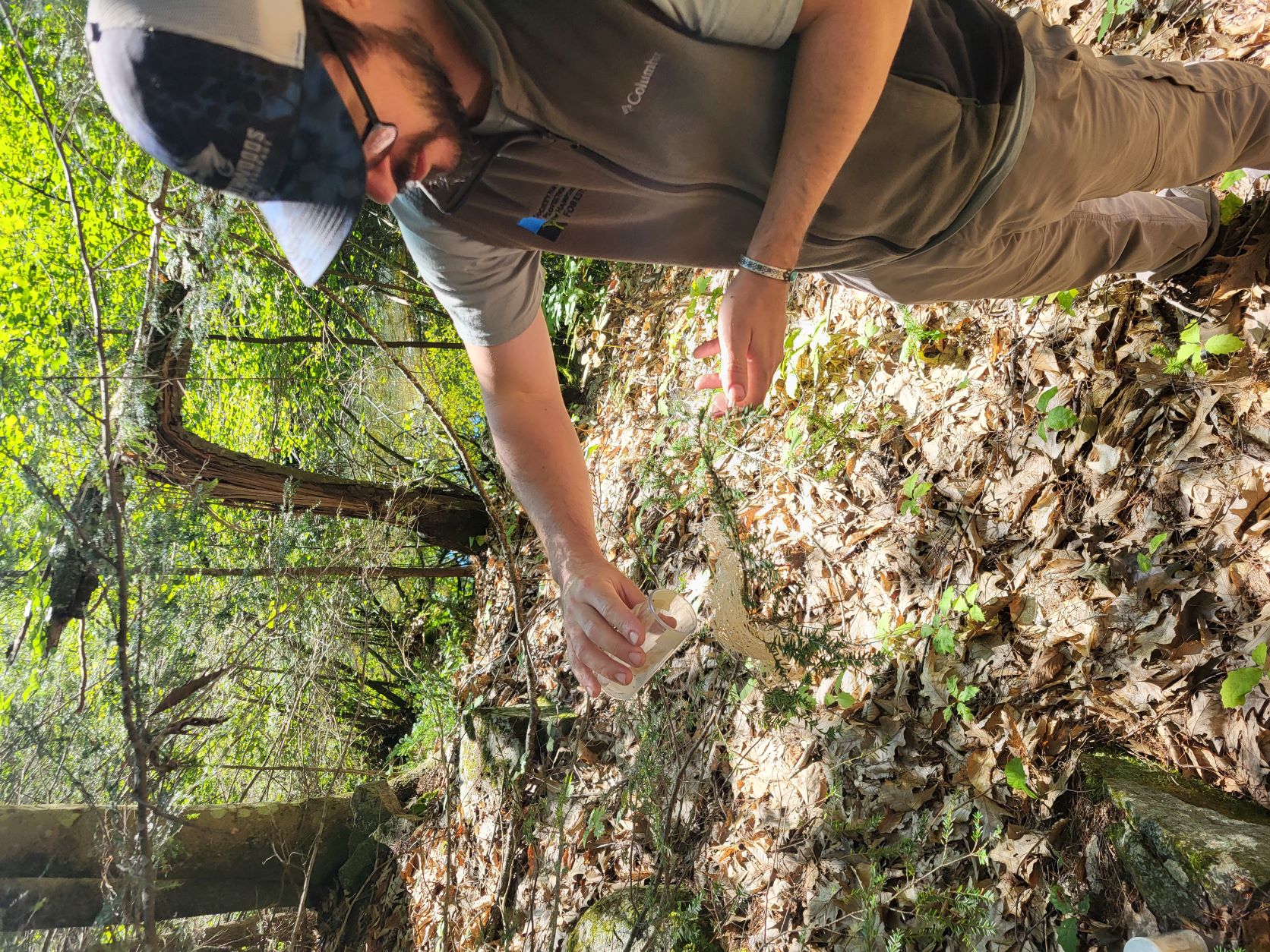 Steve Junkin helps out at the insectary.

Question [Steve]: Where is the insectary and how big is it?

Answer [Jen]: There are currently 2 insectaries in NH. One consists of roughly 20 hemlocks planted in a field in Portsmouth at the Urban Forestry Center and the other is a one acre area of thick understory hemlock in the woods on land managed by the University of New Hampshire.

Question [Steve]: When did it get started and are there others like it out there?

Answer [Jen]: The site in Portsmouth was planted in 2013 with uninfested trees and it took several years of placing infested branches on the trees to get them infested enough to support a beetle release. 500 Ln beetles were released there in 2020. The Durham site which was already lightly infested with HWA was harvested in 2012 to remove the pine overstory and beetles were first released there in 2016 after the site had enough HWA to sustain the beetles.

Additional releases were done annually through 2020 with a total of almost 2500 beetles released at the Durham site. I am now able to make recoveries at both of these sites indicating that they have become established. Hopefully soon populations will increase enough to collect and redistribute. Field insectaries are also being created in other states impacted by HWA including New York, North Carolina, Pennsylvania and Ohio.

Question [Steve]: What type of tasks does it take to maintain the insectary?

Answer [Jen]: The field around the trees in Portsmouth are maintained seasonally by UFC staff. Trees at the forested site are pruned annually by UNH to maintain a height of six feet and trails are kept clear for easy access.

Question [Steve]: Why its important to keep the trees pruned? Is that so you can easily access the tree for beetle collection? 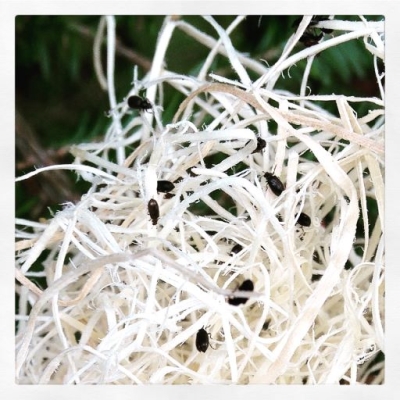 A close up look at the beetles.

Question [Steve]: What are you hoping the insectary will provide?

Answer [Jen]: We are hoping the insectaries will provide an ample supply of Ln beetles for relocating throughout the state to help manage HWA.

Question [Steve]: My last question for you: what is your process of herding the beetles into a jar for collection and later dispersal? I am laughing trying to envision this process.

Answer [Jen]: Lol, to collect beetles we beat on the branches to shake the beetles loose and we use a beat sheet underneath the branch (basically a white sheet) to catch them. They tend to play dead once knocked out of the tree and you can pick them up with a small paint brush and tap them into a jar (they are very small beetles) or use a respirator which uses suction action to pick them off the sheet and into a jar that contains a product called excelsior. Excelsior is a fancy word for wood shavings into long strips so the beetles have something to hold on to and not get jarred around and crawl on each other.

It is important to release them quickly to new sites to establish and begin controling HWA.