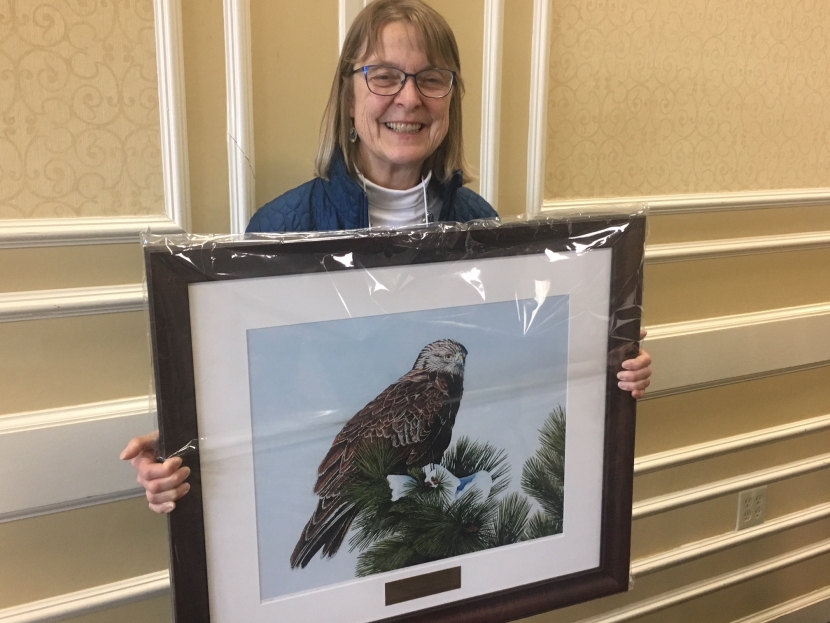 The Society for the Protection of New Hampshire Forests was honored with the Integrity in Conservation Award from the New England Society of American Foresters today in Nashua. President/Forester Jane Difley accepted the award on behalf of the Forest Society.

NESAF's Integrity in Conservation Award recognizes an individual or organization working with natural resources who demonstrates adherence to principles and high standards in the face of adversity.

The Forest Society opposed Northern Pass because of of its legal and ethical obligation to protect existing conserved lands from commercial development such as Northern Pass.

"The real heroes and heroines of this fight are the people of New Hampshire who care so deeply about the forests of New Hampshire," Difley said in accepting the award. "They inspired us and we tried to inspire them."

The nomination letter noted that, “The Forest Society has represented the issues and possible solutions with respect and professionalism. They have been a consistent voice for ensuring that protected lands remain protected.”

One letter of endorsement quoted, “I don’t think any organization I know of has shown as much principled and determined effort on behalf of the people of our state as has SPNHF. They not only talk a good game, but live it too. It takes great institutional courage to speak truth to jaded and ill-informed politicians. They have accompanied their political efforts by buying critical land areas threatened by the Northern Pass project, while committing the organization to the expensive legal fight.”

Another endorsement made these prominent comments, “SPNHF was the first to see the threat to our natural resources, and SPNHF has been tenacious in NP’s years-long campaign to out-wait, out-spend, and outwit New Hampshire. Should we prevail in burying the transmission line for its entire length, or more successfully, killing this project entirely, the victory will lie proudly, and in the largest part, on the shoulders of SPNHF.” “With calm professionalism, patient understanding, broad collaboration, careful strategy, and admirable bravery, SPNHF is defending NH ecosystems against a threat of historic proportions.” “All of NH, now and for generations to come, owes and will owe an unfathomable debt of gratitude to SPNHF for its leadership, vision, and tenacity.”