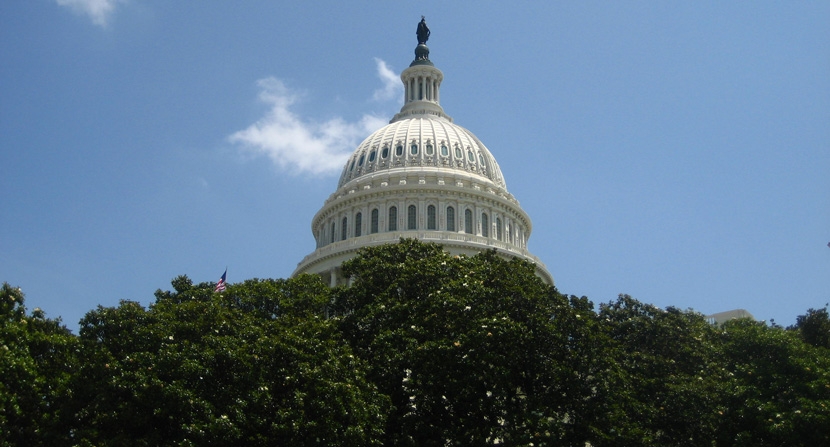 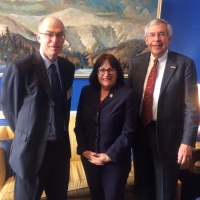 Public Policy Manager Matt Leahy, Congresswoman Ann McLane Kuster, and LTA Board Chairman Jamey French
The two main issues we briefed the delegation on were the importance of ending abusive conservation easement tax shelters and the need to significantly increase the annual funding levels for the Land and Water Conservation Fund (LWCF).  Both issues are high on the LTA’s policy priority list. 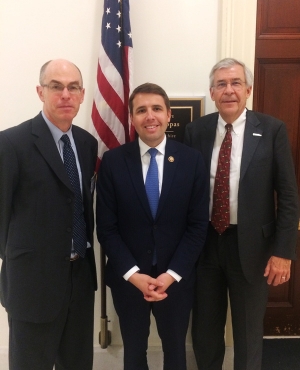 Public Policy Manager Matt Leahy, Congressman Chris Pappas, and LTA Board Chairman Jamey French
Therefore, the LTA and the Forest Society support the on-going efforts to correct the problem.  The Charitable Conservation Easement Program Integrity Act (S. 170/H.R. 1992) will reaffirm the true purpose of conservation easement donations and reward honest philanthropy.  We are happy to inform our readers that following our meetings, both Rep. Kuster and Rep. Pappas agreed to sign on to H.R. 1992 as co-sponsors.  Both Senator Hassan and Senator Shaheen recognized this problem and we are hopeful they will become co-sponsors of the S. 170.  We would encourage readers to thank Cong. Pappas and Cong. Kuster for their support of H.R. 1992 and to ask Sen. Hassan and Sen. Shaheen to co-sponsor S. 170.

For further information on the Charitable Conservation Easement Program Integrity Act of 2019 visit the LTA website. Read an explanation on the syndication of conservation easement tax deductions here. 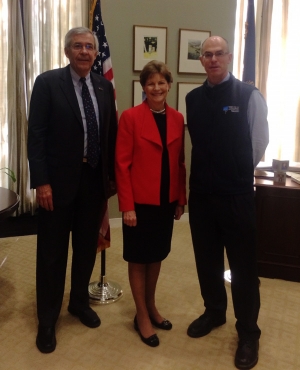 Jamey French, US Senator Jeanne Shaheen, and Matt Leahy
Regarding the Land and Water Conservation Fund, our state continues to be fortunate that our Congressional delegation are all strong backers for the LWCF. Why does this matter to New Hampshire?  As of 2018, the state had received a total of $165.4 million in LWCF funds since the program’s establishment in 1965.   That support has helped to protect some of New Hampshire’s most special natural areas.  This includes not only federally managed areas like the White Mountain National Forest but local parks and, through the Forest Legacy Program, our working forests.

The program is facing two critical questions that will impact its short-term and long-term future.  First, how to ensure it receives adequate funding for Federal Fiscal Year 2020?  Second, how to secure the full and dedicated funding of $900 million promised to the program? In a bit of fortunate timing, Senator Shaheen joined several of her Senate colleagues in introducing S.1081 which proposes to provide permanent, dedicated funding for the Land and Water Conservation Fund. Backers of the program view this legislation as a key step towards answering both those questions. We would encourage readers to thank Senator Shaheen for her leadership on S. 1081.  If you have a minute, we would also suggest thanking Senator Hassan for her support of the LWCF while asking her to continue this support by co-sponsoring S. 1081. 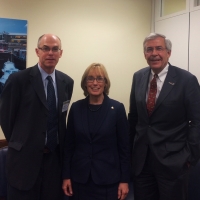 Matt Leahy, US Senator Maggie Hassan, and Jamey French
Finally, because of the on-going concerns in New Hampshire regarding the safety of our drinking water resources, we also briefed the delegation on the Forest Society’s efforts to protect these sources.  Highlighting this work is our focus in the Merrimack River Watershed, notably with the Stillhouse Forest project in Canterbury and Northfield, and our partnership with the Manchester Water Works to protect that city’s drinking water supply.

The positive reception we received in D.C. from the Congressional delegation shows that the New Hampshire land trust community has good friends in high places.