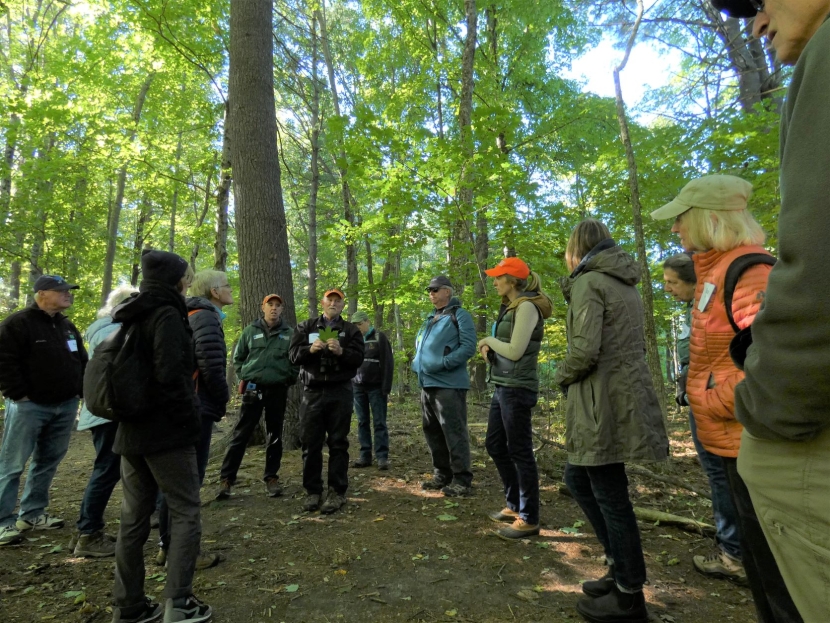 The Forest Society welcomed nearly 150 members and friends to its statewide headquarters in Concord, the Conservation Center, on September 24 for its 121st Annual Meeting. Attendees gathered to celebrate the Forest Society's accomplishments over the last year and to learn more about how to take bold action to avert the worst impacts of climate change from keynote speaker Dr. Michael E. Mann. 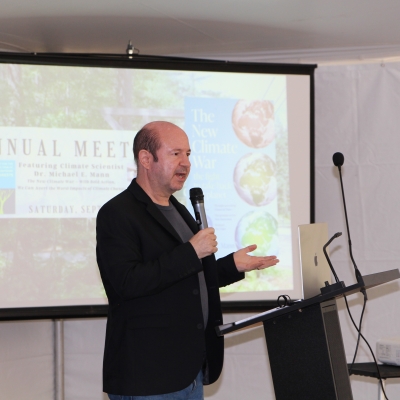 Dr. Michael E. Mann was the keynote speaker. (Photo: Anna Berry)
Dr. Mann, distinguished scholar of climate science and author of The New Climate War, among other books, is a Presidential Distinguished Professor in the department of earth and environmental science at the University of Pennsylvania, with a secondary appointment in the Annenberg School for Communication.

“It’s not too late,” said Dr. Mann. “Ironically the belief that it’s too late could be the one thing that makes it too late…

“The impacts of climate change are no longer subtle. Denial just isn’t credible.”

President Jack Savage shared the Forest Society’s plans to reduce the organization’s emissions and advocate for policies that will address climate change locally and nationally.

“Thanks to people like Dr. Mann, the public’s awareness and understanding of the damaging effects of climate change has increased,” he said. “We now know of the acute need to increase the urgency to do more — to act — to counter those consequences.

“We recognize that as important as natural solutions are, we must also reduce our own emissions. To that end, we have been selected to work next spring with the UNH Carbon Clinic to assess our overall carbon footprint and target potential reductions, including our reliance on fossil fueled transportation.” 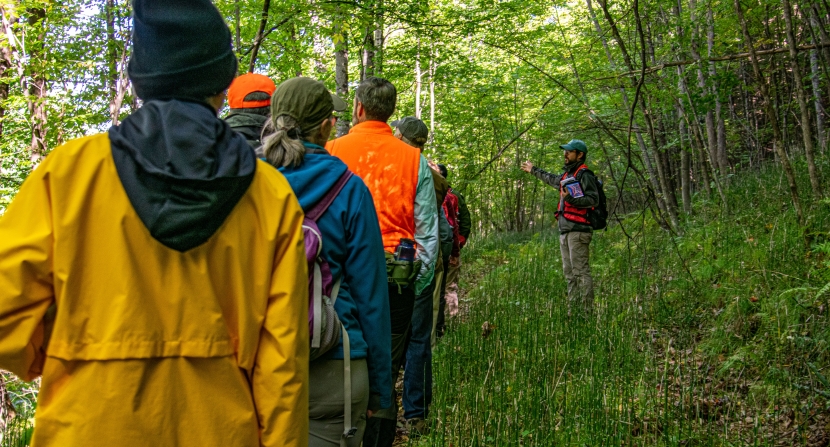 Field Forester Steve Junkin (right) and VP for Land Conservation Brian Hotz led a field trip to Stillhouse Forest in Canterbury. (Photo: Kate Wilcox)
Savage also highlighted plans for the new Forest Society North campus at The Rocks in Bethelhem that will move the historic Carriage House toward net-zero, with a robust solar installation and geothermal heating. Further, the Forest Society plans to partner with Revision Energy to expand ithe existing solar array at The Conservation Center to reduce the organization's reliance on the grid while lowering energy costs.

"It would be easy to highlight our own plans to reduce the Forest Society’s emissions or to point to the nearly 60,000 acres of forestland we own and manage, or the 135,000 acres of land under easement that are already sequestering and storing carbon and declare: the Forest Society is addressing climate change," Savage said. "After all, New Hampshire arguably invented additionality as our forests recovered substantially from 1850 to 2000, sequestering carbon annually — we’ve done a lot. 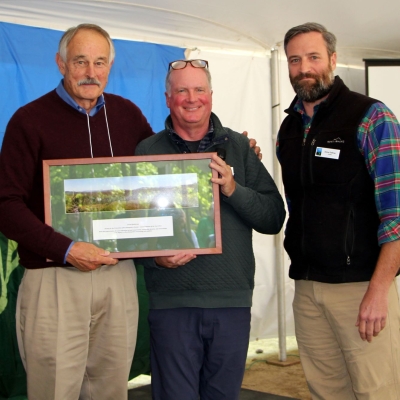 "But resting on our own work and history is not sufficient. If everyone in this state or country feels they 'have already done enough' to mitigate the consequences of climate change, this crisis will not be resolved.  So, even though we are just one organization that operates in one of the smaller states in the country, we must commit to act beyond the walls of the Conservation Center and outside the boundaries of our forest reservations."

During the business portion of the meeting, Phillip Bryce of Deering was elected as a new member to the Board of Trustees. Bryce previously served on the board in 2010 and 2011 before stepping away to become Director of New Hampshire State Parks. Karen Moran, of Webster, was elected by members to continue to serve as secretary of the board.

Board members met following the meeting to elect two new officers: Drew Kellner of Brookline as chair and William Crangle of Plymouth as vice chair. Andrew Smith of Twin Mountain will continue serving as treasurer.

Also at the meeting, the Forest Society presented the Conservationist of the Year Award to Lorin Rydstrom. This prestigious award honors people whose work to promote and achieve conservation is exemplary; people whose actions have made a difference not just in their own backyards, but also have advanced the protection and stewardship of land statewide. 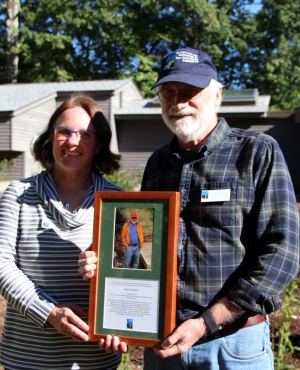 Rydstrom, resident of Hollis, was honored as the Conservationist of the Year in recognition of his longtime career as a founder of Seaboard International Forest Products, his personal dedication to conserving New Hampshire’s working forests and special places, and his leadership in supporting conservation work across the state.

The Trish Churchill Volunteer of the Year Award was given to Dave Heuss. This annual award honors those exemplary people who have volunteered their time, resources, and energy to help the Forest Society achieve its mission.

Heuss, of Concord, has volunteered with the Forest Society for the past eight years. He first volunteered to be a land steward for Woodman Forest in Boscawen, but his volunteerism has expanded tenfold since. 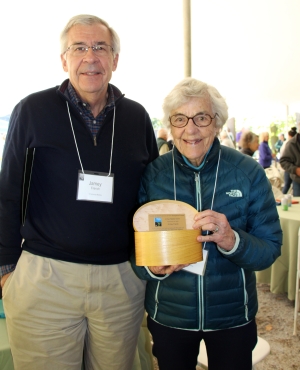 Shirley French with her son, Jameson S. French, after being recognized at the Annual Meeting.

Heuss is also a master woodworker and has built kiosks and bridges, fixed doors, and has done numerous odd carpentry jobs around the Forest Society Conservation Center.

Members were also honored for signifcant milestones, including 25, 30, and 35-year members, some of whom were in attendance. Shirley French received a commemorative wooden box for reaching a huge milestone: 65 years of membership!

Watch a slideshow of photos from Annual Meeting: 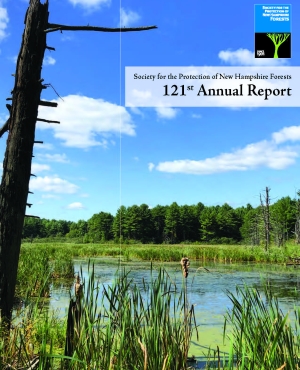 Click to view the Annual Report as a PDF.