Forest Journal: What's Going on Under the Ice? 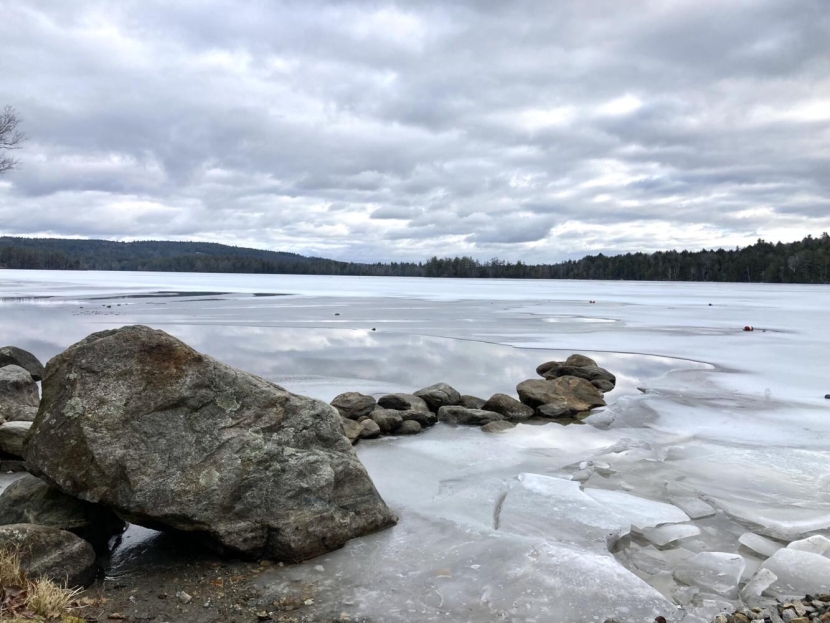 It’s that time of year again- the time when mere mortals can walk on water. Frozen water, sure, but it’s still one of the coolest (pun intended) feats of the season. There is something magical about sliding, skiing, skating, or snowshoeing out onto a frozen pond, exploring areas only accessible by boat in warmer months. In my family, we wait not-so-patiently for those few perfect smooth ice days when we can slide out some goals and challenge friends to a spirited game of pond hockey.  Even when there is snow cover, frozen lakes and ponds provide unlimited winter fun. Where else can you cross-country ski or snowshoe for hours without hills? Or pounce on a triggered tip-up and pull a fat perch up through the ice?  In recent years, local nordic skating enthusiasts have even been plowing ice skating trails on many of our lakes, revealing miles of beautiful glassy ice for recreation even after all the lakes are snowbound. 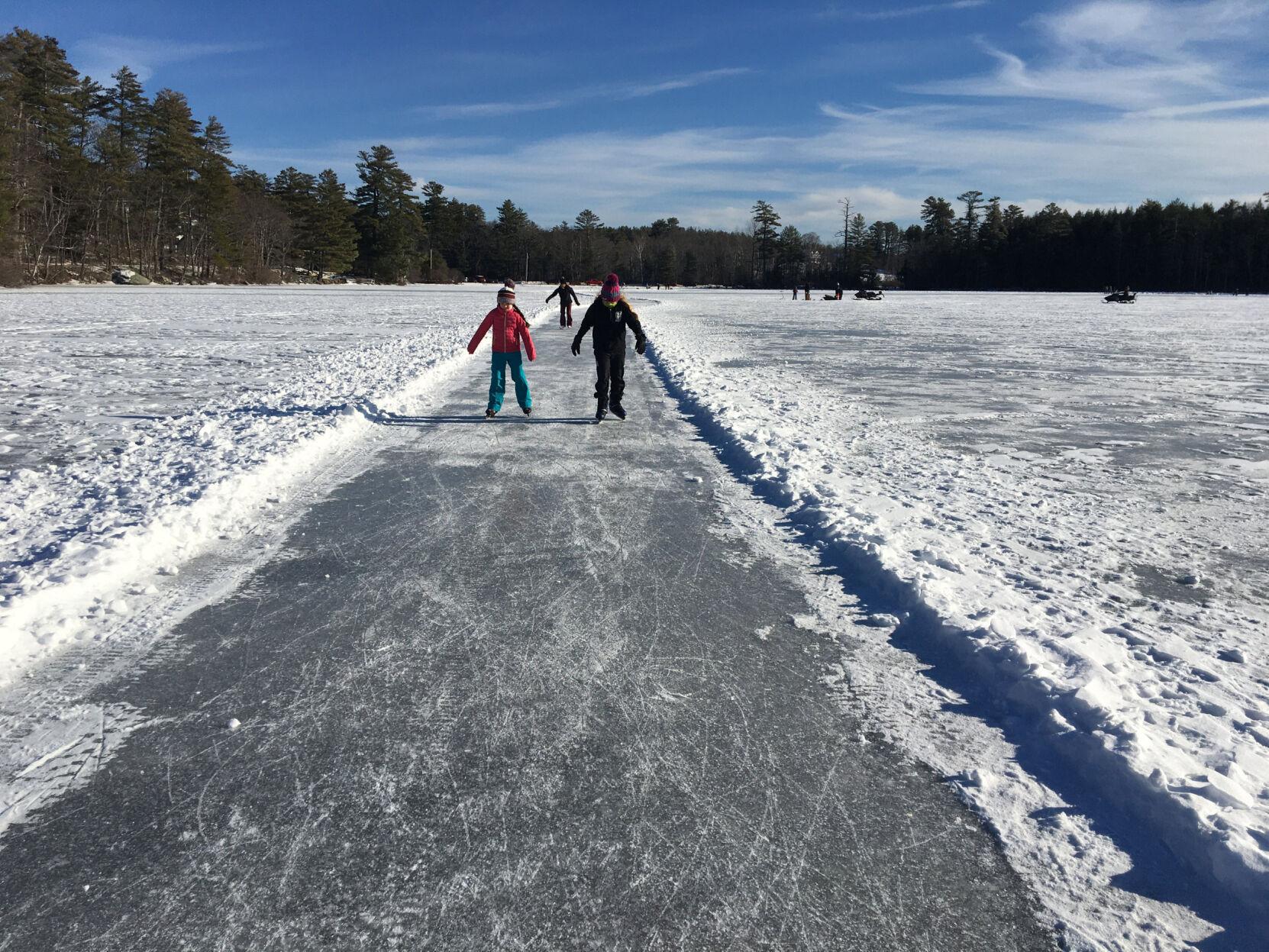 (Carrie Deegan) Nordic skating, where skate blades are attached via bindings to cross country ski boots, is well-loved in the Netherlands and many Scandinavian countries, and is growing in popularity in New Hampshire.

Frozen lakes and ponds are truly part of the quintessential winter experience in New Hampshire, but how does it happen? When the air temperature drops in the fall, water at the surface of lakes also cools. Cool water is denser than warm, so the cooled surface water sinks towards the bottom of the lake, exposing warmer water to the cool air again. The process repeats until the entire water column is a uniform density and temperature of 39°F (4°C), the “magic” temperature when water is at its densest. This is a critical point in the seasonal cycle of any lake, as the uniform density allows the entire lake to mix- called fall turnover- distributing dissolved oxygen and important nutrients throughout the water column. It’s also a point that must be reached in order for the lake to freeze over. Dropping below 39°F, surface water molecules now become less dense, arranging themselves into a lattice-like crystalline structure with a lower density than the liquid water below.  The resulting ice floats instead of sinking to the bottom!

The fact that frozen water floats instead of sinking is noteworthy because most liquids do not behave this way, but also because this allows aquatic life to persist under lake ice.  Life under the ice isn’t easy- the ice effectively seals the lake off like a big tupperware lid, preventing gas exchange with the atmosphere and resulting in a steady decline in dissolved oxygen. Light levels also decrease, especially with snow cover, limiting photosynthesis by aquatic plants and reducing visibility for those animals that navigate and feed using sight.

Despite the challenges, aquatic animals and plants in our region have evolved to persevere in frozen lakes. Plants often die back significantly, but many have thick, starchy roots that store energy for new growth in the spring, or develop specialized winter buds (turions) that resist decay and store carbohydrates that allow the plant to clone itself when conditions improve. Some aquatic animals endure the winter months by entering a state of dormancy. Turtles and frogs bury themselves in lake bottom sediments, or rest there in a state of torpor. Amazingly, these creatures can absorb dissolved oxygen through their skin, or persist at near-zero blood oxygen levels for months. Fish, on the other hand, typically need to move- at least slightly- in order to pass water over their gills and absorb oxygen. Warmer water specialists like bass and bluegill seek out the calm, slightly warmer water near the bottom and remain quiescent, reducing their movement and metabolism to conserve energy. Others, like chain pickerel and yellow perch, are better adapted to the cold and slightly more active. Ice anglers know that these species are fairly easy to tempt into biting a hapless minnow under the ice. Still other fish species are true winter specialists-  lake trout and landlocked salmon are undeterred by cold temperatures, even seeking out the coldest water just under the ice since it holds more oxygen. (Carrie Deegan) Haley Deegan, the author’s daughter, pulls a chain pickerel from under the ice on Gile Pond in Sutton in this photo from 2021.

Lake ice may seem an inviolable reality of winter, but we should not take it for granted. There is ample evidence our ice cover is getting thinner and shorter in duration as a result of climate warming. A recent State of NH lake trends report revealed that “ice out” dates (the day that lakes fully thaw in spring) for 31 of our lakes are averaging about 2 weeks earlier than in the 1930s. Instead of early May, we now expect ice out to occur in mid April. Even more disturbing, scientists have predicted that as many as 5,600 Northern Hemisphere lakes that now consistently freeze over will cease to do so by the end of this century. Larger and deeper lakes are most vulnerable, since it takes a longer stretch of consistently cold air temperatures to chill the entire water column. Thankfully, New Hampshire’s lakes are still freezing, but several in neighboring states (e.g. Lake Sebago in Maine or Lake Champlain in Vermont) now freeze over in fewer than 50% of our winters. 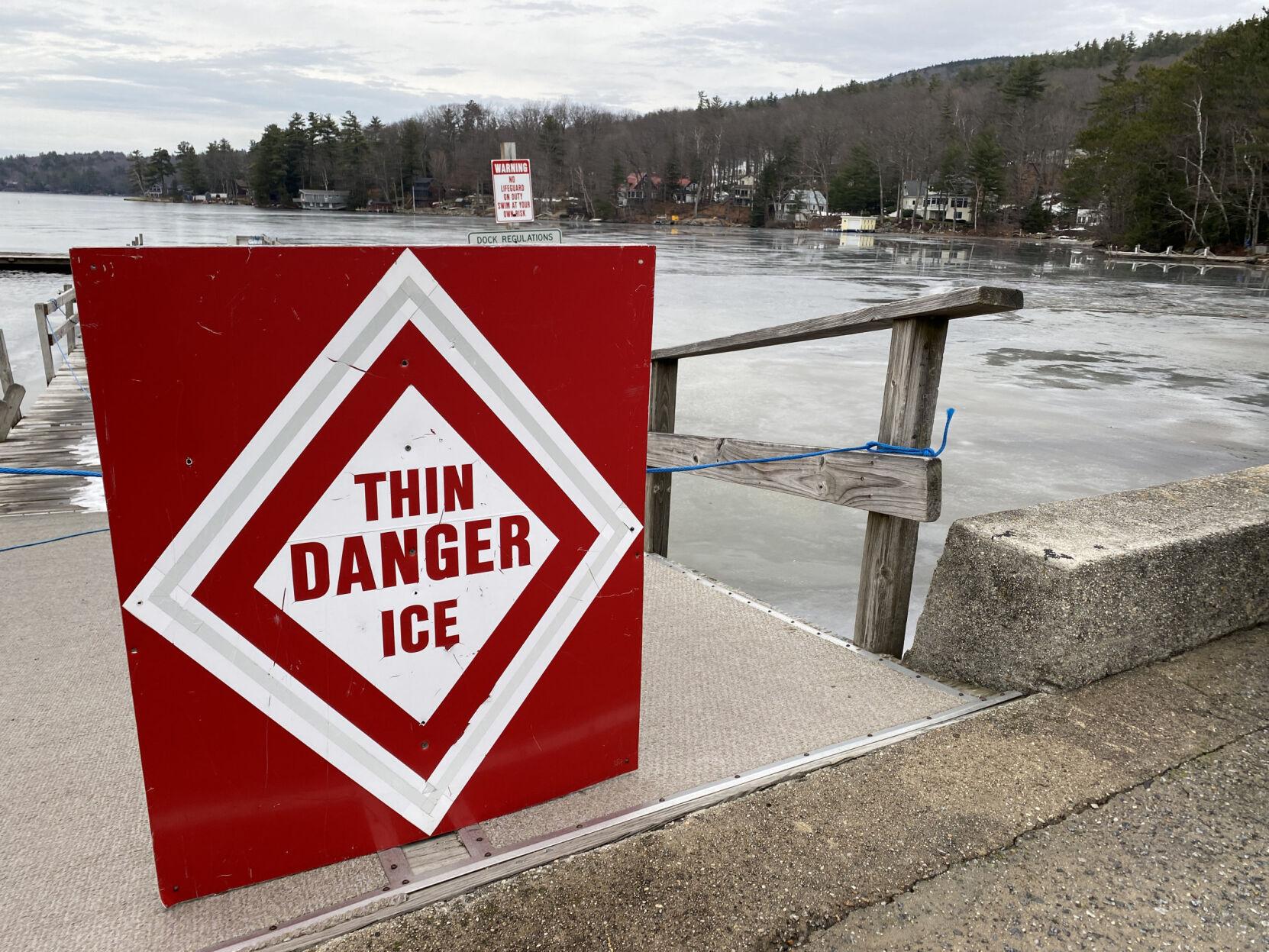 (Carrie Deegan) Ice around docks and boathouses can remain open or very thin throughout the winter season as many people have bubblers that create constant water movement and discourage ice formation.

What will the consequences be if our lakes no longer freeze in winter? Economic and social repercussions we can quantify, with the loss of ice-related recreational opportunities like snowmobiling and ice fishing. But ecologically, we aren’t entirely sure. Aquatic ecosystems have been studied most thoroughly in the warmer months, and much remains unknown about how trophic food webs, water chemistry, and species diversity will react if our lakes don’t achieve seasonal turnover and freeze over.  Some predictions include warmer summer water temperatures leading to more frequent algal blooms, issues with oxygen depletion near lake bottoms if spring and fall turnover do not occur, and loss of those species most highly adapted to cold water. On the bright side, scientific models also predict that we can significantly slow or even maintain ice loss at current levels if we’re able to curb greenhouse gas emissions and maintain colder winter air temperatures.

If you head out on the ice this winter, enjoy the experience, and be safe. New Hampshire Fish & Game has some helpful ice safety tips and best practices at https://www.wildlife.state.nh.us/outdoor-recreation/ice-safety.html. While you’re out there, take a few moments to appreciate all the life and survival going on beneath that layer of frozen water under your feet. Learning about the changes already facing New Hampshire’s lakes is the first step to taking actions and supporting policies that will result in a solid future for our lake and pond ice.