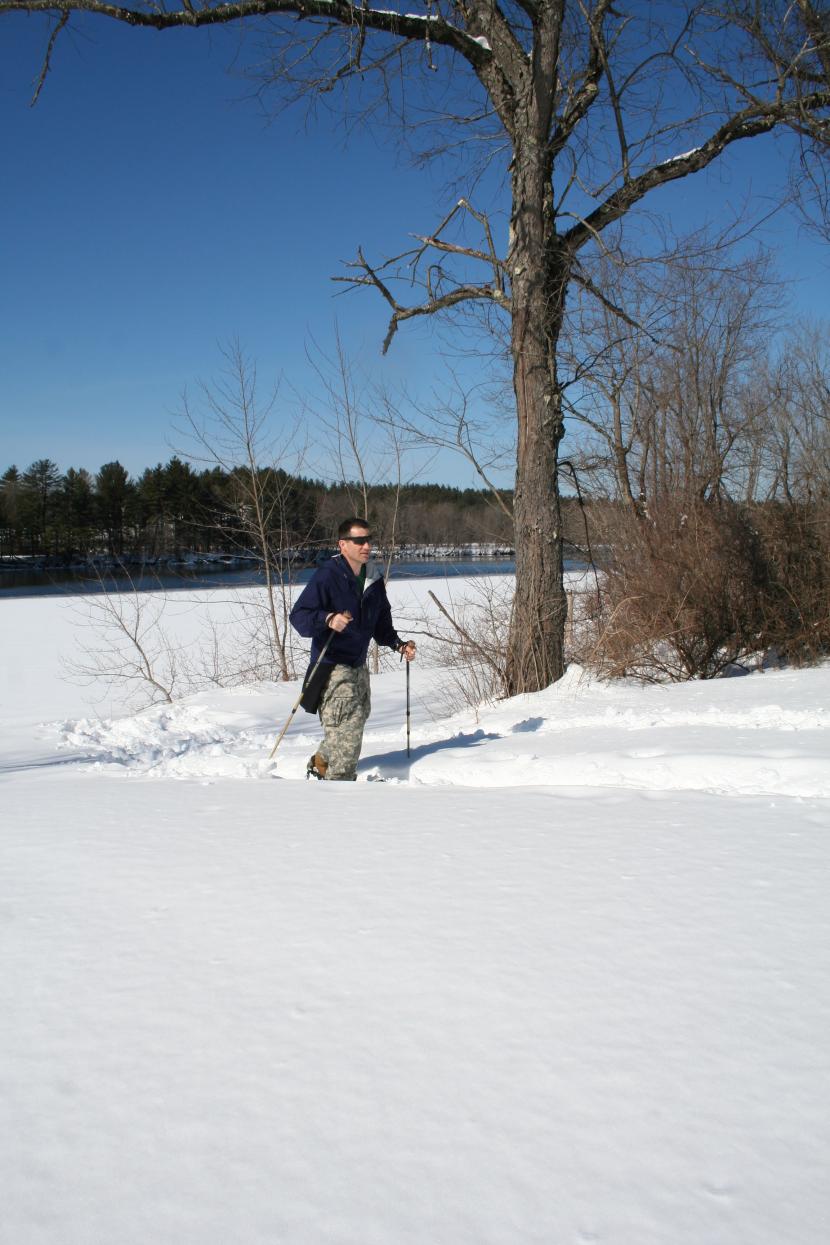 Steve Couture had just trekked across a field on snowshoes and come into full view of the Merrimack River in Hooksett when he stopped to look up, joking that it would be a perfect time for a bald eagle to fly over.

Not for about five minutes, anyway. Then, suddenly there it was, flying purposefully upstream as if it knew it was late.

“There’s its white tail!” Couture said, squinting up into the blue sky.

The moment was particularly exciting to Couture, chair of the Hooksett Conservation Commission, because protecting bald eagle habitat is one of the plethora of  reasons the town has partnered with the Forest Society to conserve a good chunk of the last remaining undeveloped Merrimack riverfront south of Concord. So far, the town has purchased 116 acres of land abutting the river (including a two-acre island) and has donated a conservation easement on it to the Forest Society. A similar arrangement on about 15 more acres is still in the works.

This project has engendered widespread public and private support for the abundance of conservation and cultural values inherent in the mix of fields, floodplain forests and – most importantly – frontage on the magnificent Merrimack.

“It’s our jewel,” Couture said. “There’s nothing like it – this is riverfront!” 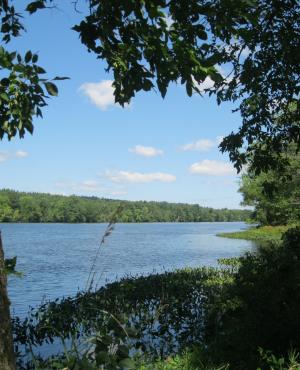 The successful conservation of the land, situated fittingly enough off of Merrimack Street, rewards at least 10 years of effort that started, as most successes do, with a targeted vision written into the town’s master plan of 2004.

“We surveyed the entire town and found five specific areas deserving of conservation, and this was one of our top five priorities,” said state Rep. Dave Hess, a member of the conservation commission who has been a driving force behind the project. Hess said the location of the land, within half a mile of both Hooksett Village and Suncook Village, is ideal for conserving a community open space for recreation as well as education.

What first drew the attention of the conservation commission, however, were the fertile corn and hay fields still being farmed – a rarity in this highly developed area neighboring Manchester. Proposals for its development gave community members the “little kick” to get moving on the project, Couture said.

“This is agriculture’s last stand in Hooksett,” he said. “When people walk out here, they’ll be able to see some agriculture and have that connection to their food.”

The vision for the land includes new hiking trails that would connect to regional trail networks. The local Kiwanis Club has offered to help the conservation commission create and maintain the trails much as it did at the popular Heads Pond Trail previously. “For years, we wanted to link the N.H. Heritage Trail that goes north to south. Right now there are only a couple of places where it’s not linked, and Hooksett is one of them. We would love to see that land become part of the Heritage Trail,” said state Rep. Frank Kotowski, who serves on the Kiwanis Club’s board of directors as well as on the town’s planning board.

Someday, someone walking those trails or exploring the woods might come across – or trip over -- evidence of the land’s historic relevance: old, half-buried bricks. The land is the site of the once-bustling Head & Sons Brickyard, where mostly immigrant workers harvested the clay soil along the river and baked it in massive networks of wood-burning kilns and drying sheds between roughly 1850 and 1930. Hooksett bricks built Manchester’s Amoskeag Millyards and City Hall, and further built the Head family’s wealth and influence. Natt Head was governor from 1879 to 1881, and his mansion (brick, of course) still stands above the newly conserved land on Merrimack Street that was settled by his ancestors in the 1600s.

“When you think of the town’s development, first the mills, then the brick industry, and the immigrant population that came from Canada and put their roots down in Hooksett – it’s where we came from and it’s what built the town,” said Kathie Northrup, director of the Hooksett Heritage Commission.

Old photos of the brickyards show the downside of the early industry, too. Few trees can be seen along the river, where instead wooden structures stretch far and wide. In the decades since, trees have reclaimed the land that isn’t still used for agriculture. Wildlife has returned to find a niche –  wildlife that includes the recovering bald eagle, a species that depends in New Hampshire on rivers like the Merrimack that hospitably offer an open-water fishery all winter.

Bald eagles also depend on tall trees along the river to use for perching, roosting and nesting, and volunteer monitors have documented bald eagles roosting in white pines across the river from the newly conserved land. There may be reason to believe that a pair may actually nest nearby in the future, according to N.H. Audubon senior biologist Chris Martin. Martin has been working with state and federal counterparts for more than 25 years on recovery efforts that have grown the breeding population from a single pair in 1989 to 20 known breeding pairs today.

“We have seen steady use by a pair of adults in that area, suggesting we might see nesting in the future,” Martin said. “It’s very promising. It’s a very good time to be conserving riverfront on the Merrimack.”

The Merrimack Riverfront Project has engendered strong and broad support in recognition of the land’s value for recreation, wildlife habitat and cultural heritage. More than $300,000 has been raised to date to be combined with money from the Town of Hooksett’s conservation fund for this project. Major donors include the Land and Community Heritage Investment Program (LCHIP), and the Aquatic Resources Mitigation Program (ARM) administered by the state Dept. of Environmental Services (DES), the Hooksett Heritage Commission, The McIninch Foundation and the Samuel P. Hunt Foundation, as well as a major anonymous donor and other generous individuals.

“We’re very grateful to all the donors who have made this possible, and we’re glad to partner with Hooksett community members to help protect a great property, said Jane Difley, Forest Society president/forester. “The conservation easement we hold adds a permanent layer of protection for the property, ensuring that people will always be able to access it and enjoy it.”