Conservation Next at UNH 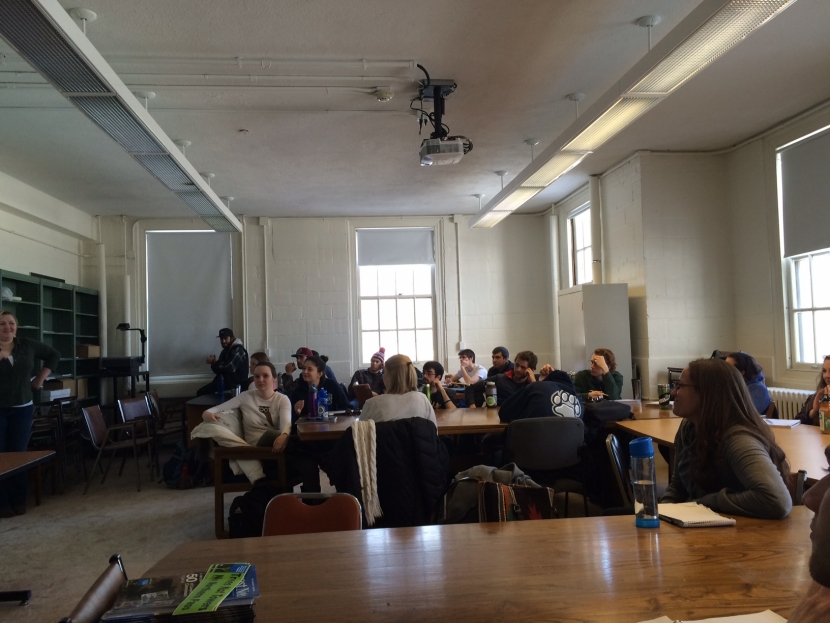 Students in the UNH Land Conservation Principles and Practices Class discuss what they care about. Forest Society photo

The upcoming generation, as represented by students in the Natural Resources department at the University of New Hampshire, thinks that we are insane. And they sound determined to make some changes.

Actually, what they really said was that we (society, and in particular previous generations) "should view wasting energy the same way we view wasting money." They think that "the waste of energy today is insane!" (Their emphasis.)

I had the privilege of visiting with about 25 students in the Land Conservation Principles and Practices Class this week. While there, I noted that a lot of people who care about conservation wonder what "the next generation" thinks about environmental issues. So I did something a little radical; I asked them. I asked them what they cared about in three broad categories: Conservation, the Environment, and Energy. What do you want the generation of your parents and your grandparents to know about how you feel about these issues?  And I promised them that if they told me, I would post their answers on the Forest Society's website.

Most of the students are from New Hampshire, coming from a fairly wide geographic distribution in the state: Nottingham, Lancaster, Hampton, Wolfeboro, Londonderry, for example. A few come from out of state-- Worcester, Mass., New Haven, Conn., and Pennsylvania. They have a fairly keen sense of their place among their peers. Those who grew up in rural New Hampshire understand that this background has instilled in them a connection with rural life and the outdoors. Those from urban environments find themselves studying in New Hampshire in part because somewhere along the way they acquired a similar connection.

They didn't have a lot of time, but they had a lot to say.

For one, they connect their place in the world, in the economy, their quality of life, directly to the health of the environment. For them, the natural world is a primary concern, and should share equal billing with careers, family, and other components of a quality life. 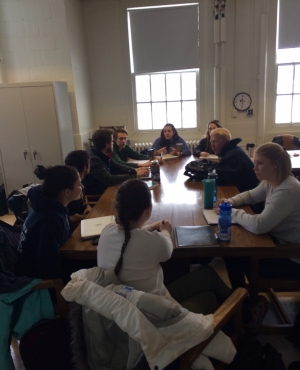 They believe that, unlike older generations, theirs is willing to make better use of resources by changing their way of life. "You can waste less and you can make lifestyle changes, and it won't impact your quality of life that much," they said with conviction and consensus. They were too polite to say it in so many words, but I think they believe that too many of their elders are too selfish when it comes to living sustainably.

I was also interested to hear this: They value the land and landscape they grew up on, and have a certain longing for the ways things were and are. They spoke of wanting a connection to elder generations through land and culture.  "We want the land we grew up on to stay how it is," they said. "We want to bring back wildlife that has been lost through the years." They used words like "intrinsic values" and "get back to roots".

Decrying overdevelopment, they asked, "Why do things always have to change when they have natural benefits?" They want to "keep ecosystem services going by preserving what naturally benefits society."

Wondering if they might be telling the guest speaker what they thought he wanted to hear, I pushed back on this. In a flash they dismissed my cynical tone. They care about this stuff.

This is not a group whose value system begins and ends with their smartphone and the quality of the wireless. They are not defined by Snapchat.

Nor are they ready to let the world go along as it has. They spoke of a need for 'ecoliteracy'.

Similarly, they express frustration with what they see as false barriers to sustainability.

"Political barriers are not allowing us to progress with renewable energy," they said. "The system creates a sense of powerlessness."

They see hope in technolgy. New infrastructure, designed to minimize waste of resources, especially energy. For this generation, such advances represent opportunity, not burden or cost. That shift in perspective alone may make all the difference for their own kids and grandkids.

A grad student involved in the class had this to say: "Where possible, I'd ask the older generations to upgrade their homes for energy efficiency.  This saves energy now (and money for current homeowner bills), but also means that houses are in better shape when you're preparing to sell and the younger generation is prepared to purchase.  Often older homes that are within price ranges younger individuals/couples/families can afford are outdated in terms of energy use and need work to improve energy efficiency to save money on bills, etc (ie upgrading old furnaces, adding new insulation, updating/re-glazing windows, on-demand water heaters, etc).   While more established homeowners might not notice the impact of high energy bills on their disposable income, bills can be a huge impact for earlier career homeowners.  Often new/younger home buyers have to use all their funds just to buy a house and don't have resources to upgrade for several years.  This can create a false incentive to buy a newer house that has all these upgrades, but might add to development pressures on open space.  If older houses were upgraded by those with more disposable income, it might improve the incentives to buy an old house and limit sprawl."

And, to those of us in established conservation and environmental organizations, there was this suggestion: "Remember what it was like to b​e our age.  There is a lot of hope, but also a lot of cynism that the systems could actually change to address what the younger generations are concerned about. Think about ways to tap into that desire by creating opportunities to connect to on-going work/organizations (like that of the Forest Society, etc).  Look for the pathways to bring younger generation in as part of the solution.  It does seem that many environmental/conservation oriented organizations and agencies originated in their current form in the 1970s and 1980s and the same individuals are still involved creating a perception that there isn't space for the next generation to join in.  Who will carry the legacy forward?"