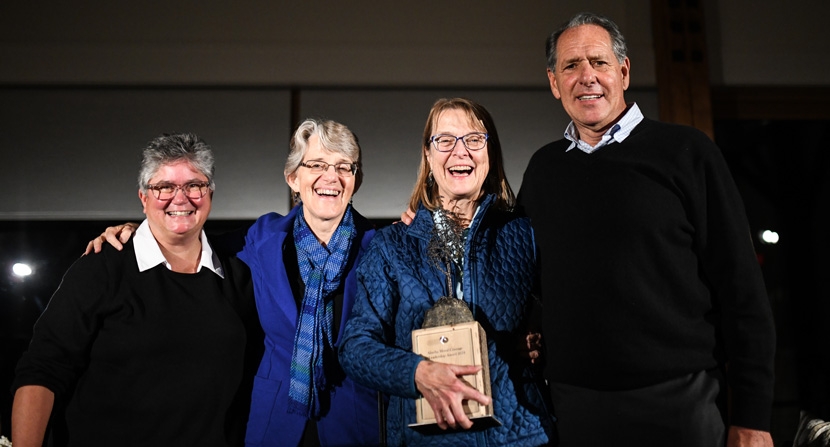 President/Forester Jane A. Difley was presented with the first ever Alnoba Moral Courage and Leadership Award 2018 by Alan Lewis, CEO and co-founder of Alnoba (far right). (From left, Martha Prybylo of the Lewis Family Foundation; Susanne Kibler-Hacker, then Forest Society vice president for development; Difley; and Lewis.) Difley retired in 2019. After his sudden passing, New Hampshire conservation leaders lauded Lewis' outsized impact in the state and beyond.

“Alan Lewis was a visionary whose leadership, insight, and support had meaningful and lasting impact on communities and the environment across New England and around the world,” said Bradley Campbell, president of the Conservation Law Foundation. “His approach to philanthropy, shaped in close partnership with his wife Harriet, spurred everyone he touched to greater ambition and more strategic thinking aimed at changing the world. At Alnoba, he created a hub connecting courageous advocates, forward-looking businesses, and thought leaders from dozens of countries, whose ongoing work to build community, advance social justice, and protect the planet ensures that Alan’s legacy will long outlive the grief of his passing.”

“With Alan’s passing, we’ve lost a passionate believer in the power of changemakers – people, organizations, and businesses working to change our world for the better,” reflected Brian Hart, executive director of SELT, the Southeast Land Trust of New Hampshire, a non-profit land conservation organization based in Epping, New Hampshire. “Alan also understood the power of place, shown by the success of his businesses, but also his vision of Alnoba as a gathering place for changemakers. Through his and the Alnoba Lewis Family Foundation’s support, Alan encouraged many organizations, including SELT, to dream big and lead the change needed in this world. His support was critical to permanently conserving the Bodwell Dairy Farm in Kensington, the Monahan Farm in East Kingston, and Stonehouse Forest in Barrington, all beloved places that will be enjoyed for generations to come.”

“Alan loved the underdogs and always pushed for audacious goals,” said Jack Savage, president of the Society for the Protection of New Hampshire Forests. “He jumped in to support the Forest Society during our campaign to conserve 5,800 acres of land at The Balsams in Dixville Notch. The project embodied his style… an aggressive goal with a short timeframe to achieve a spectacular result.”

“Alan Lewis was not only generous to the causes he cared about, but he was also a vibrant, energetic, and inspiring supporter. He wanted organizations to succeed in making the world a better place, a greener place, a more equitable place. And he motivated – demanded – leaders to stretch to achieve even more than they thought possible. I find it difficult to imagine that someone so full of life is no longer among us,” said former Forest Society President/Forester Jane Difley upon learning the news of his death.

“Alan Lewis and his family have stepped in to support a vision of New Hampshire’s clean energy future at a time when the need could not be more pressing,” states Sam Evans-Brown, executive director of Clean Energy NH. “Alan’s passing will leave a void in this space that will be impossible to fill, but the investments that their foundation makes in training and resourcing environmental leaders will continue to pay dividends with a new generation of young pioneers making waves in the years to come.”

Courageous leadership in the face of extreme adversity was the unique human quality that Alan Lewis identified as crucial for the betterment of humankind,” noted Daniel Clapp co-owner of ReVision Energy. “He dedicated his life to finding leaders throughout the world so that he could amplify their courageous voices and celebrate their selfless heroic deeds committed for the benefit of humanity and the natural environment. Alan's relentless pursuit of a better future, entwined with his equal partner Harriet, manifested itself in his writings, his business affairs, his impactful philanthropy, and their co-creation of Alnoba, a shining mecca of environmental sustainability and shrine to the very essence of courageous leadership.”

“All of us at ReVision Energy were bursting with pride and gratitude when Alan welcomed us as Alnoba's clean energy partner more than a decade ago. Those feelings have only deepened throughout the years as we joined forces to accelerate the energy transition in northern New England and to bend society toward justice, equality, and diversity. We will miss his leadership but know his impact will be felt for many years ahead.”