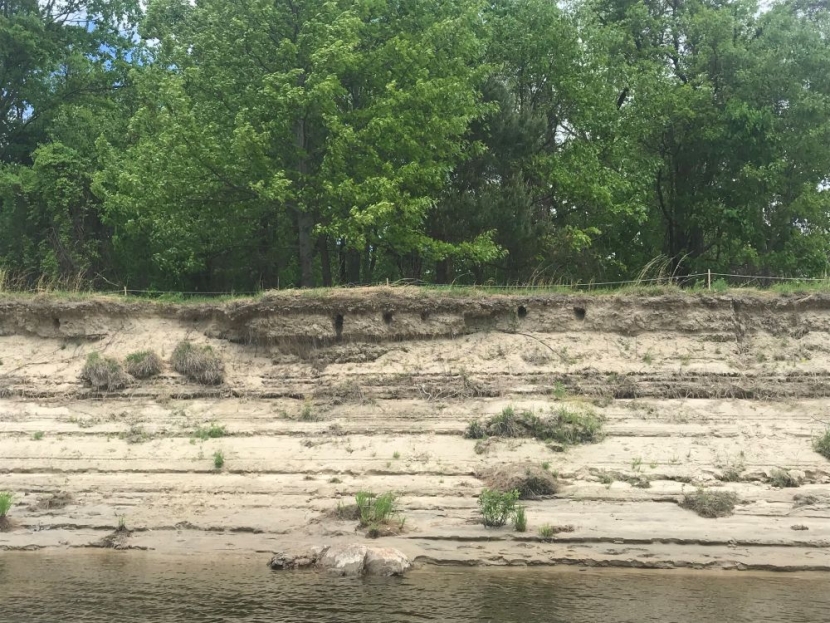 Forest Society Managing Forester, Wendy Weisiger was paddle boarding on the Merrimack River when she observed the bank swallow nesting colony at the Forest Society Merrimack River Outdoor Education and Conservation Area.  The popular trails along the floodplain have an area roped off along the top of the riverbank to protect and preserve the intergrity of sandy bluff.

Wendy said "you can see the new bank swallow nests and they were very active while I was there. I tried to get video but the current was too fast!. The swallows nest tunnels are located above where the river floods in springtime."   The Merrimack River water level is controlled by the US Army Corps of Engineers system of dams located higher in the watershed. 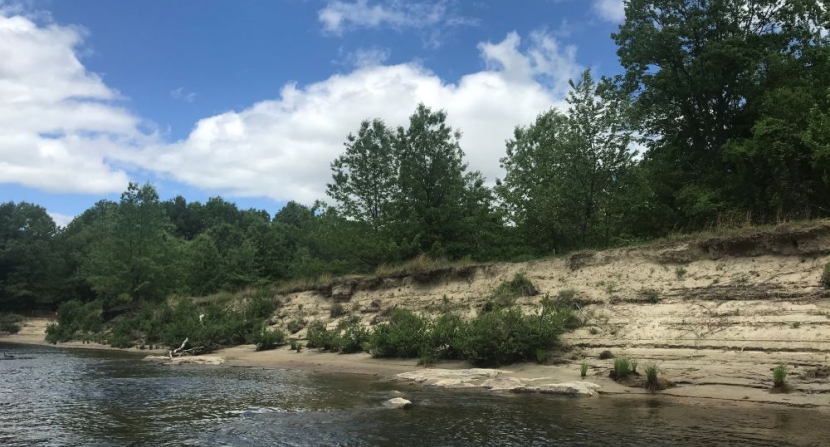 Bank swallows are the smallest of the North American swallow species.

They have a large head, short pointed wings and a slightly forked tail. They are most commonly seen in feeding flocks associated with nesting colonies in dug as a series of tunnels dug into vertical sand or gravel banks along rivers or road cuts or gravel pits. 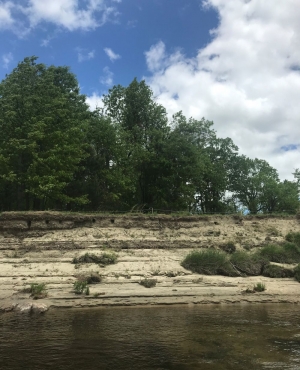 Both males and females help to excavate the nesting tunnels by first digging with their bills and then pushing material with their tiny feet to the entrance as they deepen the tunnel to the nest chamber.  Nest colonies are densely packed with individual nesting holes often located no more than a foot apart. The tunnel is typically 2 to 3 feet deep but may be as much as 5 feet deep as a protection from riverbank predators such as raccoons. The nest chamber at the end of the tunnel is built of grass, weeds and rootlets and lined with feathers. Large colonies can include several hundred nests densely packed into the vertical bank over water.

Nest colony activity is sychronized so incubation, feeding, brooding and fledging seasons occur for all nests at the same time.  Typically the clutch contains 4 to 5 eggs. The incubation period is approximatey 15 days and young leave nests in 18 to 24 days after hatching. The entire colony is vulnerable to predation of disturbance for at least the 40 to 50 days of the late spring and early summer during the active nesting period. 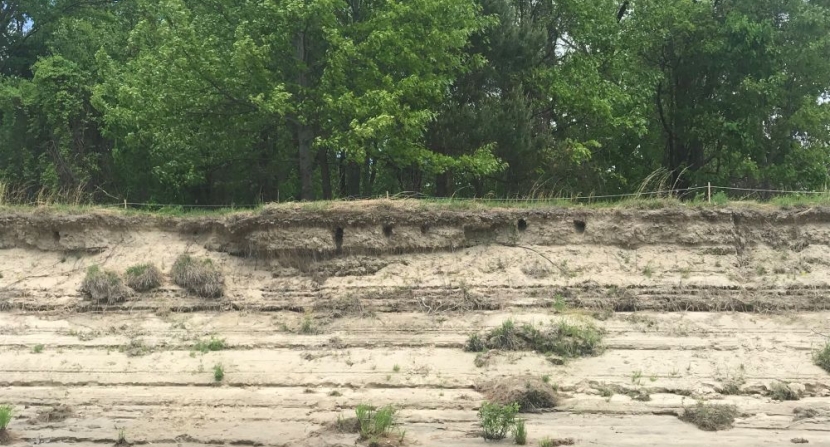 Another view of the Bank Swallow nests.

Local bank swallow populations vary with the availability of good nesting colony sites. The loss of nesting sites to flooding, predation, human disturbance or development may be contributing to long-term declines in overall populations of bank swallows across their breeding range.

Weisiger adds "the photos show why we work to keep people and their dogs off the Merrimack River bank. The nest tunnels would be obliterated by foot/paw traffic.  This is obvious as you paddle past because the places that have paths to the water's edge from people and dogs swimming do not have any nesting swallows."

Signs and the rope and stakes placed along the top of the riverbank trail are designed to protect the nesting colony.

Please help us to conserve the wildlife habitat of the Merrimack River Floodplain when visiting for hiking or swimming.