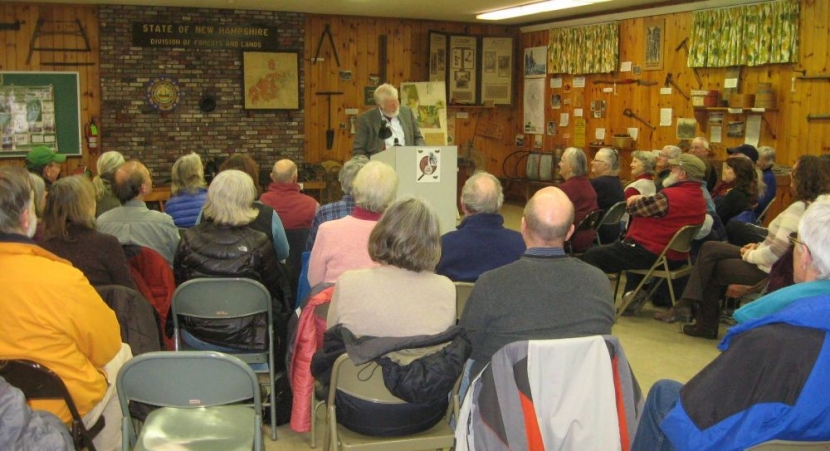 The 2015 Cottrell-Baldwin Environmental Lecture Series concluded Tuesday, March 31 at Fox Forest in Hillsboro. A total of 163 people attended the four presentations focused on the history of changing NH land use - from forests to farms and back again.

Participants learned about Eastern National Forest issues and futures from forest historian and author Dave Govatski and watched The Peoples' Forest, a film documentary about the creation of the White Mountain National Forest with filmmaker David Huntley-Moore. Former Commissioner of Agriculture Steve Taylor, a dairy farmer and talented storyteller, recounted the boom and bust and contemporary resurgence of NH farming at a smaller scale. Taylor shared tales of the "Great Sheep Boom," The NH Grange and more recent innovations: The Chicken of Tomorrow program and milking robots appearing on New England dairy farms!  The series concluded with a sigh: Oh, To Be Young Again was presented by wildlife habitat biologist Jim Oehler from the NH Fish & Game Department with a focus on efforts to create new areas of young forest for wildlife species specialized to live in these ephemeral habitats.

Comments from many participants expressed enthusiasm for this successful, annual lecture series, a cooperative offering co-sponsored by The Forest Society and the NH Division of Forests and Lands, Caroline A. Fox Research and Demonstration Forest.  The annual March Cottrell-Baldwin Environmental Lecture series honors the environmental and scholarly legacy of Annette and Bill Cottrell of Hillsboro and of the State's first Research Forester, Henry Ives Baldwin.

As sponsors, we thank all the participants for coming to the Henry Baldwin Classroom at Fox Forest. We owe a debt of gratitude to our speakers for their time, talent and expertise. ALL participants enjoy getting out during the late winter "cabin fever" season to learn about NH wildlife, landscape history and what makes NH special and unique.

We look forward to having you join us next winter!