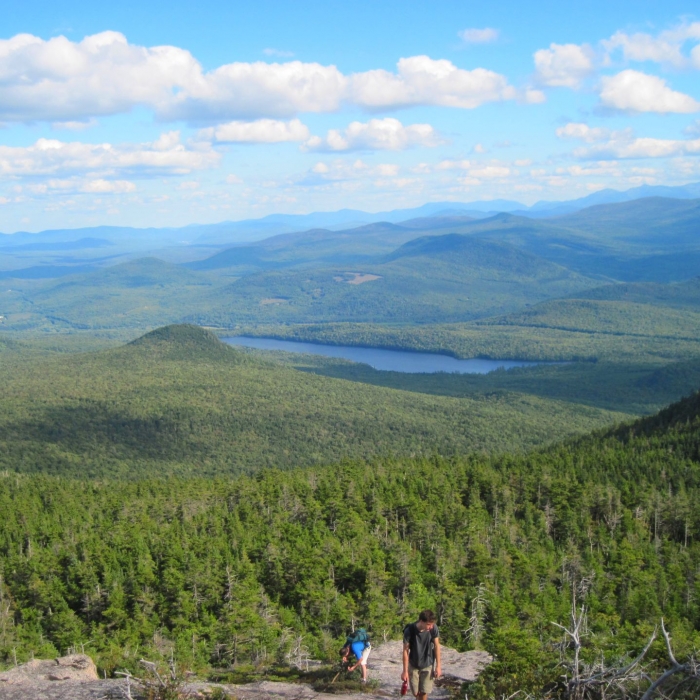 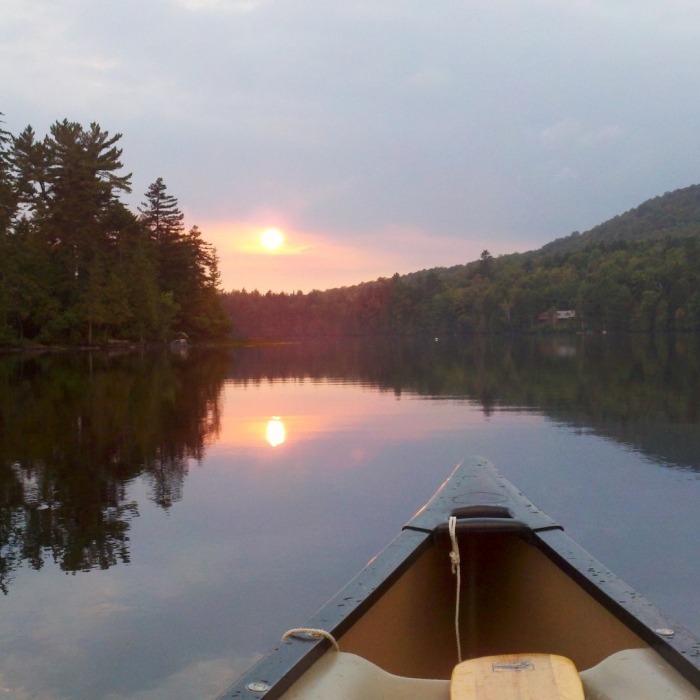 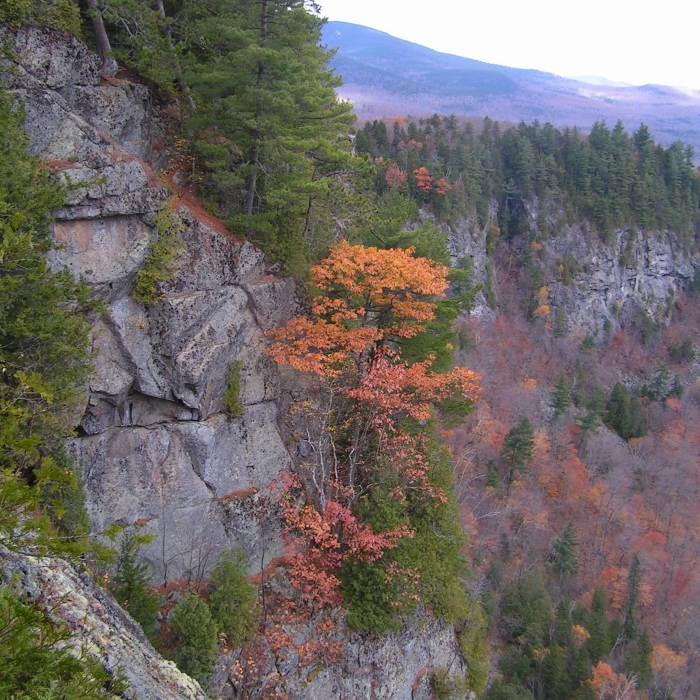 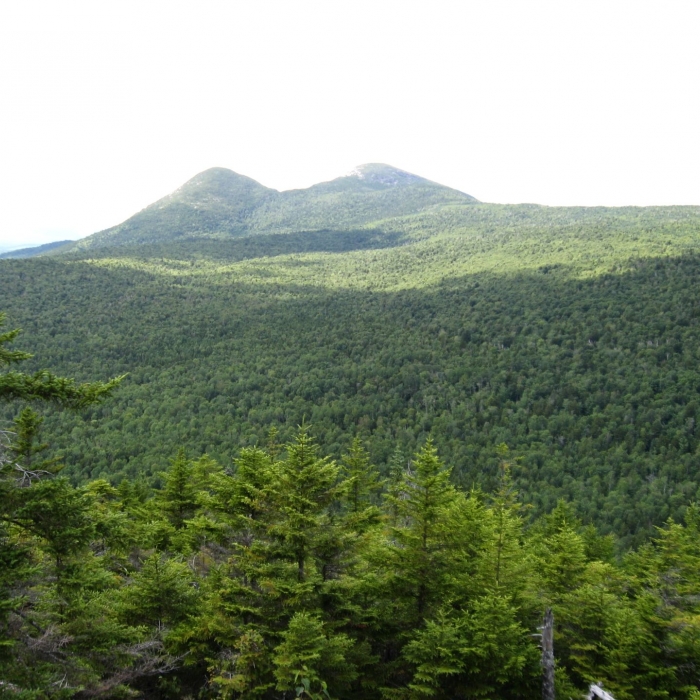 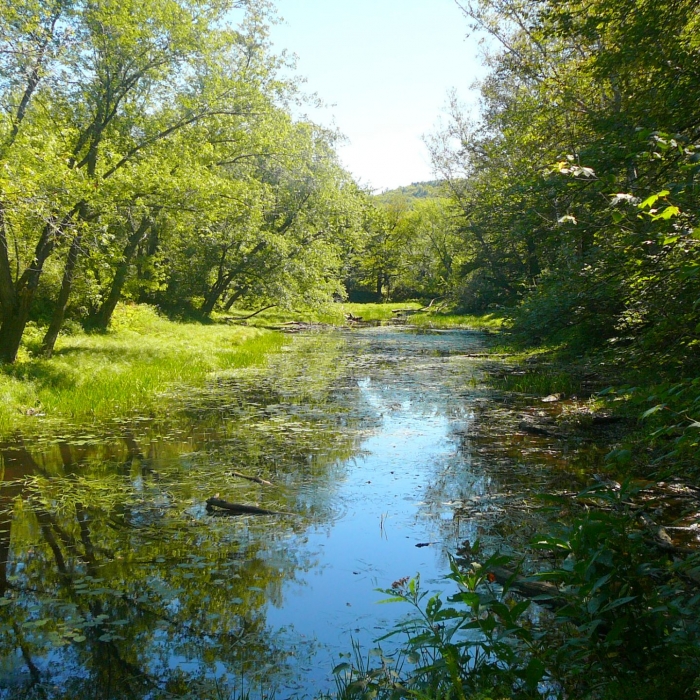 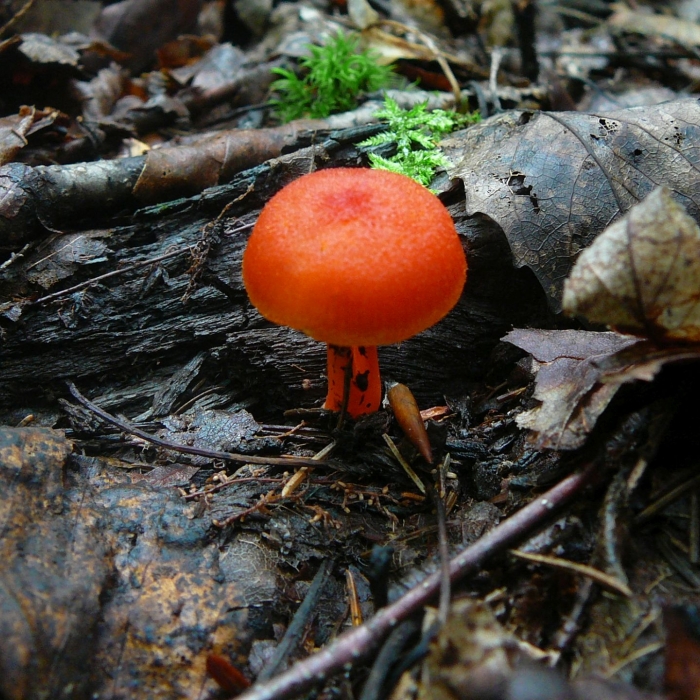 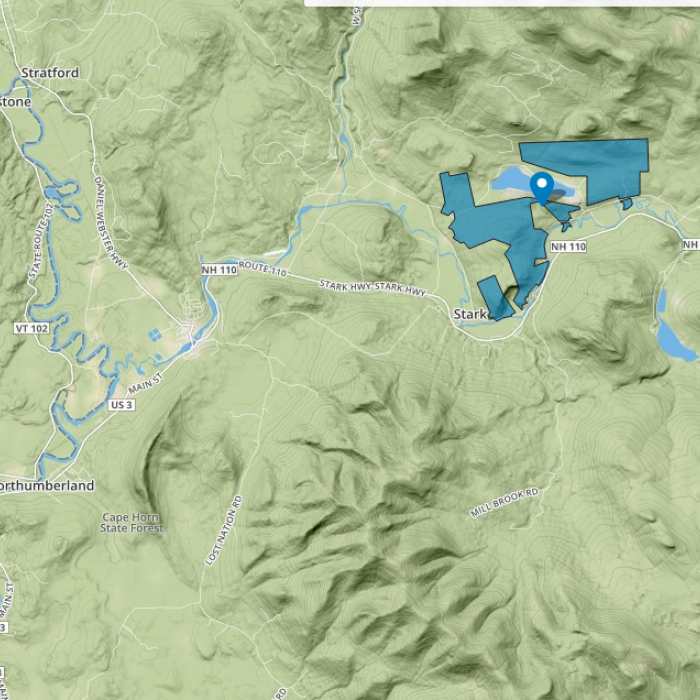 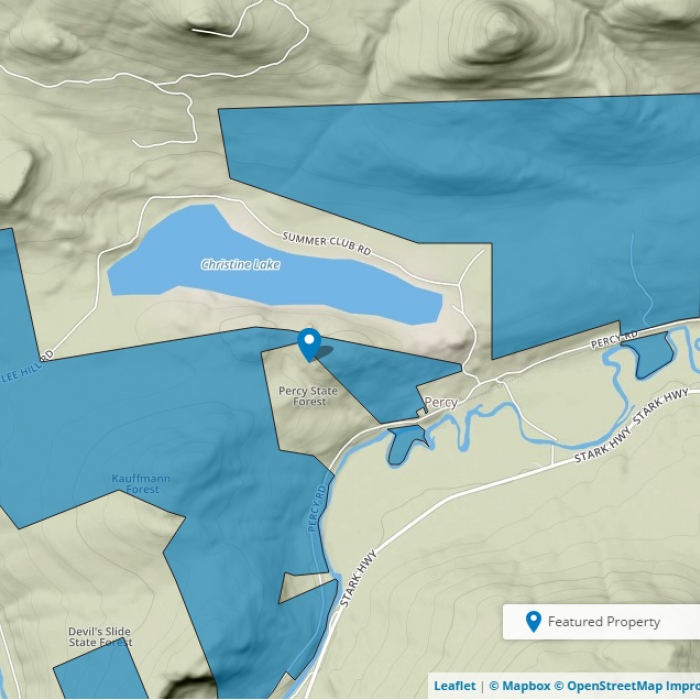 The Kauffmann Forest surrounds the land at Christine Lake owned by the Percy Summer Club. The club's land is protected by a conservation easement held by the Forest Society. Combined with the state-owned Nash Stream Forest, these conservation lands comprise the entire watershed of beautiful Christine Lake. If you visit Christine Lake with a canoe or kayak, you will experience the closest thing to a wilderness lake in the state. This is a trout fishery that also hosts nesting loons. Ospreys and bald eagles are also often seen. The lake is open to the public, and boats with a maximum of 10 HP are permitted. The private lodges at the west end of the lake date to the late 19th and early 20th centuries and belong to the members of the Percy Summer Club. (Please do not disturb the privacy of the lodge owners.) The club owns the land at the east end of the lake and permits public use in that area.

The Kauffmann Forest is a large area of relatively wild lands and working forest. The westerly and southerly sections have been carefully managed to produce quality northern hardwoods. Higher elevation areas and some riparian and wetlands contain rare plants and have been set aside as eco-reserves.

For those with interest in a challenging hike, the trail to the top of the Devil’s Slide produces a beautiful view of Stark and the peaks of the Kilkenny Range of the White Mountain National Forest. Botanists and geologists will find the Slide interesting, as it is part of an ancient ring dike that hosts plants uncommon to this northerly region.

Thanks to the vision and determination of John Kauffmann, the entire watershed of Christine Lake (a 175-acre lake) is now conservation land. A public road takes you to the small public boat launch owned by the state.  You can launch small boats (under 10 HP) and fish for brown and brook trout.  This was a typical cold-water fishery until very recently when someone illegally put small-mouth bass into the Lake.  It is illegal to move live fish from one body of water to another, and unfortunately, less thoughtful people have moved their favorite fish into places they don’t belong, like Christine Lake.  But the trout are still here, although in reduced numbers from past decades.  The Kauffmann Forest itself does not touch Christine Lake, so please be respectful of the private landowners and follow the rules posted at the boat launch.

There is a small parking lot near the Devil’s Slide trailhead on Northside Road, but no Forest Society sign or kiosk. The trail is straight into the woods going east from the parking area.

Enter the woods on what appears to be an old road. The entry of the trail is currently marked with blue ribbons, and the trail itself is marked with pink ribbon. The trail will “T”, at which point you turn left. After another hundred or so yards, the trail turns right and goes up the hill. The trail gets steeper at you go further up the slide. Continue to the top of Devil’s Slide, a large vertical rock formation that looms over the village. Exercise EXTREME CAUTION as you reach the summit, as the drop-off the south side of the slide is nearly vertical. Return to your car by the same route. 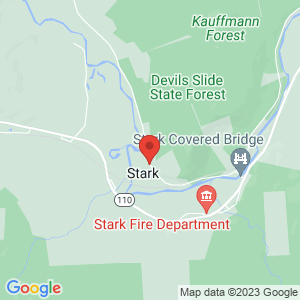 There is a parking lot at the end of Christine Lake Road near the public boat launch. The public road to the lake is designated for boat launching, but the parking areas are actually on land owned by the Percy Summer Club. Please respect the area and pack out all trash.

From the Christine Lake parking area, walk back down the road and turn left onto the Summer Club Road. You will pass signs indicating this is a private road. Visitors to the Kauffmann Forest are permitted to walk on this road but must not park along it. After about 100 yards, fork right up the hill onto the Kauffmann Forest. You can follow this trail to the northerly boundary of the Forest, where the trail crosses Rowell’s Brook at the boundary of the Nash Stream Forest. Return on the same route back down to the Christine Lake parking area. 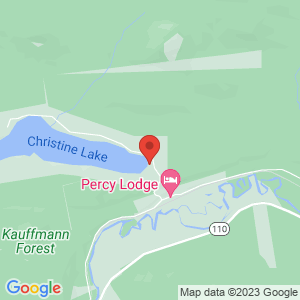 In the late 1800s a group of friends from the Washington DC area began looking for a place in northern New England where they could buy land at an undeveloped lake and establish a club. This group purchased the land around Christine Lake, believing at the time that the lake could be privately controlled. Later, after legal action established that Christine Lake and other ponds over 10 acres in size in New Hampshire are public waters, a public road was established to the lake.

The club owners built Adirondack-style lodges at the west end of the lake and over the course of a century kept the area pretty much the same. Of course, in the early 20th century much of the landscape was young forest or recently cut-over, with the exception of the south side of the lake. That area is now designated as a wild area, where centuries-old pines and hemlocks can be found.

In the early days, the club members reached their lodges by a steam-powered launch that picked them up at the east end of the lake and took them to the west end. That mode of transportation ended when a road was constructed through the woods along the north shore of the lake. For many years the club maintained pastures and fields in the hills so there would be dairy products available to the summer residents.

In the following century, the land and lodges at Christine Lake and the surrounding forest have remained largely unchanged. The forests have matured and, with careful management, regained much of the ecological diversity they had prior to European settlement. When the pastures were abandoned, they gradually returned to forest. Loons returned to the lake in the 1990s, and bald eagles once again fly over the lake in search of a meal of fish.

Much of the Kauffmann Forest and Percy Summer Club lands are managed as “working forest” under the careful guidelines of the Forest Society and the club’s conservation easement. Some portions of the land (the south shore of the lake, the top of Dickey Hill, and all the streamside riparian areas) are designated as natural areas. The club retains the rights to use and improve the private lodge area at the west end of the lake as it has in the past.

Public use of the access area at the east end of the lake started out primarily as a place to store small fishing boats, mostly owned by local citizens. Over the years, the area became a popular recreation site, and from time to time attracted users with less than respectful intentions. The club made substantial improvements to the public use area in the 1990s, and with that has come somewhat more respectful behavior. Users today are advised that no fires, littering, or camping is permitted at the east end of the lake, and the club’s property manager monitors all uses.

In 1988, when the State of New Hampshire acquired and protected the adjoining 40,000-acre Nash Stream Forest, John Kauffmann, a member of the Percy Summer Club, was inspired to try to protect the Christine Lake lands as well. Kauffmann owned a number of parcels adjoining the club land that he had either inherited or acquired from his siblings. He started the Christine Lake conservation effort in 1990 with the donation of four conservation easements totaling 190 acres at the western end of the Lake. In 1991, at Kauffmann's urging, the club donated a conservation easement on all of its land surrounding the lake, thus ensuring that no further development would ever mar its shores.

Club members George and Joan Lamphere then donated a conservation easement on 600 acres they owned north of the lake and subsequently transferred the ownership of that land to Kauffmann. Meanwhile, Kauffmann was organizing another gift, this time of the fee title ownership of all of the lands he owned in the area. In a series of gifts made from 1995 through 2002, Kauffmann donated a total of 1,919 acres to the Forest Society. This included the 600-acre Lamphere tract, all lands on Dickey Hill south of the lake, his conserved lands west of the lake, the Devil's Slide and adjacent parcels, and a parcel Kauffmann acquired from a timber investor so he could donate it to the Forest Society. Kauffmann also donated easements on lands he had purchased along the Upper Ammonoosuc River west of Stark village before selling them to local friends whose family had historically farmed the land.

In total, John Kauffmann, along with the members of the Percy Summer Club, have protected more than 2,200 acres of land on and around Christine Lake, ensuring that this exceptionally beautiful and historic area will always remain as it is today. 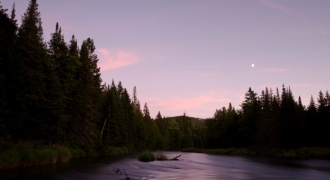 The Washburn Family Forest has long been a popular destination for anglers, hunters and snowmobilers. There are outstanding views of the Connecticut River Valley and Indian Stream from the eastern portion of the interior road system.

Alert: The Rocks' trails, fields, and parking lots will be closed to the public starting June 1 due to construction work at the Carriage Barn, except for special events and programs. Use our Reservation Guide to find other Forest Society properties nearby, including  ...