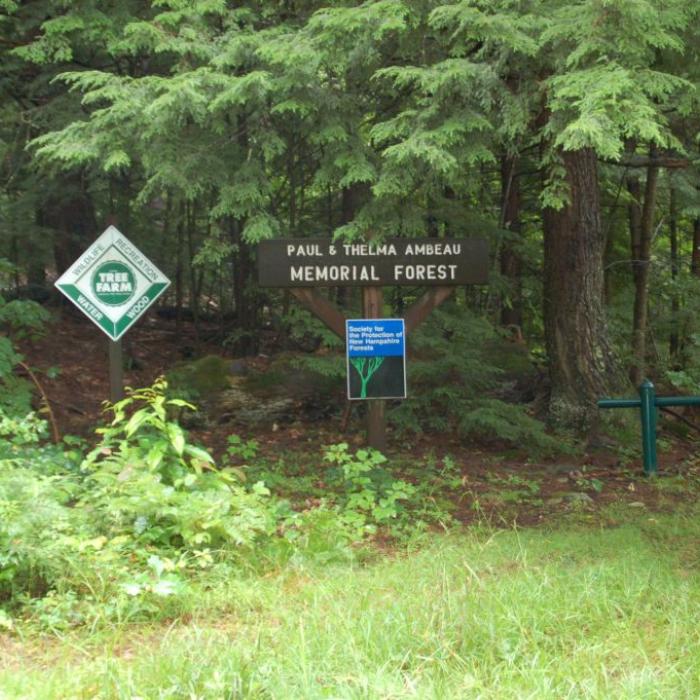 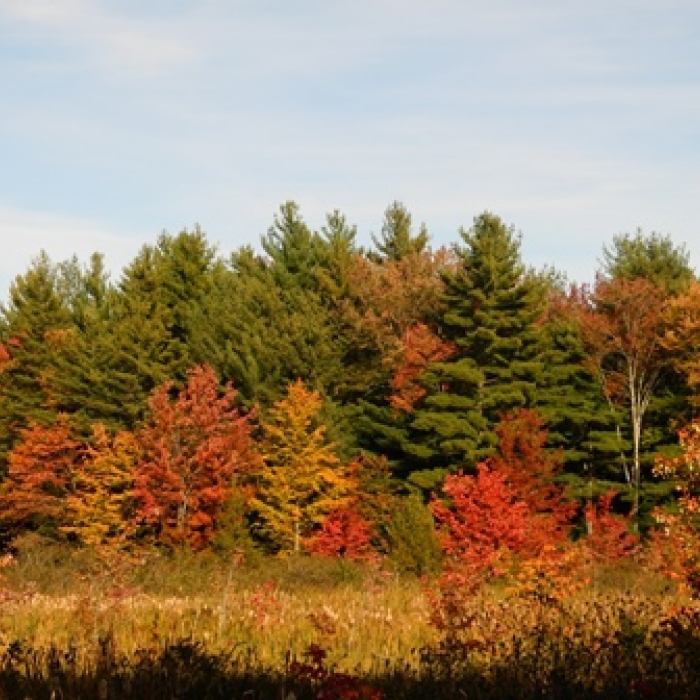 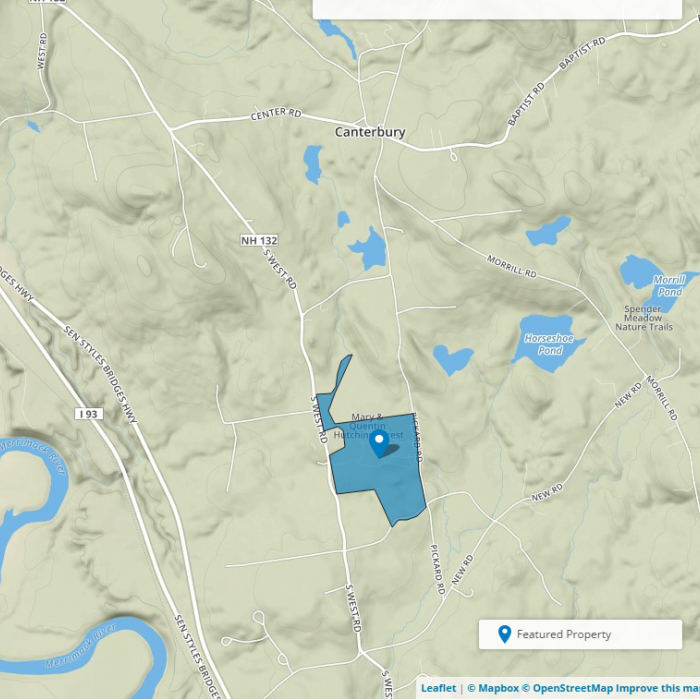 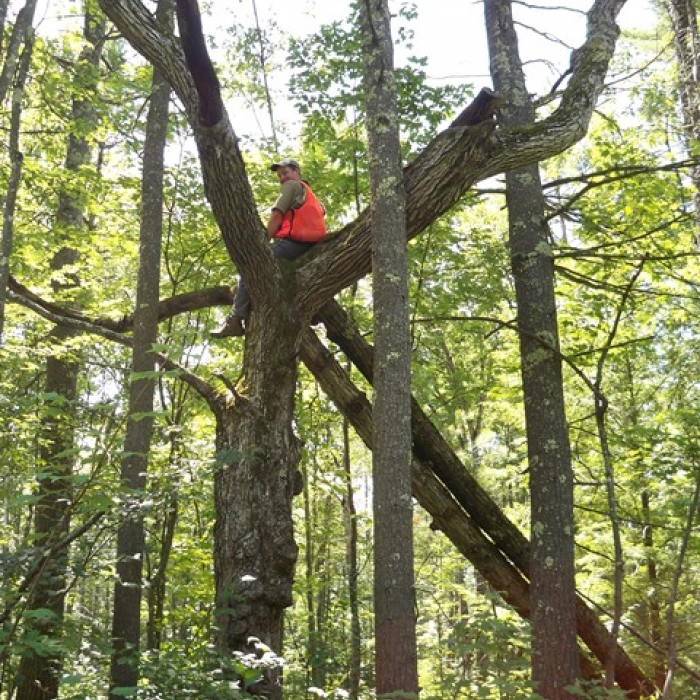 The trails pass through pine and hardwood forests that were lightly managed by donor Quentin Hutchins. You’ll see pines that were thinned and pruned many years ago, and evidence of recent forest management by the Forest Society designed to further improve the forest stands. Look for pines where the lower branches were pruned off (you can still see telltale marks in the tree bark where a branch was sawn off). There is a large beaver meadow in the northerly portion of the property, which can be seen from Route 132.

There are small, struggling remnants of the once robust population of American Chestnut growing in the understory of the forest. These trees survive by sprouting from the old root system, over and over. Sadly, as the tree stems grow large enough to be able to flower, an exotic invasive disease, chestnut blight, chokes the tree’s circulatory system, causing the stems to die.  To learn more about the effort to combat chestnut blight and return this majestic tree to our forests, go to http://www.acf.org/.

Approximately 700 feet past the trailhead on Southwest Road/Route 132, you will reach a T intersection.  Go right here around the Tree Farm Loop.  At the next three trail junctions, turn left until you have completed the 0.5 mile loop. At the fourth junction (the original T intersection), turn right to return to the trailhead.

Approximately 700 feet past the trailhead on Southwest Road/Route 132, you will reach a T intersection. Turn left here. In 0.12 miles you will reach the wetland edge of Burhnam Brook. Turn right, following the trail as it parallels the southern bank of Burnham Brook for about 0.35 miles. About 0.14 miles after leaving the brook’s edge, you will reach a large open area which served as a log landing during past timber harvests on this forest. When you reach the log landing, walk to along its right edge to where the trail re-enters the woods again. Follow this trail 0.14 miles to the intersection with the Tree Farm Loop trail and bear left at the fork. After 0.12 miles, turn right at the junction and then make a quick left onto the trail back to the trailhead.

Approximately 700 feet past the trailhead on Route 132, you will reach a T intersection.  Go right here, and take another right after about 80 feet (do not follow the Tree Farm Loop). This trail will take you to the Ambeau Forest after crossing a footbridge over a small stream.  Once on the Ambeau Forest, a 0.5 mile loop trail can be traversed in either direction you prefer.  Return to the trailhead the way you came in.

Like so much of New Hampshire, this land was all cleared for pasture by early settlers and remained in that condition until some time in the early 20th century.  It then was abandoned from farming and gradually reverted to forest predominated by white pine. When Quentin and Mary Hutchins owned the property in the later half of the 20th century, they managed it for forest products, much of which Quentin harvested himself. He had a small saw mill on his adjoining house lot. The adjoining Ambeau Forest has a similar history of land use, but with slightly better soils has hosted a more productive forest.

Quentin and Mary Hutchins were among the earliest New Hampshire landowners to enroll in the Tree Farm system, a program that recognizes good forestry and land stewardship. After reading about a gift of land to the Forest Society in the local newspaper, the couple decided that the best way to ensure that their land would continue to be a Tree Farm and remain available for conservation education and recreation was to donate their property to the Forest Society.  Nearly 20 years later, Paul Ambeau decided to donate the adjoining 20 acres that had been in his family since 1939. This forest was also well managed, and at the time of Mr. Ambeau’s donation, it had mature white pine ready for harvest. 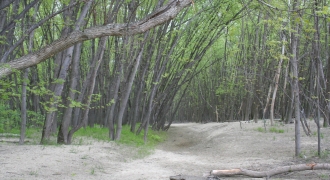 The dramatic floodplain landscape includes oxbows, back channels, and high terraces that host a dynamic collection of overlapping natural communities.

There is one small pull-off on Route 132 for a few cars to park at the trailhead to the Hutchins Forest. Trails are marked with yellow rectangles. There is another pull-off at the former log landing on Pickard Road. The landing is blocked with several large boulders.  There are no signs or maps at the landing area. There is also a gated trailhead on Pickard Road at the Ambeau property; please do not park in front of gate. Winter Access: The parking at this property is not plowed. 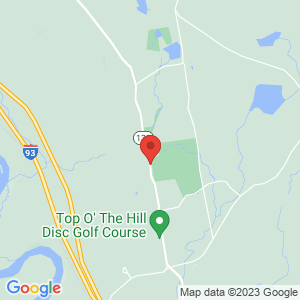