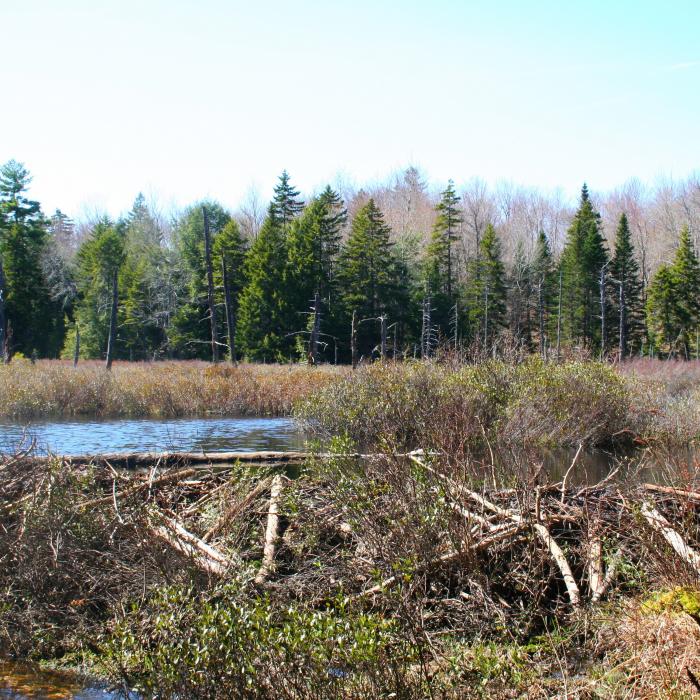 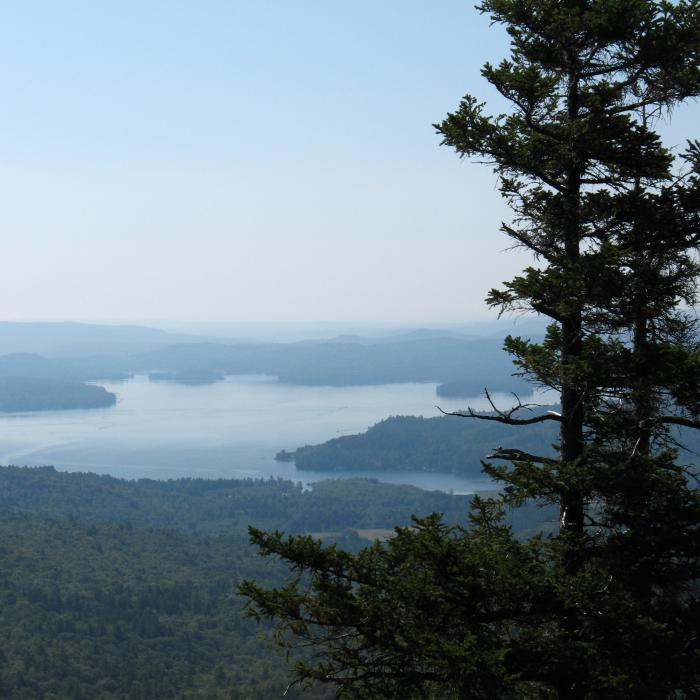 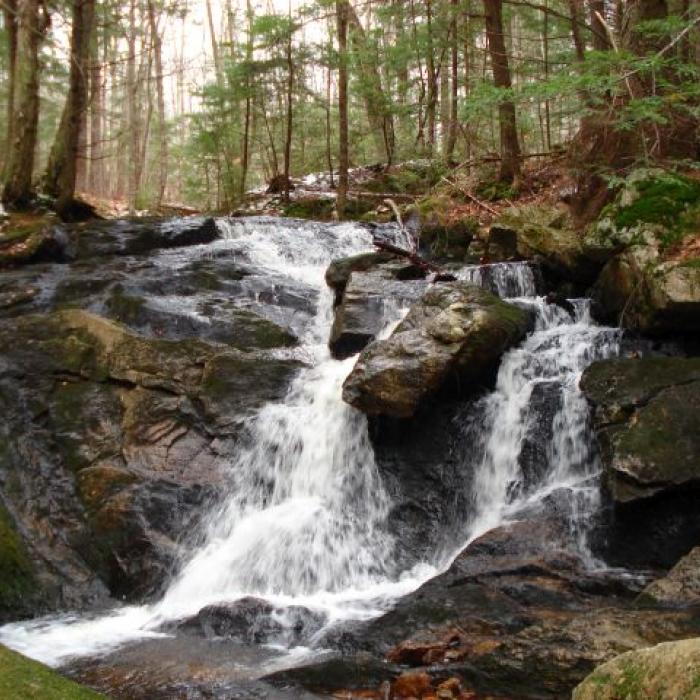 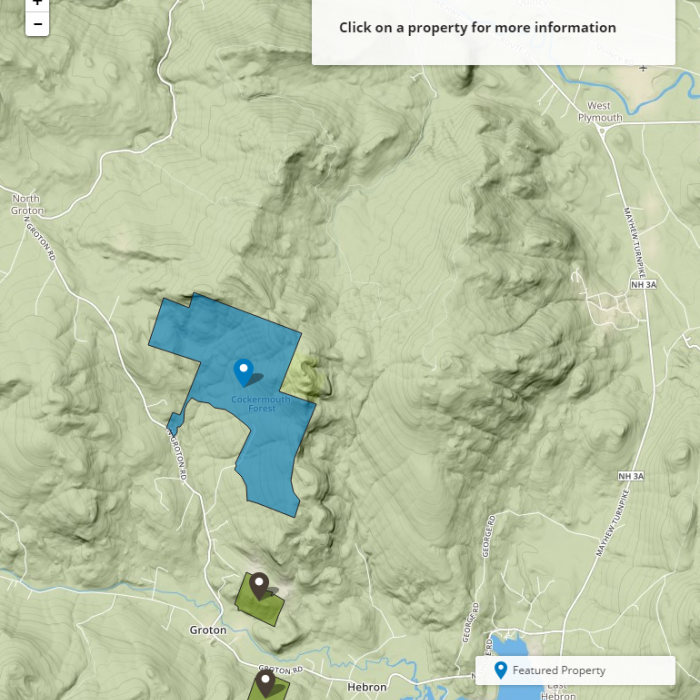 The Cockermouth Forest is a favorite for many hikers in the region, as it offers modest to strenuous hikes, incredible views and numerous opportunities for observing wildlife year-round. Visitors can choose to explore Little Pond and the views from the nearby cliffs or trek up to Mount Crosby and Bald Knob with views of the White Mountains, Squam Lake, Lake Winnipesaukee and Newfound Lake.

You can extend this hike by taking the Cliff Loop Option, which is moderate to strenuous and adds a half mile.

The High Pasture Loop takes you around the 2010 timber harvest and past the highest cellar hole on the property. You will experience a nice mix of hardwood and softwood forest with large openings along old logging roads.

The ridge trail between Bald Knob and Mount Crosby is a typical mountainous ridge trail with minor ups and downs.

The connector from High Pasture Loop to Tenney Lane is quite moderate and follows old roadways.

Aptly named, this is a no-nonsense trail with unremitting steeps and serves as a straight-shot shortcut to the summit of Mount Crosby.

This out and back hike is a great moderate alternative for an enjoyable walk through the woods on old woods roads.  It’s a great opportunity to check out old cellar holes and think about past land use.

The name “Cockermouth Forest” has historical significance in that from 1760 to 1790 the town of Groton was known as the town of Cockermouth, named for the river that runs through it.  Bill Wadsworth, who donated the land to the Forest Society, first came to the area to attend Cockermouth Boys Camp.

The internal road network, old cellar holes and the history of the Remick Place (a circa 1830 kneewall cape formerly located on the property) indicate that much of the land was farmland in the early to mid 1800s. The Remick Place, including the stone foundation, was dismantled and rebuilt at a farm in New Hampton.  The house’s frame represented one of the last remaining examples of this type of construction.

William B. Wadsworth, or simply, “B”, as he was affectionately known, was a professor of electrical engineering who held patents for ear protectors and aided in the development of earphones.  He began acquiring land in Groton in the 1950s in remembrance of youthful summers spent at the nearby Cockermouth Camp and managed the land for timber.  He blazed extensive hiking trails on the property, including a trail to Bald Knob, where he installed an antenna stanchion high on Bald Hill -- a testament to his fondness for tennis and electronics.  He actually carried a battery powered 12 volt TV up the 1,900-ft peak so he could watch the Wimbledon Tennis championship broadcast on Boston television.

In 1991 William Wadsworth donated 1,002 acres of his property as part of his estate plan.  His primary objective in donating the property was to protect the land’s diverse wildlife habitat.  This land is valued for its large size, wildlife habitat, timber production, and recreational experience. 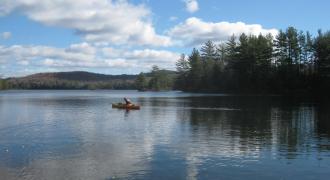 Grafton Pond is a 300+ acre lake with an almost entirely undeveloped shoreline. There are numerous bays and uninhabited islands to explore, offering excellent swimming, fishing, and wildlife-watching opportunities. 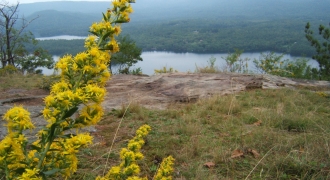 Eagle Cliff commands one of the finest views in the Squam Lakes Region. The view northwest to east-northeast encompasses most of Big Squam Lake and its many tiny islands, along with the formidable Squam Range looming above and behind.

There is a property sign, “Cockermouth Forest: John F. Woodhouse Trail” at the entrance. Follow a 300’ fairly passable road into a small parking area. Please don't block the gate when parking.

The Forest Society does not plow or guarantee access to this property or the parking area during the winter.  North Groton Road has “no parking” signs on the east side of the street. 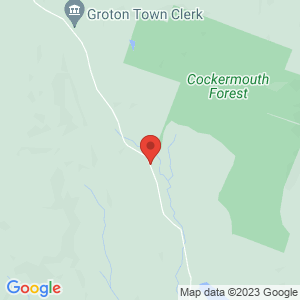