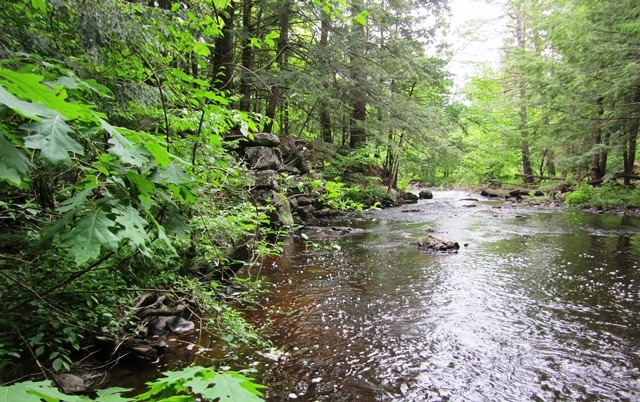 By conserving forested land along the Oyster River, the Powder Major's Farm and Forest project will preserve water quality and protect the health of Great Bay while providing accessible recreational opportunities. Photo by Brian Hotz.

MADBURY, DURHAM, LEE – Feb. 27, 2017 – Working with the towns of Madbury, Durham and Lee, along with hundreds of volunteers and donors, the Society for the Protection of N.H. Forests (Forest Society) bought a 192-acre property at the juncture of the three towns on Feb. 20 to create the Powder Major’s Farm and Forest, a recreation and conservation area that protects both natural and historical resources. 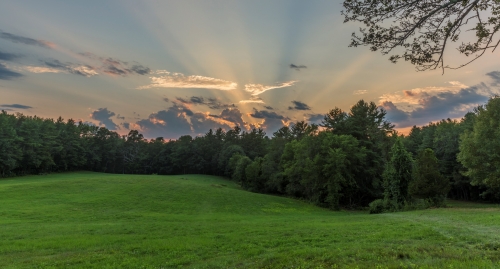 The Forest Society will manage the Powder Major’s Farm and Forest as a community resource, with an extensive trail system -- open to the public for recreation -- and frontage on the Oyster River that will preserve drinking water quality and the highest quality wildlife habitat of its kind in the state.

“This wonderful new reservation in Durham, Lee and Madbury is the result of a huge, community-wide effort of people in all three communities and funders who value natural resources and the quality of life they provide,” said Jane Difley, Forest Society president/forester. “It has been a 20-year goal for the Forest Society to conserve additional reservations in the Seacoast region, and this reservation will be among our most accessible in the area.”

The land is accessible off Route 155, behind Tibbetts Field in Madbury, as well as from Cherry Lane, where the Forest Society plans to create a trailhead and small parking area.

The new reservation’s name celebrates the land’s connection to local Revolutionary War heroics on the part of local patriots. In the late 1700s, the land belonged to Maj. John Demerritt, a Madbury resident who was called the “Powder Major” for his role in the historic raid of the British Fort William and Mary (now Fort Constitution) in Portsmouth Harbor. In 1774, a band of local patriots stole barrels of gunpowder from the fort, and Demerritt is credited for hiding some of the stolen barrels under his barn and then hauling it to the Continental Army at the Battle of Bunker Hill.

The Oyster River travels nearly a mile through the parcel, which is located within a Source Water Protection Area. The Oyster River is the drinking water source for the town of Durham and for the University of New Hampshire. The forest also overlies a major aquifer.

All three towns contributed funds to support the project and will hold conservation easements on the parts of the reservation that are within their boundaries.

The Town of Durham contributed $120,000 of conservation funds.  Robert Sullivan, chair of the Durham Conservation Commission, said that the location of the Powder Major forest, where the three towns meet, is symbolic of the cooperation among the three towns, which share a school district, mutual aid, sports leagues, water from the aquifer below the property and a common history. Water quality was tantamount, he said.

“I am always a bit thrown when traveling and people say, “Don’t drink the town water’,” he said. “In Oyster River, we strive to make sure that the best water comes right out of our faucets.  I think conserving the Powder Major land is a big step towards making clean water a reality now and for the future. For a $120,000 investment, Durham was able to help create a massive water filter system, a sprawling recreation area, and a place to escape to right next door.”

Voters in Madbury voted to provide $75,000 to the project, in addition to the donation of an easement valued at $175,000 on the abutting 60-acre parcel acquired previously by the town from the Schreiber family, members of whom were very interested in preserving water quality, according to Eric Fiegenbaum, chair of the Madbury Conservation Commission.
“The successful conservation of this land means that the community has shown that working together, the towns can protect valuable land and water resources and provide beautiful outdoor space for citizens to enjoy,” Fiegenbaum said. “Who knows how the trails may connect us together in the future?”

Voters in Lee also voted to support the project by contributing $150,000.

“The Forest Society’s leadership in acquiring this remarkable property will provide decades of excellent outdoor recreational activities for Madbury, Durham and Lee, and concurrently the protection of important wildlife habitat and riparian buffers to the Oyster River,” said Bill Humm, the chair of the Lee Conservation Commission.

Chuck Goss, one of three members of the Goss family who offered the land and easement for sale to the Forest Society, said his family has stewarded the Powder Major land for generations with a sense of responsibility to protect its historical and natural attributes.

“Our decision to conserve the property honors an agreement made between John and Jennie Demeritt and the Goss family nearly a century ago to preserve the memory of  Major John Demeritt, aka “The Powder Major,” Goss said.

“The land the Demeritt family farmed and logged for seven generations remains largely unchanged, and that has always been our goal,” he added. “We believe the enduring legacy of conserving this property lies not only in the New Hampshire history it preserves but also the water quality and ecosystems it protects, the recreational opportunities it provides and the scenic views it maintains for the benefit of current and future generations.”

Local volunteers, including students from the Oyster River High School Sustainability Club, helped raise awareness and funds in the community at several events, including a hiking series on the property, raffles, a community dinner and even a pie sale. Volunteers started a Save the Powder Major’s Forest Facebook page, posted flyers and held neighborhood meetings.

“I really feel that we did something good for all time, something that truly makes a difference,” said Barbara Lilly of Madbury, who coordinated many of the volunteer efforts. “I cannot express how happy I am with the outcome!”

Grants and donations from these organizations made the project possible: