More of Northern Pass to be Buried: In Quebec, Not New Hampshire 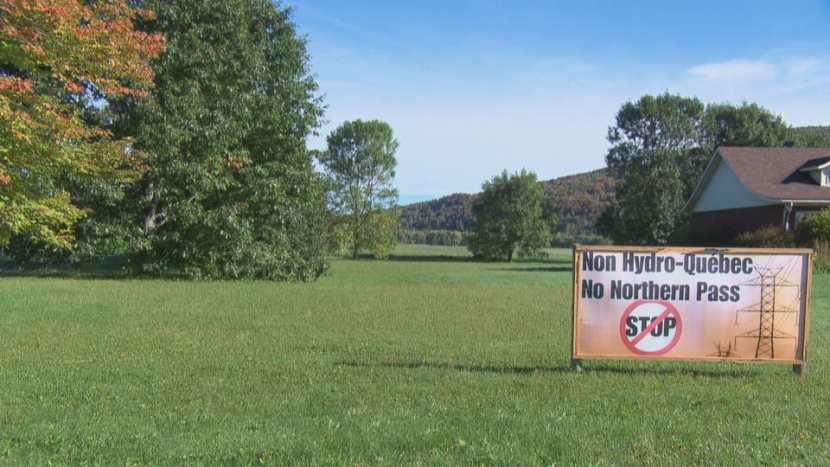 SOS Mont Hereford, which includes Nature Québec, the Regional Environmental Council of Estrie, Appalachian Corridor and the Network of Protected Natural Environments, described Tuesday as "great victory" the decision announced the day before by the State Corporation , which has submitted a proposal to this effect to the Couillard government.

This coalition believed that the route chosen by Hydro-Québec for the Northern Pass crossed "one of the last protected forest" in southern Quebec, located near the villages of East Hereford and Saint-Herménégilde, in Estrie.

The southern portion of the Québec-New Hampshire line, approximately 18 km long, constitutes the Quebec portion of the project. It was at the heart of a controversy since it must cross a forest protected area covering an area of ​​53 square km. "In the United States, the line will be buried (in the region of the White Mountains), unlike Quebec," said Nature Quebec's director, Christian Simard. This difference was shocking. Citizens do not like injustices so glaring. "

He felt that the crown corporation's decision was a "great victory" for the coalition - which was also supported by singer Richard Seguin, who resides in the region - who deserves credit for mobilized public opinion on this issue.

Although he would have preferred a scenario of circumvention of the protected area, Mr. Simard consoled himself by emphasizing that the burying of the lines will be along the forest roads, which, in his opinion, will minimize the impact. on the landscape."There are always impacts on the natural environment," he said. We must minimize them. We can do it thanks to the announced change. Even the circumvention would have had impacts. "

In May, Hydro-Québec rejected a scenario proposing that part of the transmission line be underground. At that time, the Crown corporation was favoring the air route, a less expensive option.

The Quebec portion of the Northern Pass project - which is scheduled to come on stream in 2019 - is valued at nearly $ 620 million, a bill that is expected to increase by approximately $ 60 million due to the change announced by Hydro-Québec.

"This is a transmission line that will be financed from export-generated revenues," said spokeswoman Lynn St-Laurent. We can make the change while ensuring that we respect our commitment that the rate increase for Quebecers will not be higher than inflation. "

Without going so far as to say that Hydro-Québec had folded because of the pressure exerted by the various groups, Ms. St-Laurent stated that the Crown corporation had "heard its partners" and decided to "take a step" in changing his tune.

She explained that the repeated requests surrounding the burying of the transmission line had triggered "a reflection" and that Hydro-Québec had decided to "join this scenario".

"We hear about this issue, but we can not do it everywhere," said Ms. St-Laurent.Elsewhere, there may be price implications. In this case, we have been able to take a step forward. "

In a report published in February, the Bureau of Public Hearings on the Environment (BAPE) recommended that Hydro-Québec re-evaluate in more detail the burial of the line in the southern portion before a possible authorization of the project by Quebec since "burial ... would, in particular, avoid the territory of the Hereford Community Forest".

In the United States, the Northern Pass reached a milestone last week, as US developer Eversource Energy obtained its presidential license. The US Forest Service is also expected to make a decision on the US proponent's request for a special permit to land in the White Mountains area.

The Northern Pass is one of the scenarios proposed by the crown corporation as part of a major tender in Massachusetts for a 20-year supply contract that could generate hundreds of millions of dollars. dollars in revenue.