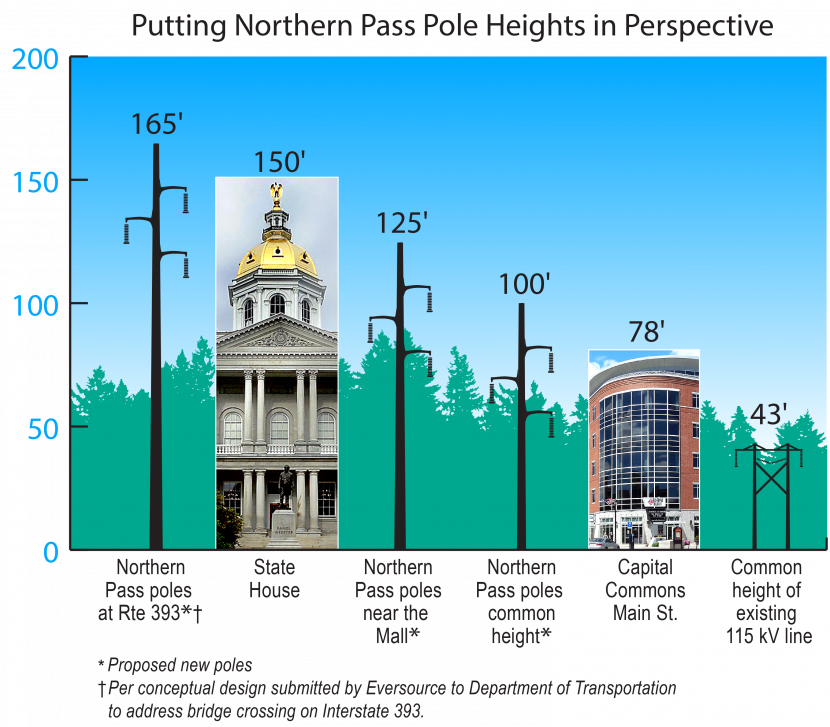 For more information about the City of Concord's response to the Northern Pass proposal, visit http://concordnh.gov/northernpass.

State hearings on the Northern Pass project have been going on for two and a half months now, but Concord hasn’t heard anything to change its opinion that the power lines should be buried as they travel through the city.

City officials might even be more adamant about burying lines because of a hike in proposed tower heights near Interstate 393, following Department of Transportation concerns.

“The city’s position is still that the line should be buried through the city. The city council has said that if Eversource is unwilling to bury it, the application should be denied as proposed,” said Danielle Pacik, deputy city attorney, representing Concord in the Site Evaluation Committee hearings.

The city added a Northern Pass-specific page, concordnh.gov/northernpass, to its official website this week. It urges city residents to contact the Site Evaluation Committee so they can comment in person at the next public hearings – at 49 Donovan St. in Concord on July 20 – or at future hearings.

The trial-like proceedings, with scores of witnesses each questioned by multiple sides, started April 13 and are expected to continue at least through August. They will determine whether the state approves the application from Eversource and HydroQuebec to build a 192-mile transmission line from Pittsburg to Deerfield.

While burying the power lines is the city’s preference, Pacik added, it’s possible that an alternative could meet its concerns about the line’s effect in Concord. “If Eversource is willing to come up with an alternative that has significantly less impact, the city would be willing to take a look at it,” she said.

Eversource has not changed its proposal for the project, which involves towers 100 feet tall or taller carrying 1,000 megawatts of hydroelectric power – almost the output of Seabrook Station nuclear plant – from Quebec into the New England grid. About 60 miles of the lines in the North Country would be buried.

Towers carrying the line over an I-393 bridge could be as tall as 160 feet because of concerns from the state Department of Transportation. The DOT wants enough clearance to use cranes on the bridge for possible construction. Similar concerns led Unitil to shift some power lines away from the bridge.

At 160 feet, those towers would be the tallest along the entire route and taller than the State House dome.

Click below read the full story by David Brooks in the Concord Monitor.