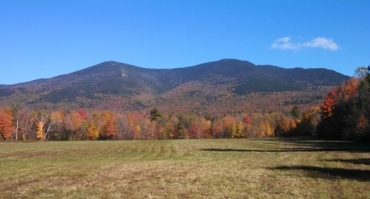 The Kinsman Ridge as seen from the Darvid Farm in Easton. Forest Society photo. 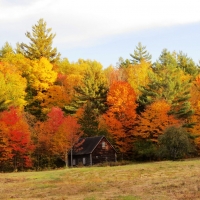 Drivers pull over to photograph this scene featuring one of the Darvid barns in the fall. Susan Schibanoff photo.
The Darvid farm is a familiar landmark in Easton.  Heading north on Route 116, you pass its fields after emerging from the dense forest gcover of the White Mountain National Forest. Many White Mountains hikers appreciate the beauty of the farm twice and from two perspectives ─ you can’t get to the Reel Brook Trailhead without passing the Darvid farm, and you can’t hike the Kinsman Ridge Trail without noticing the cleared fields in the valley below.Anna Darvid was born on the farm and still lives in the farmhouse. She knows the land and the memories it holds, memories of how it became the picturesque spot it is today. “My mother and father worked very hard, and it wasn’t always easy for anyone,” she said. 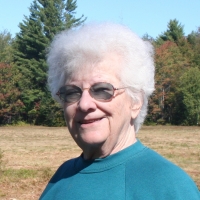 Anna’s father, Stanley Darvid, was born Steny Davidid and emigrated from Lithuania in 1908. Her mother, Agnes, emigrated from Poland in 1910. They met and married in New Hampshire, and in 1921 bought 150 acres of land in Easton to farm and raise a family on. Anna and her brother Tonie Darvid inherited the farm and are the last remaining Darvid children. They were predeceased by their brothers and sisters Sophie, John, Joe and Julia.

Anna is a modest and plain-speaking woman. Her tenure in this place bridged the Great Depression and the Great Recession. For 30 years she worked for New England Telephone. When they offered her an opportunity to relocate farther south, she had no interest in leaving Easton and decided instead that it was time to retire and stay on the farm.

Developers have approached her on several occasions with interest in buying the land. I imagine she could live handsomely on the proceeds of such a sale. Anna instead insists that this farm will always be a farm and she wants someone else to have an opportunity to farm it. From her perspective, two recent housing developments nearby are enough. She has noticed a trend of more road traffic and fewer songbird visitors. Last summer, Anna and Tonie donated a conservation easement on the family land to ensure that it will never be developed. For Anna and Tonie, this conservation easement is the legacy of the Darvid family and honors their parents and siblings. 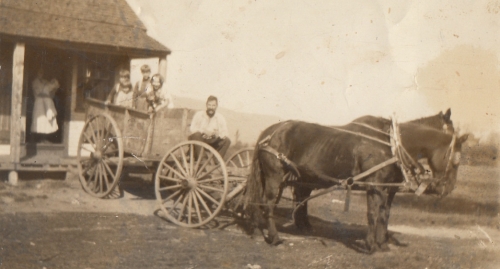 “Our parents put their hearts and souls into this farm,” Anna said. “After all their hard work here, I didn’t want houses to be built on this land.”

“The residents of Easton have long felt that the Darvid Farm exemplifies the incredible beauty of the Easton Valley, as well as the fortitude of its residents,” said Roy Stever, co-chair of the commission.

Anyone visiting the farm and walking the fields can appreciate Anna’s love for her family home. The farm is blessed with fertile soils and plenty of fresh water. Slide Brook and Reel Brook meander through the property.

Heading west along Reel Brook, where it flows between hayfields, will lead you to the back pasture on the western end of the property that abuts another conservation property owned and managed by Ruth Ward and Kris Pastoriza (In 2011, Ward and Pastoriza donated a conservation easement to the Forest Society on 361 acres of land). Looking east from the fields, you can see the expansive ridgeline of North and South Kinsman.

Off Reel Brook Road, at the foothills of the Kinsman mountains, is the Darvid woodlot. This 100-acre tract is a dense spruce-fir forest along the road.  As you enter the woodlot and start to climb toward the Kinsmans, the composition changes. The forest canopy opens into a colorful Northern hardwood forest filled with the sights and sounds of wildlife.

The Darvids have long used this lot for fire wood and for hunting squirrels. When times were lean, Stanley Darvid or one of the brothers would head into the woods and return with wild game for supper. Under the terms of the conservation easement, this section of property east of Reel Brook Road will be open to the public for foot travel.

The Darvids grew most of everything else they needed. They grew all sorts of vegetables and raised chickens, pigs and cows. The horses provided the farm power, alongside the children who all had a hand in the farm duties at some point in their lives. Still, Anna said the children always made time for fun. “The boys always went fishing, and we would all walk a mile down to Shingle Mill,” she explained. Shingle Mill is still the locals’ swimming hole, now known as Slippery Rock.

Anna said the hardest times that she remembers came during World War II. The economy was slow, and her parents didn’t have a lot of help because her three brothers were serving overseas. A neighbor boy too young to enlist helped Stanley Darvid with haying and other chores as his service on the Homefront. The farm did not have any machinery until they purchased a tractor with a mower in 1949, after the economy had recovered from the war.

When the economy improved, summer residents and visitors to the valley knew they could get staples at the Darvid Farm. If they had a surplus, the Darvids would sell eggs, milk, butter and potatoes. “People would come all the way from Littleton to buy potatoes. That was back when a bushel was 60 pounds, not 50, and a bushel only cost a dollar,” Anna said.

What remains of the farm life are mostly relics of a past era. The fields are not cultivated, but they are maintained by neighbors frequently enough to keep the brush out. The barns are full of tools and equipment that were once depended upon for the livelihood of eight people, but are used only occasionally now.

Nevertheless, some parts of the farm life continue. Anna grows potatoes and tomatoes, feeds the birds and watches the sun rise over Kinsman Ridge and set behind the Cooley-Cole ridge. At one of our kitchen table meetings, Anne told me that she doesn’t have any vices, “but I do yell at the squirrels when they steal food from the bird feeders.”

I asked Anna if she intended to revive the farm now that the conservation easement project is completed, and she laughed heartily. “The Darvid family’s days of farming this land are over,” she said. “But in a few years it may be another family’s turn to bring it back.”