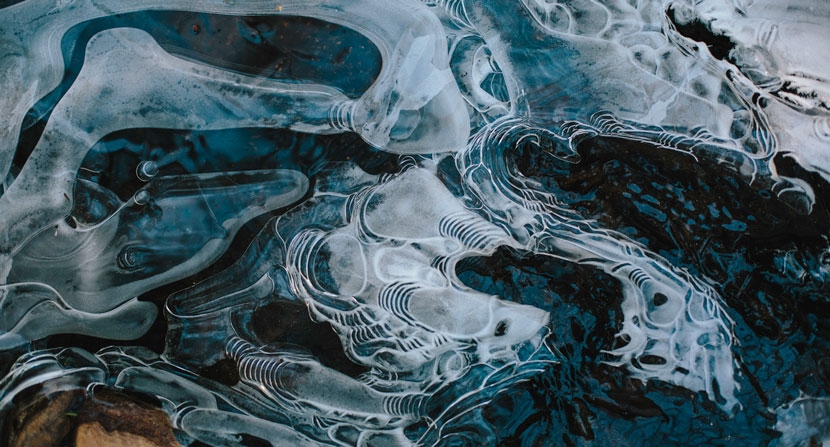 Flowing water forms ripples and bubbles as it freezes. Clear in some places, opaque in others. Emily Lord/Forest Society.

As I sit at my computer in a wool hat with a blanket on my lap, I’m forced to remind myself that winter isn’t official until Friday. Say what? I recall Jack Frost’s frequent visits as of late that make designs on my porch windows. My mind wanders to our depleting cord word supply. Trips outside require all the gear: warmers, face masks, mittens, and more. If not for the inescapable Christmas music, I’d easily forget it’s December and not February.

The lack of recent snow combined with freezing temps also reveal one of winter’s greatest works of art. Unencumbered by snow, our wetlands, ponds, lakes and streams provide a window into an icy underworld. 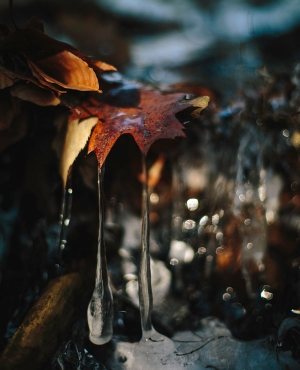 Dripping water formed interesting structures resembling the stalactites and stalagmites found in caves. Emily Lord/Forest Society.
I became fascinated by ice’s artistic flourishes on a recent walk with my dog. Instead of following our usual route, we took a detour along a wooded stream. I followed its undulating edges, mesmerized by its unique ice formations.

Water bubbled and lapped at the surface at a break in the ice. It tumbled down mini waterfalls, visibly flowing just beneath the surface. Sometimes I thought the water froze solid, only to discover it a little further downstream, flowing out from underneath opaque ice. Bonus: Keep reading this story to see a video of the icy stream at the bottom of the page.

I wondered why some ice formed clear and other ice appeared white or speckled. Our little stream looked like an amazing art gallery of ice’s many variations. Its creations included qualities like bubbles, icicles, spikey crystals, waves, ripples or wafer-thin sheets.

Even though water appears clear in its liquid state, there are many other sediments, flecks of minerals, dissolved gasses and air bubbles mixed in. For example, the eastern hemlocks along our wooded stream provide shade and cool the water during the warmer months, helping to maintain healthy levels of dissolved oxygen that much aquatic life need to survive. 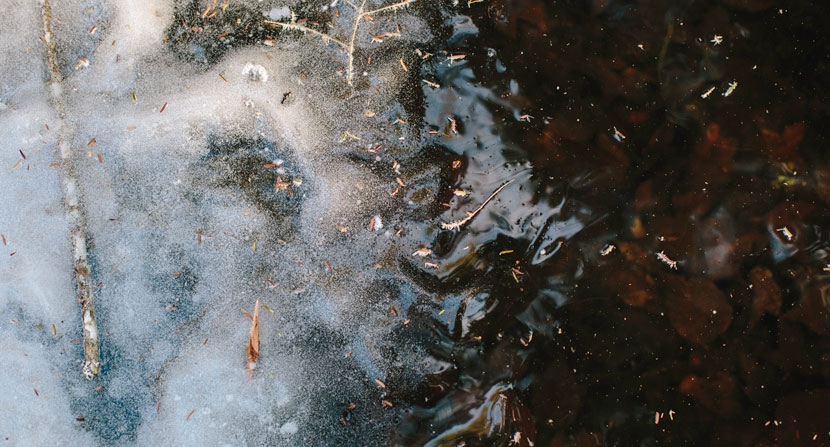 The transition between cloudy and clear ice also looks like a battle between light and dark. Emily Lord/Forest Society.

The particles and air bubbles can become concentrated when water freezes and these extra clusters of stuff interfere with the light. When certain frequencies of visible light scatter, we’re left with ice that appears white and cloudy. It’s why ice usually freezes cloudy rather than clear.

Amazed to find so much clear ice seemingly free of air bubbles and other debris, I relished seeing my feet seemingly float on top of these solid sections. One of my favorite sights were leaves that froze in such a way that looked like they were perfectly encased in glass. 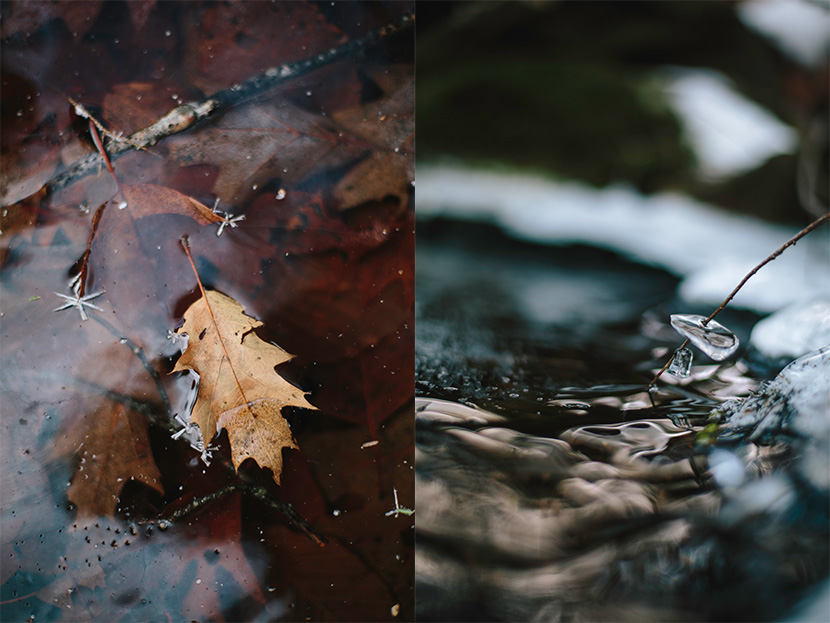 I almost described this ice as crystal clear, a common phrase meaning something is completely transparent and unclouded. All ice is made of crystals, though, even cloudy ice. Apparently, it matters how the crystals form.

When water freezes rapidly, many small crystals form, making the ice look whiter because crystals are reflective of light. The opposite is true when ice freezes slowly. It forms fewer and larger crystals, which make it look more transparent.

I saw the clearest ice free from imperfections toward the center of the stream or frozen pools. At the edges, the water is shallow and more likely to freeze quickly or endure cycles of freezing and thawing.

My enjoyment of this wintertime phenomena seemingly hasn’t changed since I was a kid. The thin sheets of cloudy ice were the most familiar, providing that satisfying crunch with every step. A newfound joy came from watching my dog slide clumsily across the clear ice in the center of the stream and its occasional frozen pools.

Next time you go for a walk, see if you can spot Mother Nature’s brush strokes in the form of ice crystals. Keep your eyes peeled for both cloudy and clear ice. Notice where they transition. This window might be short, and this free art show may soon be covered under a blanket of uniform white.

Emily Lord manages the Society for the Protection of New Hampshire Forests’ online and social media presence. Forest Journal runs every other week in the New Hampshire Sunday News. Reach Emily at elord@forestsociety.org or on Instagram/Facebook @forestsociety.