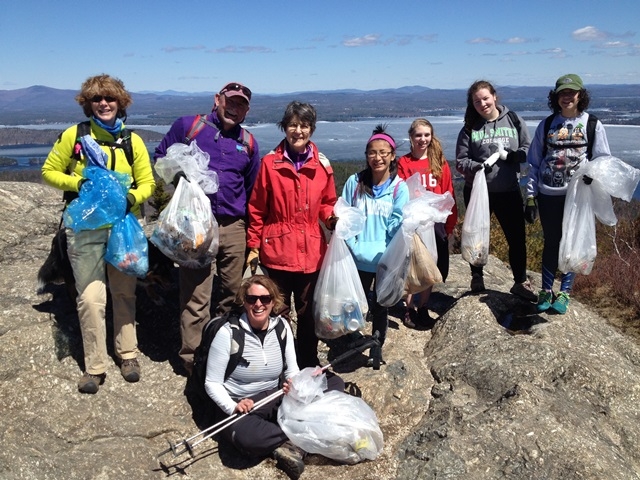 You’d think a group of high school girls would have only disparaging remarks about litterbugs after picking up scads of sticky granola bar wrappers and Gatorade bottles – plus some really weird items -- from the summit and trails of Mt. Major last weekend. But that wasn’t the case with members of the Prospect Mountain High School’s Environmental Club.

The students cleaned up the trails with two teachers, Forest Society staff members and two journalists covering the effort, organized in honor of Earth Day. When asked why they thought people left trash behind on this popular and beloved mountain, they were surprisingly magnanimous. They figured that hikers, of all people, care about the resource, so most of the litter was most likely accidental. Wrappers and bottles were probably inadvertently left behind after rest breaks or summit lunches, they surmised.

“A lot of it (litter) was in the bushes, so you could tell it blew away while they were eating,” said Hannah Gagnon.

Jenica Locke agreed that most people don’t intend to detract from such a special place. “People say, ‘It’s only one’,” she said. “But it’s not only one.” 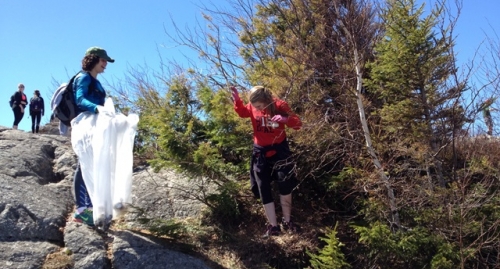 Students Jenica Locke and Hannah Gagnon brave the summit brush to remove litter.
Not all of the litter fell neatly into the oversight category, though. The striped underwear, for example, defied explanation. “There were more weird things than I thought there would be,” said Madison Morton.  That list included a lost “Alex and Ani” bracelet and even a vintage pink Tab soda can, probably sitting there since the ‘80s.

Strange finds aside, there’s something very hopeful about these young women’s willingness to give litterers the benefit of the doubt. Their generosity made me feel rather cynical. I live on a dirt road that happens to be a shortcut to the dump, so sometimes people escape having to pay a few bucks to the town by tossing tires or the occasional chair or TV over the side and into the brook. Are these people -- not litter bugs but litter thugs – different from the people who leave trash on mountains? The teen volunteers I met last week seemed to think so, and I would like to think so, too. Doing so forwards the belief that most people want to do the right thing when it comes to caring for planet Earth, that education and encouraging good stewardship will bring about positive change. Most of us don’t want to pollute or cause harm… we’re just ignorant of the consequences of our lifestyles and how we can do better.

When extrapolated out to environmental issues with more at stake than littering, that’s a pretty hopeful outlook.

I heard and saw other reasons to feel hopeful on this workday. As our group scoured the summit for trash, other hikers chipped in, bringing litter over to add to our collection. I overheard one dad telling his son, “Sure, you can go around and pick up litter, too!” (I guess it looked like fun!) As we carried our garbage bags down the mountain on the Boulder Loop Trail, fellow hikers offered sincere thanks, and it was obvious that they cared about this place, too.

We ran into a group from the Belknap Range Trail Tenders building cairns to mark the trails, all volunteers giving of their time to improve the hiking experience.

And teacher Sarah Thorne, the advisor of the Prospect Mountain High School Environmental Club, noted another positive. The best part of the workday for her was to see the students – two of whom had never hiked Mt. Major before and one of whom had never hiked any mountain before -- enjoying being in a beautiful place and making a contribution to it. “It was great just seeing their delight,” she said. “It’s experiences like this that keep people coming back and that turn them into long-term hikers.”

Long-term hikers who will, I believe, always leave mountains as good as or better than how they found them.