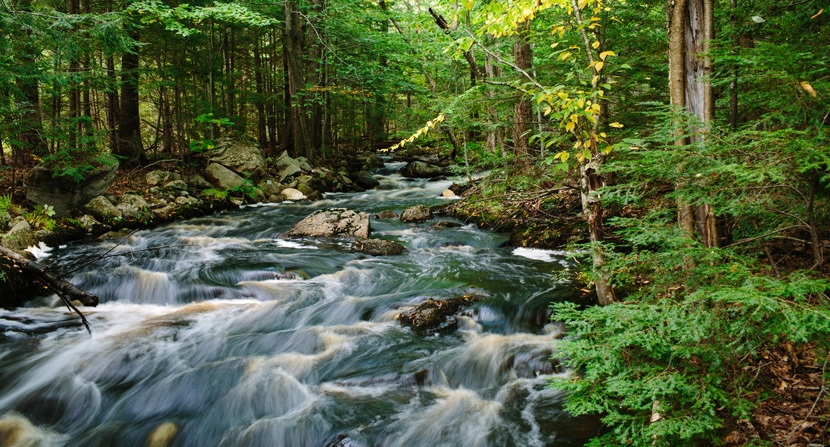 This stream is part of the Merrimack River watershed on land owned by Manchester Water Works and feeds Tower Hill Pond, which in turn feeds Lake Massabesic, providing drinking water. The forested buffer along the stream is a natural filter. Emily Lord/Forest Society Photo.

“The farmhouse lingers, though averse to square
With the new city street it has to wear
A number in. But what about the brook
That held the house as in an elbow-crook?”

--from “A Brook in the City” by Robert Frost

I came across this Robert Frost poem, A Brook in the City, written nearly 100 years ago in 1920. He penned it in a time of increasing awareness that industry and urban development in New England were overwhelming the natural world. Frost laments the imbalance, and writes in the poem that as the city grew up around that farmhouse,

“The brook was thrown
Deep in a sewer dungeon under stone
In fetid darkness still to live and run --
And all for nothing it had ever done
Except forget to go in fear perhaps.
No one would know except for ancient maps
That such a brook ran water…”

Frost’s vision of a brook overlooked caught my attention because some of us at the Forest Society have been spending a fair amount of time on and around the Merrimack River this summer and last. Like Frost’s brook in the city, the Merrimack for some—perhaps for most—is similarly forgotten. We’re working with videographer Jerry Monkman on a documentary film about the river and its watershed, the health of which will be critical to our future livelihood. 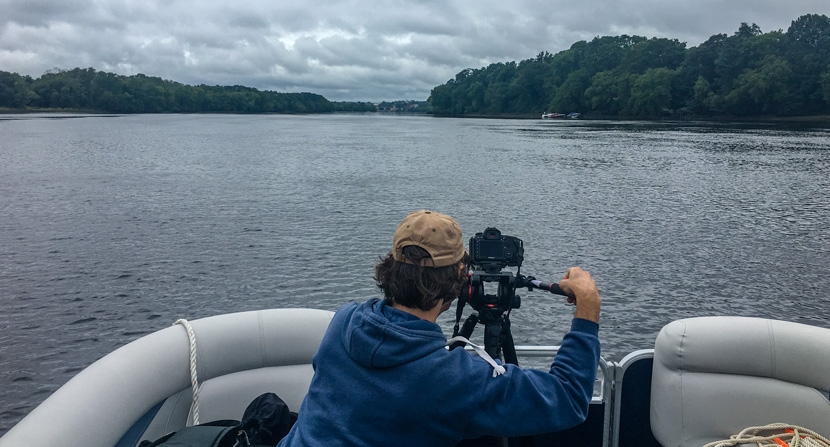 Videographer Jerry Monkman focuses in on a section of the lower Merrimack between Newburyport and Haverhill, Mass. The river travels 75 miles to get from Hooksett to the sea. Jack Savage/Forest Society Photo.

Once a transportation corridor itself, the Merrimack has been usurped by highways that flank its banks. Sequestered in our climate-controlled cars and trucks, we whiz along from Franklin to Concord to Manchester to Nashua, criss-crossing a nearly invisible body of water below. Do we remember from where it flows? Do we know where all that water goes?

The river’s edge is even more developed—and arguably more invisible—once it bends East to help define our border with Massachusetts. Lowell and Lawrence and Haverhill crowd its banks, where it is entwined by I-495 like Bittersweet around an oak. It spills into the Gulf of Maine in Newburyport. The infamous four million Hooksett disks traveled that river route in 2011, and are still being found washed up on Maine shores.

While the river may no longer power the textile mills that drove the urban development of the 19th and early 20th centuries, it is still prominent in our economy. More than half a million households and businesses rely on it for drinking water. More cities and towns are planning for the time when they, too, will need to stick a straw into the river. We still generate power thanks to the river, and the river powers a recreation economy. 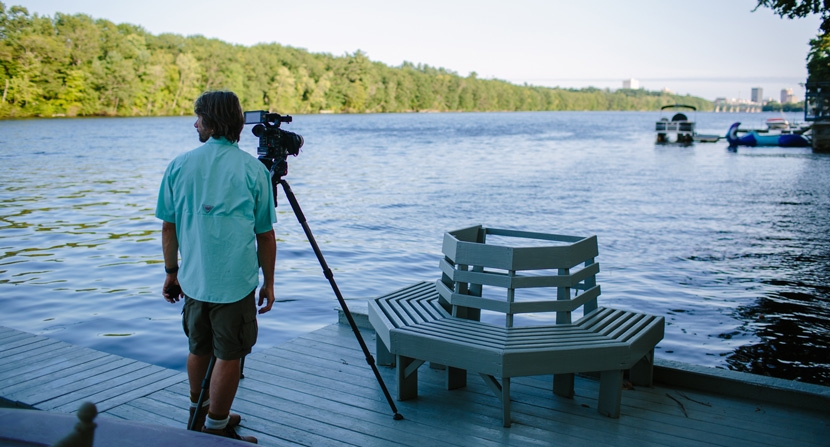 Capturing video of the Merrimack with the Manchester skyline in the distance. Today a trip along the Merrimack features stark contrasts between urban, suburban and still rural landscapes. Emily Lord/Forest Society Photo.

However, both the US Forest Service and American Rivers have listed the Merrimack among the top most threatened rivers in the US, in large part because of the predicted pace of development in the watershed. The forested buffer along the river and its tributaries is the natural filter and sponge for water; the more we convert to pavement, the less healthy the river becomes.

The Merrimack has been a focus area for the Forest Society since our beginning in 1901.

Our first advocacy goal was the passage of the Weeks Act, which enabled the establishment of eastern National Forests. The Weeks Act cited protecting the “Navigability of navigable streams”—i.e. the Merrimack—as the source of Congress’s authority to acquire lands to protect a watershed. The Weeks Act passed, the White Mountain National Forest (the upper reaches of the Merrimack River watershed) was established, because business and conservation interests came together in recognition that we had common interest in protecting a natural resource.

We made a lot of progress improving the water quality of the Merrimack since then. Today it is fishable and swimmable—and I can attest that in many stretches, it is remarkably beautiful. To keep it that way, for business and pleasure, we will need to heed Robert Frost. 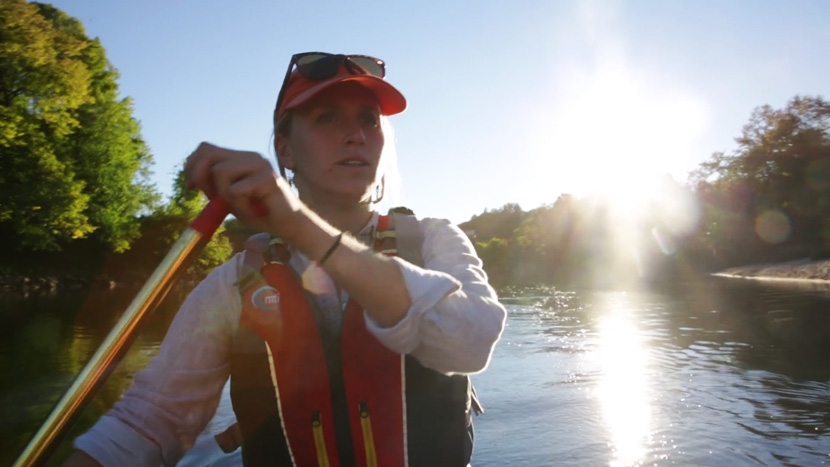 The Merrimack: River at Risk

See the trailer for the in-progress documentary, "The Merrimack: River at Risk."