The Mushrooming Internet of Trees 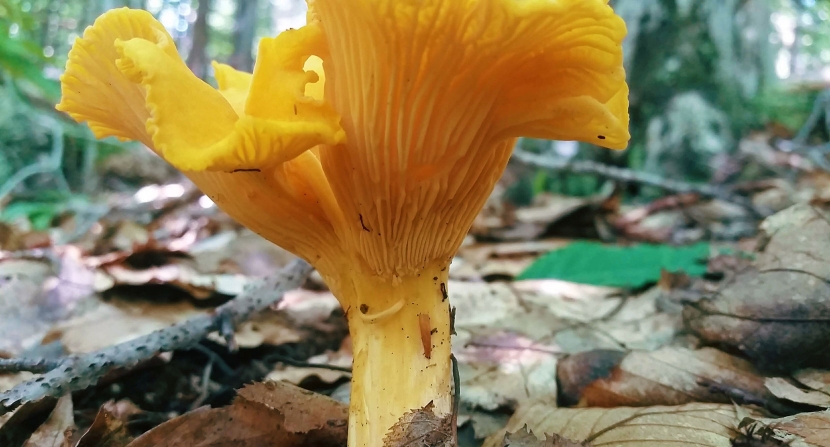 Thanks to the wet weather, mushrooms are sprouting in all their surprisingly colorful glory.

Often when we humans head for a day in the woods, it is to free ourselves from the demands of our increasingly interconnected world. Step far enough into the wild and our “smart” phones no longer bring us the latest desperately important updates on Facebook or Instagram. Go further still and we can no longer send or receive texts. We are apart from our network. Some of us seek that solitude, others abhor it.

But even when we are deep in the woods and beyond the reach of tweets and likes and IMs, we are standing on a vast “wood-wide-web” of interconnectedness. The internet of trees is humming. 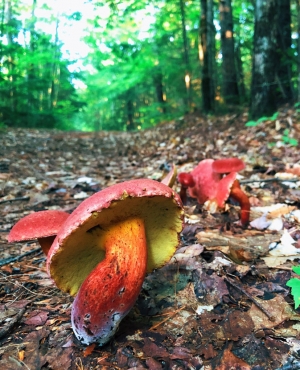 Photo by Emily Lord
Thanks to the weather of late, you can see the signs of that underground network popping up. New Hampshire’s woods are brimming with mushrooms, which are the fruiting body of a far larger fungus that is a network of thread-like strands called the mycelium.

Mushrooms are different from other plants in that they are without chlorophyll and thus can’t photosynthesize, or use the sun to generate sugars from water and carbon dioxide in the air. No sun-to-soup for you!  Instead they survive through other strategies, including symbiosis and saprophytism.

With symbiosis, mushrooms on the forest floor are linked through mycorrhizal networks, in which the tiny root ends of a tree and the microscopic filaments of the fungus of the exchange nutrients. The tree trades sugar compounds it can make through photosynthesis for help getting minerals and water from the soil. No word on whether tariffs threaten the balance of that subterranean trade. 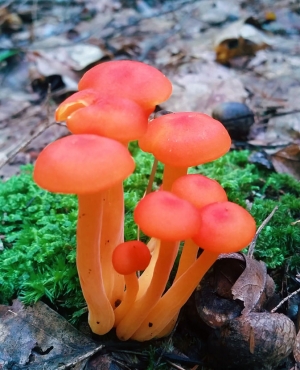 Photo by Gabe Roxby
Saprophytism is a ten-dollar word that means the fungus helps decompose organic matter in a way that makes it easier for trees to take up those nutrients. Fungi are particularly adept at breaking down tough organic materials like cellulose and lignin, which are key elements of wood. (So in a forest, there’s lots of it.) Good work, fungus, says the tree, let me buy you a beer—or at least a take a sip of my simple sugars.

Those studying this relationship between mushrooms and trees are coming up with some remarkable discoveries. There is growing evidence that those same networks—the trade route between trees and fungi—allow trees to communicate with each other about drought, insect attacks or disease.

Scientists studying this phenomenon have demonstrated that trees receiving these messages of impending stress then alter their own behavior to better defend themselves. It’s kind of like a driver using Waze, upon learning of a police car running radar ahead, then slowing down to avoid a speeding ticket. 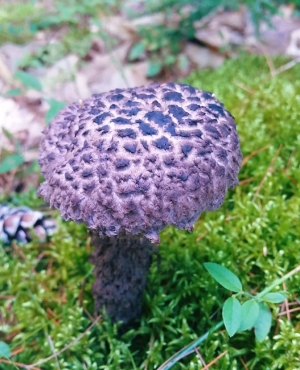 Photo by Gabe Roxby
Researchers like Peter Wohlleban (The Hidden Life of Trees: What they Feel, How They Communicate) and Susanne Simard of British Columbia go perhaps a step further, concluding that trees use the communications network to support each other, sharing carbon and “loaning” sugars between tree species, such as between conifers (fir) and deciduous trees (birch).

This is a radical notion for those who think of trees fighting for their own best interests, a survival of the fittest model. Foresters, for example, when marking for a harvest, often think in terms of leaving behind strong seed trees to propagate the next generation. The conceptual difference in models could be enough to spark an endless political debate about the role of government.

Instead of that, how about a walk in the woods? And while you’re there enjoy the colorful array of mushrooms, take in the trees above them, and know that Facebook founder Mark Zuckerberg is at least as smart as a fungus.