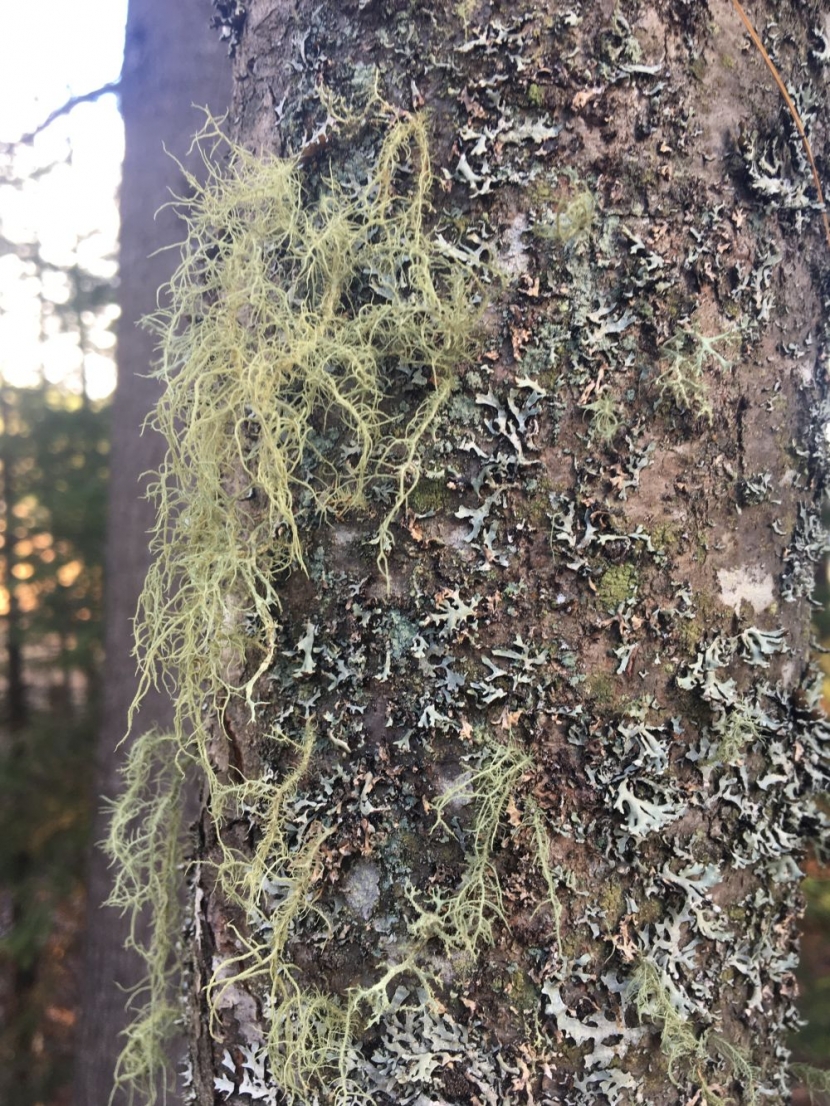 It’s officially stick season, and while there may be less green in the woods at this time of year, that can sometimes be a good thing.  Late fall and winter is a time when I tend to notice different things in the forest, things that have always been there, but now they jump out at me without the distraction of verdant green foliage and a lush herbaceous understory.

One bit of color that really pops at this time of year is epiphytic growth on tree bark.  “Huh?” you say.  Epiphytes are organisms that grow on other organisms (I had to look this up myself when my son had “epiphyte” as a spelling word in second grade- his teacher apparently had very high expectations that year) so the epiphytic growth I’m talking about is just that crusty or leafy looking greenish stuff you see growing on the trunks of trees.  Most of it is mosses and lichens, but you should probably get out your hand lens and grab a notebook, because all of it is fascinating. 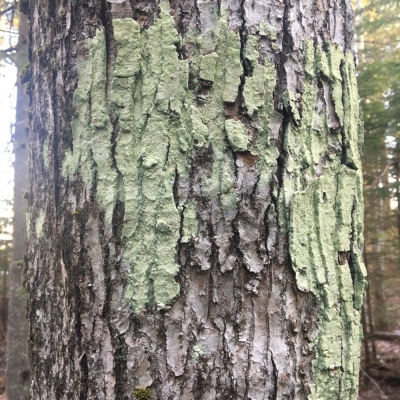 Mosses are actually very tiny plants.  Through a magnifying glass, you can clearly see individual leaves arranged on stalks, like miniscule houseplants densely bunched together to form what might look like a fuzzy mat from a foot away.  More common on tree bark than mosses, and far weirder, are lichens. Epiphytic lichens come in numerous growth forms, so it can be confusing to tell what you’re looking at.  Some are vaguely leafy looking (foliose lichens) while others are just kind of low and crusty (crustose lichens).  Still others look like hair or fine filaments (fruticose lichens).  None of these lichens are plants, although they may appear green and leaf-like. 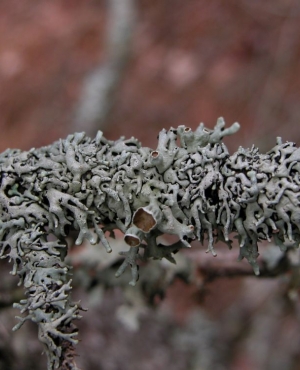 Lichens consist of a green algae and/or a cyanobacteria living inside of a fungus in a symbiotic and (usually) mutually beneficial relationship.  The alga photosynthesizes, similar to a plant, and makes sugars to fuel the lichen’s growth, while the fungus provides housing of a sort, that protects the organism from unfavorable environmental conditions.  If you want to know what a lichen looks like under a microscope, says ecologist Dr. Natalie Cleavitt, who studies lichen ecology, “picture a fungal hyphal spaghetti with green algal meatballs.”  Sometimes the organisms that make up lichens can also exist independently in nature, a situation which complicates lichen taxonomy considerably.  Science currently classifies lichens according to their fungal components, so all lichens are technically in the Kingdom Fungi.

Lichens typically don’t get nutrients directly from what they’re growing on, just a substrate on which to attach themselves.  It may seem that some lichens prefer the bark of oak trees, for example, while others are more often found on maple or hemlock, but Dr. Cleavitt explains that this has more to do with microclimate and water availability than tree species per se.  “Does a certain bark stay wet longer than another when it rains? Or have deeper cracks that hold moisture?” she says, “these could be reasons why a certain lichen is found on one type of tree and not another.”

Lichens are really good at the long game.  They grow extremely slowly, can live hundreds of years, and can survive droughts and complete desiccation for long periods of time thanks to their fungal housing.  Experiments have shown that lichens can survive in the vacuum of space for 15 days with no loss of photosynthetic capacity, and in conditions simulating the atmosphere on Mars.  They’re clearly super organisms, but like any good superhero, they also have a kryptonite: air pollution. 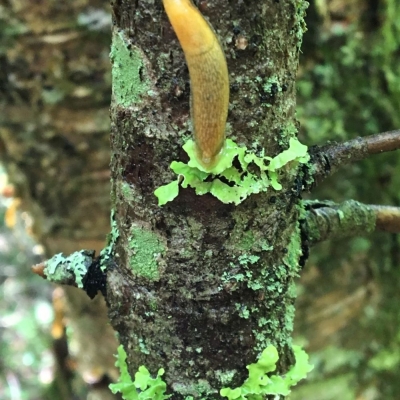 Because lichens don’t have any kind of root system, they obtain their water and nutrients directly from the air.  This means that pollutants in the air are absorbed across the entire surface of the organism and can bioaccumulate quickly.  In addition, the cyanobacteria component of some lichens can only fix nitrogen within a narrow pH range. The pH of rain and tree bark has been greatly affected by industrial air pollutants- nitrogen oxides and sulfur dioxide emissions- in the latter half of the 20th century.  We know from historical records that we’ve already lost many of the cyanolichens native to New England; others are now quite rare.  Lichens with a high surface area to volume ratio, such as those hair-like “fruticose” lichens that often hang in the tree canopy, are also susceptible to bioaccumulation of contaminants that can lead to mortality.  In this sense, lichens are akin to the canary in the coal mine.  “It’s one drawback of being an association of several different kinds of organism,” says Cleavitt.  “If one of the components is compromised, the whole thing falls apart.”

Besides being sensitive indicators to changes in air quality, lichens also serve other important functions in the environment. They are amazing pioneer species and are often some of the first organisms to colonize disturbed areas following a natural disaster, stabilizing soil and capturing moisture that can render these environments more hospitable to plants and other living creatures.  Remember that plate of green algae meatballs and fungal spaghetti?  Sounds delicious, but we don’t even need to convince Sam I Am to try it for evidence that lichens are edible and quite nutritious.  Cleavitt has recently published a paper on slug and snail consumption of lichens, and she notes that white-tailed deer will also eat epiphytic lichens in winter.  Foliose and fruticose lichens provide excellent habitat for insects and other small invertebrates and are also a preferred nest building material for two of the cutest animals you’ll find in our state: ruby-throated hummingbirds and northern flying squirrels.

To me, it’s just awesome to know that something as weird as epiphytic lichens exist in nature, and even better, in my own backyard.  It just takes a little less green for me to notice them again each year.