Feeding birds connects me to larger questions and brings wildlife right to the window in winter.
Dave Anderson
Birdwatching
Education 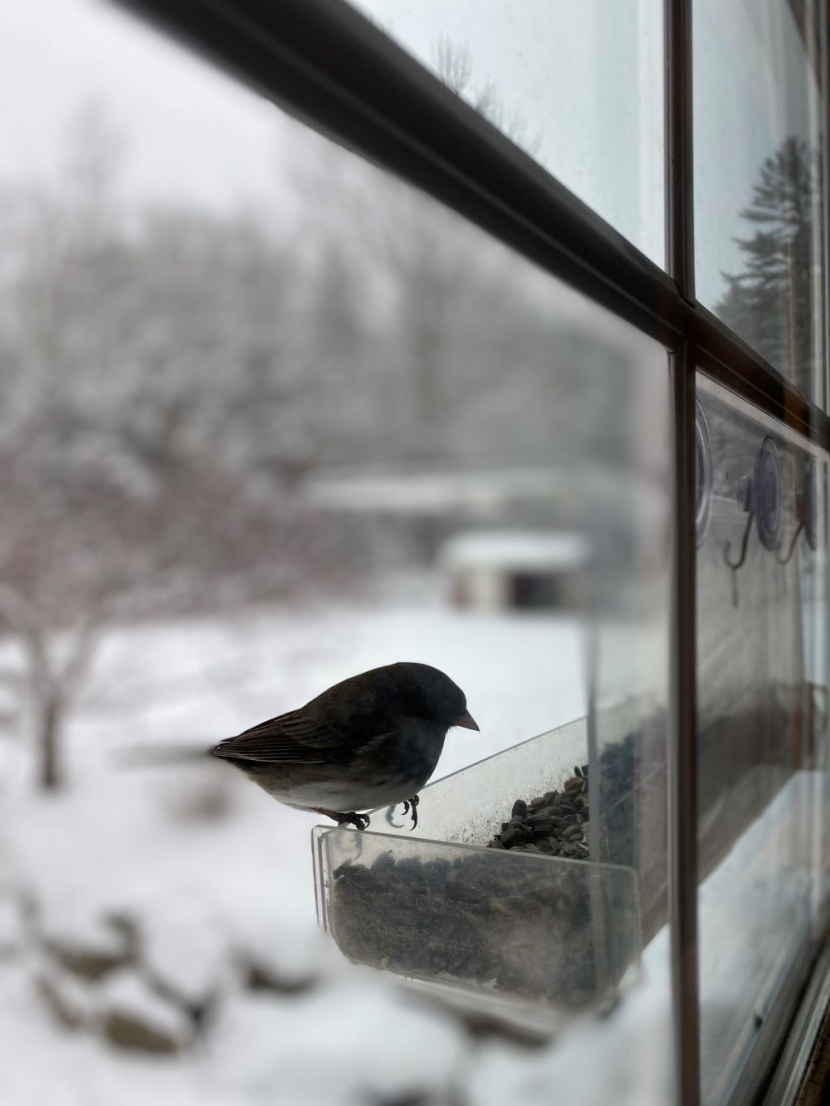 Hope Is The Thing With Feathers - Emily Dickinson

Birds are indeed little emissaries of hope — this is particularly true in winter when the sun won’t shine. Yet birds arrive faithfully bringing news from realms beyond human endeavors. I enjoy walking from window to window with a cup of coffee at sunrise to watch the arrival of familiar feeder birds. Despite bitter arctic temperatures and potential for snowstorms in January, a subtle increase in sunlight triggers a response by songbirds: early morning tweets and twitters are on the uptick with fragments of spring songs audible before February. It has already begun.

Bird feeding is also therapy: mental wellness. Watching wild birds delivers animation, color and anticipation of springtime. Hardy resident songbirds and drumming woodpeckers telegraph faith in what lies ahead. The most common birds at backyard feeders are most successful: they have adapted to life in the woods or suburbs during the lean months of the year. Each species has unique family traits or peculiar habits and feeding preferences.

My “Top Ten” list for the most common birds at our sunflower seed and suet feeders are consistent from winter to winter.

The daily list in order of decreasing frequency includes Dark-eyed Junco, Black Capped Chickadee, Tufted Titmouse and White-Breasted Nuthatch. These four species in shades of black, white or gray are the most common and consistent. The next two species are less predictable: Red-Breasted Nuthatch and American Goldfinch. Two larger, more colorful visitors are Blue Jay and Cardinal. The Top Ten list is complete with two woodpeckers: smaller Downy Woodpecker (size of a Titmouse) and larger, Hairy Woodpecker (size of a Blue Jay). 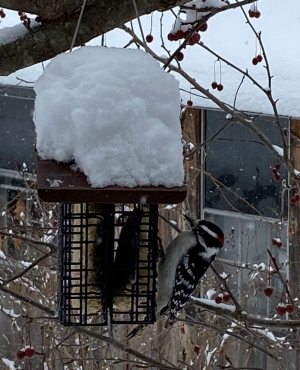 The total birdfeeder list this winter is roughly 16 species. The next three in decreasing order of frequency are common yet irregular feeder visitors: Red-Bellied Woodpecker, Mourning Dove and Bluebird. Three relative rarities this winter so far are Carolina Wren, a lingering pair of Song Sparrows and a recent flock of sleek Cedar Waxwings to round out the list of 16 species visiting since December. Technically, I should also add Wild Turkeys as they are occasional visitors, marching out of surrounding woods to clean-up spilled seed beneath feeders.

What I have NOT seen this winter are the wide-wandering migrants including Pine Siskin, Evening Grosbeak, Purple Finch, Common Redpoll and a specialized conifer cone specialist, the Red-Winged Crossbill.

The annual winter finch forecast (yes there IS such a thing) predicted we would not see Canadians visitors due to ample availability of Pine, Spruce and Balsam Fir cone seeds and strong crops of tiny seeds of aspen, birch and alder that fuel these birds’ wide winter wandering as “facultative migrants.”

In birding terms, this winter is NOT an “irruptive species” year in New England to expect to see northern finches due to strong seed crops across eastern and central Canada and northern Great Lakes States.

Until recently, we didn’t host any fruit-eating birds, “frugivores” that dine on dried crabapples or fruits of wetland shrubs such as wild raisin or winterberry holly. During mild winters, over- wintering Robins and Cedar Waxwings stay in NH wherever fruit remains available on trees, particularly in the warmer SE and Seacoast regions. This past week, a first flock of Cedar Waxwings arrived with our local flock of Bluebirds before the cold snap. Birds sense severe weather. The waxwings sampled the crabapple supply only briefly.  We have enjoyed a small flock of bluebirds this winter. More dedicated homeowners maintain tray feeders of mealworms specifically for Bluebirds. Here, the local Bluebirds feasted on ornamental lavender-colored fruits of a Japonica shrub — the color combination of blue against purple was spectacular. 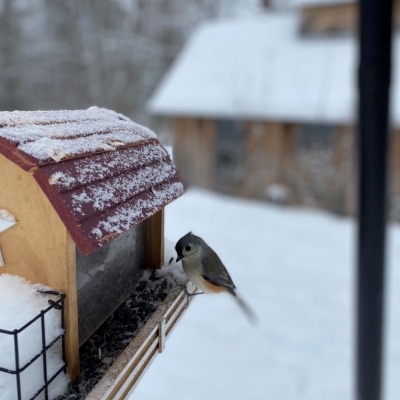 Tufted Titmouse at the tray feeder.

Changes in local habitats – farms and forests vs. suburbs and cities also plays a role in winter bird diversity. I’m curious if winter bird ranges are expanding north during the warmer winters of recent years.

For example: is the arrival of Carolina Wren and Red-bellied Woodpecker a response to milder winters? The annual Audubon Christmas bird count data 20 years ago did not report Red-bellied Woodpeckers in NH. I asked Chris Martin, Conservation Biologist at NH Audubon about range expansions. He replied it makes more sense to look at permanent, year-round residents rather than migratory birds:

“Examples depend to some extent on where in the state you are focusing. For example, up north in Pittsburg and Errol, Christmas Bird Counts have only begun to find Wild Turkey flocks (hens w/ young) in the last 15 years. Also up north, there are examples of ‘surprise’ new residents include wintering Red-bellied Woodpeckers and Tufted Titmouse in just the last ten years.

"A mid-state bird that has swelled in numbers overwintering thanks to milder conditions is the Carolina Wren, a vocal species folks might readily recognize by call.” Martin adds “as more temperate vegetation moves in, it can create conditions that will host more Appalachian species. At least one pair of Red-headed Woodpeckers have been breeding in central NH in the last few years, that’s new. Black Vultures (southern species) are appearing with greater frequency. On the other hand, Merlins and Ravens (northern species) have both been expanding south — so go figure!”

"Get out of here you dang squirrels!"

Lastly — shaking my fist — Gray squirrels at feeders put a dent in the sunflower seed supply. They can’t reach a high tray feeder attached to outside of a window — but I can tell they’re thinking about it. Squirrels arrive to hang and swing inverted from feeders during mid-day when temperatures are typically warmest. Language to describe them isn’t appropriate for a family-friendly feature. At least the juncos gather what the gray squirrels spill. 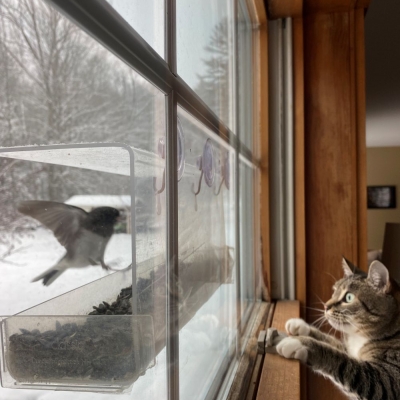 Dave Anderson is the senior director of education for the Forest Society.