Artist behind The Blue Trees sparks a conversation about art, oxygen and a love of trees.
Dave Anderson
Merrimack Valley
Education 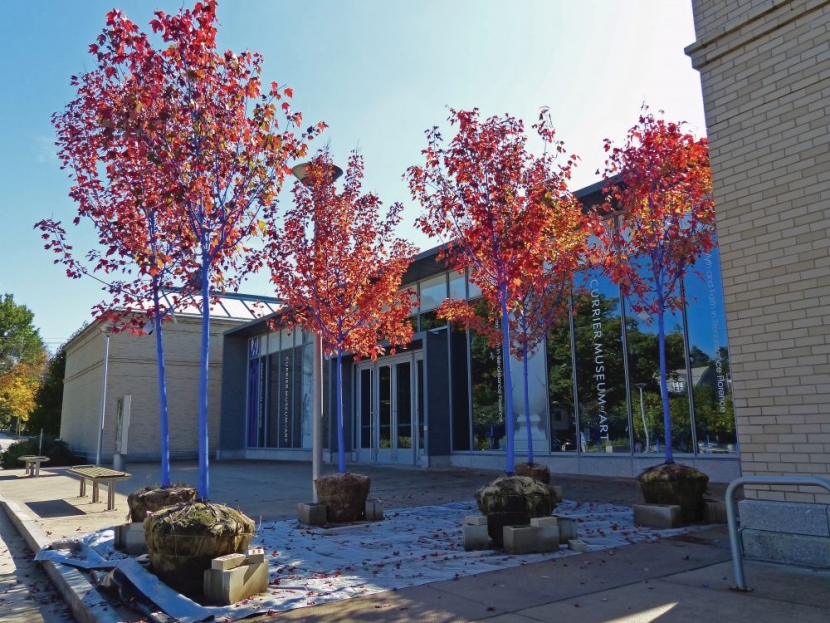 "We work so hard to create color, but nature does it effortlessly!” (Photo by Alana Johanson, Currier Museum)

Konstantin Dimopoulos is the artist behind “The Blue Trees” now on display at the Currier Museum of Art and Victory and Pulaski Parks in Manchester. Tree trunks sporting a vibrant - almost neon - shade of blue were colored by the artist working with volunteers including community groups, families and children during a September 30th Family Fun Day held at The Currier Museum.

Dimopoulos is a commercial artist, a sculptor originally from New Zealand. His kind and dynamic business partner, wife, Adele calls him “Kon.” Others are quick to follow. The couple had lived in Australia before moving to the US and Canada where they travelled extensively while working to raise awareness about the plight of global forests. 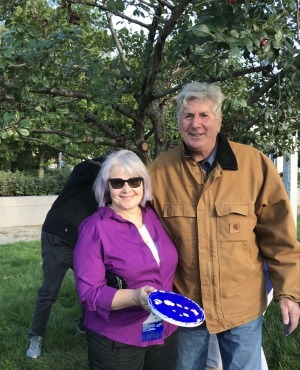 Manchester is the twenty-fifth city internationally to host the installation of The Blue Trees - a total of 75 different sites including 12 schools. Kon rattles off a travelogue of places where he and Adele installed vibrant blue tree art: Denver, Virginia, Chattanooga, Chicago, Palo Alto and Sacramento California, Brecken Ridge Colorado…”  At present they live in Brooklyn, NYC after having moved north from Chattanooga.

The most common first reaction is about the environmental safety of coloring the trunks and largest limbs of living trees blue. Their biodegradable dye is a water-based chalky formula similar to athletic field marking paint that breaks down over a period of 4 to 6 months and washes away without leaving a chemical residual.

Invariably the next question is “Why?” That question lies at the heart of Dimopoulos’s intent for The Blue Trees. Kon understands and welcomes people’s concern for the health and wellbeing of the trees – in fact, that’s the entire point!

We got to this stage in 2003 when I was just starting out – things were getting crazy – people were painting seal pups to save them from fur trapping. Other people were painting rhinoceros horns or elephant tusks bright pink… You almost had to do something crazy. What is more crazy: a guy painting trees blue or a society willing to tolerate removal of entire forests via slash and burn for agriculture and repeating the process across vast areas of the Amazon and Asia? When you learn about the ‘Eco-cide’ of removing an area of forest the size of Belgium each year worldwide, you can’t afford to be subtle anymore.” 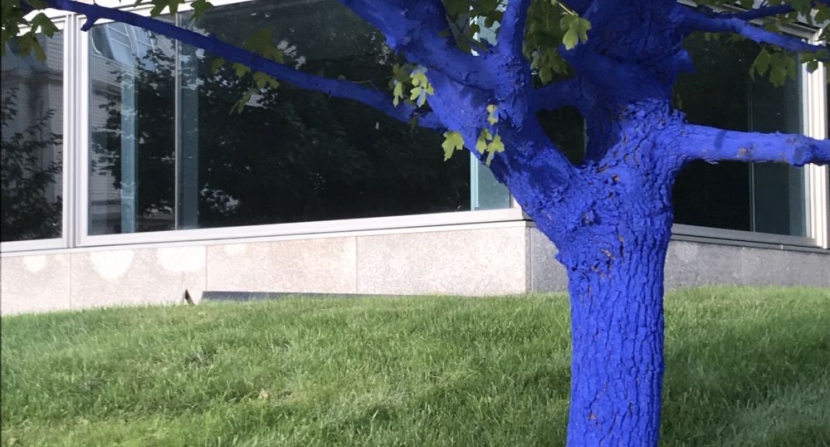 For Kon, use of vibrant blue is analogous to the ‘pink ribbon’ campaign for cancer awareness. “It’s about the power of color to get people’s attention, to capture an idea.” You have to admit The Blue Trees say “Now that we have your attention…”

Kon describes how he himself wasn’t all too aware of trees until he moved from an open, windy and relatively tree-free region of New Zealand to Melbourne Australia and he first saw trees changing colors. He grew interested in how people reacted to trees and how trees affected people. “Here in Brooklyn or in Melbourne it’s not like in New Hampshire where you can drive north on I-93, north of Concord where we visited friends and saw the variety of trees, and colors and experienced the season. Thousands of people driving north to the White Mountains to see colors change. We work so hard to create color, but nature does it effortlessly!”

It doesn’t take long for Kon to list what we might learn from trees. “I think we underestimate the intelligence of trees. We have an IQ; yet trees have another kind of intelligence that we can’t measure. Trees help one another. If you extend that lesson to human societies, we could all learn, eh?” 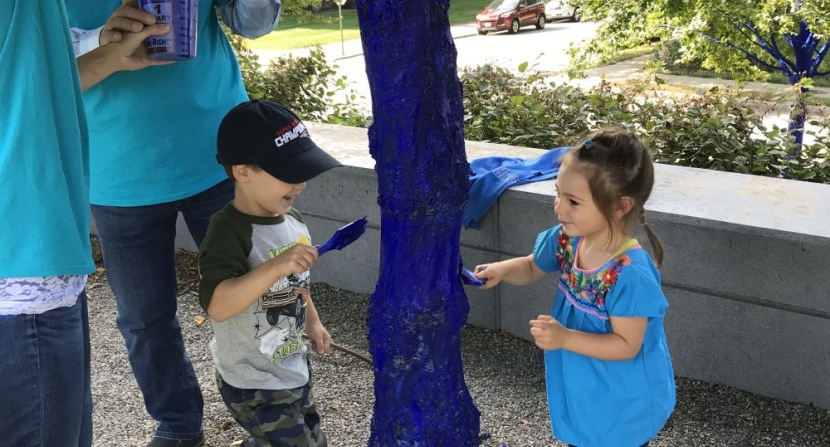 That reverence comes from years of experience watching how people relate to trees around them. When prompted for more, Kon obliges “Trees are mysterious in ways we just don’t know. We don’t tend to see trees as living and responding to one another, we think of them as timber or just sort of wooden.”

The Blue Trees is not his sole or even primary livelihood and yet Kon is serious about the art. From his Brooklyn sculpture studio, he has commissions for sculptural works to keep him busy all winter and beyond. Yet his passion for trees remains clear. “We were just starting out back in 2003. It took us 2 years to develop the right color. There is a context to this: we take photographs, we use social media, we involve schools and the community and then the trees go back to their natural color and then it’s done. The tree goes on living.”

Sometimes he has received requests to come back to re-color trees. A director of parks in Chicago wanted to color more trees blue. But it’s not just about coloring trees. “Even if a tree is already dying in some urban park, you don’t want to make it lurid by coloring it, let a tree die with dignity. There is a fine line between decoration and art. I don’t decorate trees, I walk away from all that.” 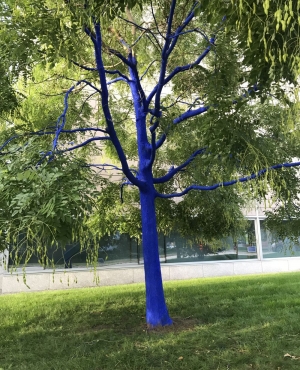 The Blue Trees is also hard work. “Art is a physical process. If you can get people to have an experience where they are physically touching a tree… For that short period of time, the child or the adult person and the tree are each touching one another.”

The educational message of The Blue Trees is designed to reach the next generation. “The more you can get kids to be with trees, the more they can appreciate them.” Kon launches the role trees play in producing oxygen, cleaning the air, purifying drinking water and cooling air in cities. The Blue Trees brings attention to forests as “the lungs of the Earth.” He adds wryly “tropical forests are not on some other planet.”

Obviously, he is preaching to my own choir.

Kon likes how people respond with “OK, then – what can I do? I mean how do we attract more supporters to care about trees and forests? Everyone wants to do something to help out if they can.” 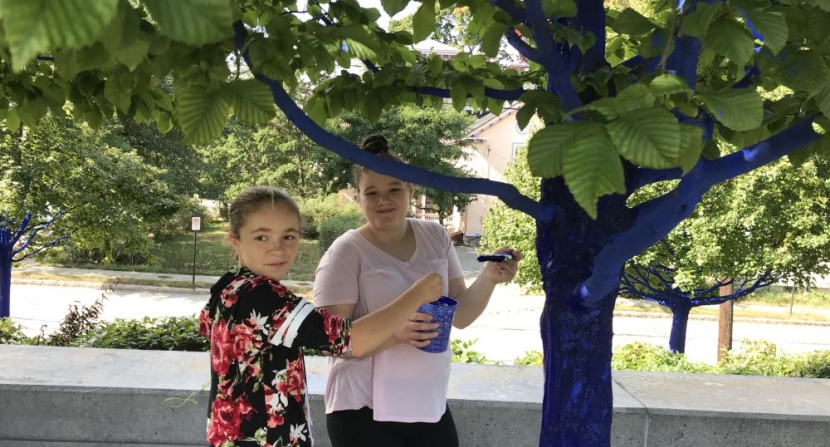 Coloring trees at the Currier Museum.

Even here, many take our trees for granted.  Kon grows animated: “We should be better than that. I mean we’ve gone to the bloody moon!  I took trees for granted too until I had an epiphany. I am learning so much more about the climate and the importance of oxygen that trees generate.”

“We’d like to highlight that the local trees in cities are linked to millions more trees in forests. We want to make connections from trees we see and care about in cities to the trees we do not see or seem to think about in distant forests of the Amazon or Asia.”

“Wherever we’ve done it, people just want to get involved and not just in New York City or London. There might be a child living in Manchester New Hampshire who is inspired enough to actually become involved in trees and in science and who wants to make a difference.”

Just as trees in Manchester can and do affect oxygen and air quality in other parts of the world, New Hampshire children who become the next generation of environmental leaders can and will affect the fate of trees and forests worldwide.

All other photos by Dave Anderson/Forest Society.