A Backyard Graphite Mine 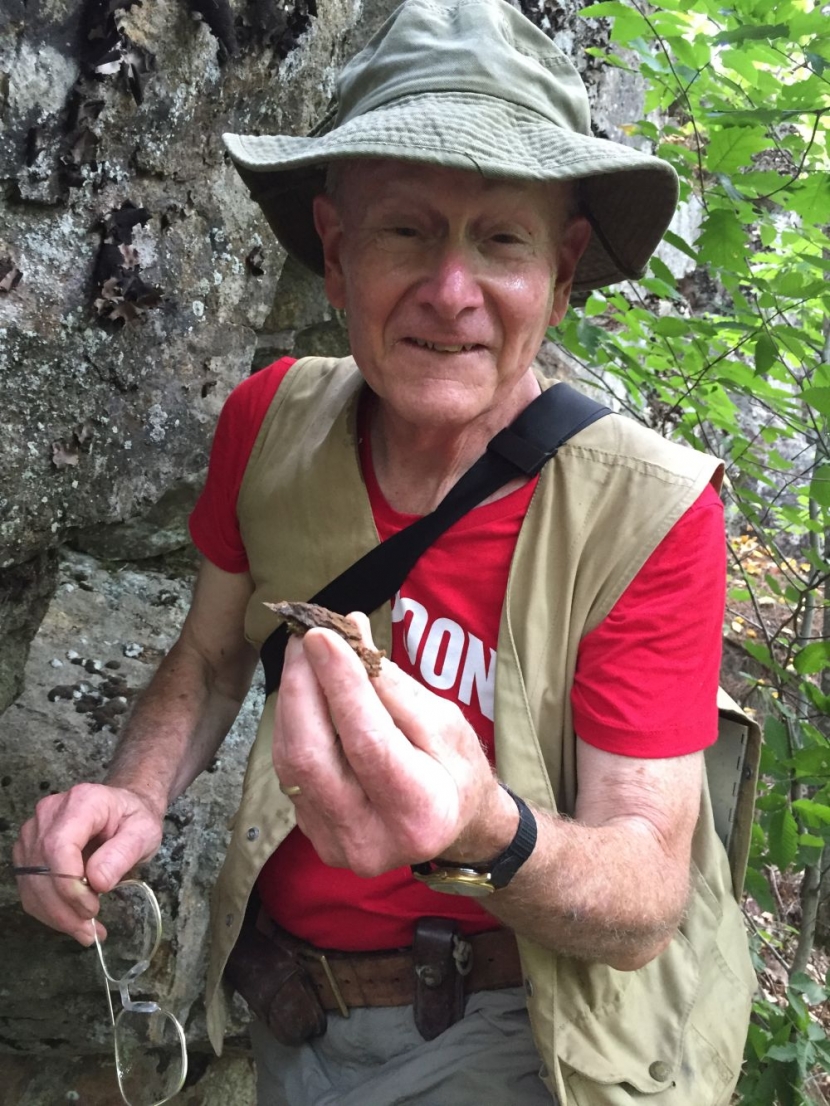 This story took time… time, extreme pressure and high temperature. It’s a story of complex NH bedrock geology but also remarkable coincidences. It’s the story of a short-lived, nearly forgotten chapter of NH history: graphite mining in the western hills of our State from the White Mountains to the Monadnock Region.

“Plumbago” (graphite) mines were historically located on both Mount Monadnock and Mount Kearsarge. NH Historian Jeremy Belknap mentions “plumbago” mining in his early History of New Hampshire published in 1792: “Black lead (plumbago) is found in large quantities about the Grand Monadnock in the township of Jaffrey.”

Two hundred, twenty five years later, I located a field geologist from the Carnegie Institution Geophysical Laboratory, Douglas Rumble - a graphite expert - to show me the obscure graphite “mine” located right in my own backyard. The mining location is hidden in plain sight beneath exposed ledges of steep granite on a south-facing hillside overlooking our farm. I’ve searched for the site many times while walking right past it.

This local South Sutton graphite mine was first mentioned in The History of Sutton by Augusta Worthen in 1891, the first Town History in the State prepared by a woman. Worthen’s chapter entitled “Physical Features” of Sutton includes a reference that “Meeting-House hill, located north-east of the South Meeting-house, is noted for the large quantity of plumbago found there. The surface of this hill is remarkably rough, steep, and uneven, which is a great hindrance to the obtaining of the plumbago.” 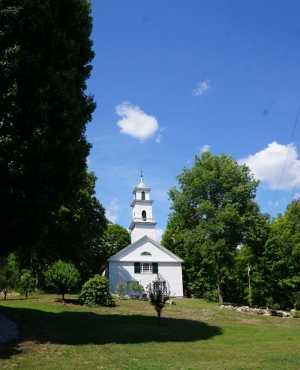 That much remains true: the ledges include small cliffs, benches and jumbles of large boulders geologists call “talus” on the south or “lee” side of the hill. Across NH are similar hills rounded smooth on their northwest faces by the advancing glacier more than 15,000 years ago. Their summits were scoured and plucked to create steep, broken cliff faces, ledges and jumbles of talus boulders facing southeast. Geologists call these formations “stoss and lee.” Check any southern NH topographic map and you’ll see the south and east faces are invariably steeper.

The mine site is extremely difficult to locate. It’s a series of exposed ledges where exposed contact zones of differing rock types were drilled and chipped away by local farmers using star-bit chisels to bore holes and stone-bars to extract chunks of rock. The best clue is rock color: red, iron-stained crumbling rock layers are interspersed within granite, quartz, feldspar and seams of black biotite. Small pockets of tiny shimmering garnets are found along with thin veins of graphite “spherulites.” The largest clumps of graphite were chipped out and removed piecemeal in the 1840’s.

Geologist Doug Rumble explained how graphite formed. Veins are formed by precipitation from hydrothermal (hot liquid) fluids injected or seeping into rock fractures. Basically, a liquid solution of carbon dioxide (CO2) and methane (CH4) under tremendous pressure leached into cracks in surrounding rocks and cooled to crystalized carbon. The veins are found at intersections of faults and dikes along pluton wall rock contacts and in shear zones. These sites are randomly exposed on a diagonal line stretching south from the western White Mountains beginning at northern shear zones at Eliza Brook and the Baker River and stretching south to the Keene area. Historical mine sites are located at Bristol, Mt. Kearsarge, Sutton, the “Franklin Pierce” mine in Washington, Antrim, Crotched Mountain, Osgood Hill mine in Nelson, Marlboro, Monadnock, Walpole and Keene. Each mine site has its own unique history.

How did early settlers of New England know the value of graphite and learn to recognize it in the field? Rumble relates New Hampshire graphite prospectors discovered exposed veins of graphite from Old World knowledge. The British Monarchy from the time of Henry the 8th in the 15th Century had maintained a monopoly on sales of graphite for pencils and to strengthen smelting crucibles. Graphite mines were operated commercially at Seathwait in Borrowdale of the English Lake District from the 1600’s to the 1830’s and Tin Mines operated at Cornwall, UK. Rumble says Borrowdale deposits served as an “exploration model” for finding graphite in New Hampshire. A graphite mine at the Bristol, NH site was directly compared to those at Seathwait, UK by J.D. Dana in 1823.  In Britain, forests were cut and vegetation was cleared with fire and soils overburden washed from ledges by rain and erosion. NH Farmers had cursory knowledge of mining in England and local cliffs with odd rock types were probed for ore and mineral veins.

An 1844 report on the active, working mines in NH by C.T. Jackson states “Black lead or graphite is a mineral of considerable value to the people of the State, and its sale brings in a constant, though not very great, revenue to those who are engaged in the business. The beds of plumbago are not very large, and only employ the farmers during those intervals in agricultural labor when hands can be spared from other work.” (Jackson 1844, p.-188) Nearly all the NH graphite deposits that Douglas Rumble has studied are mentioned by C.T. Jackson and referenced by local Town Histories and were located via interviews with local residents. 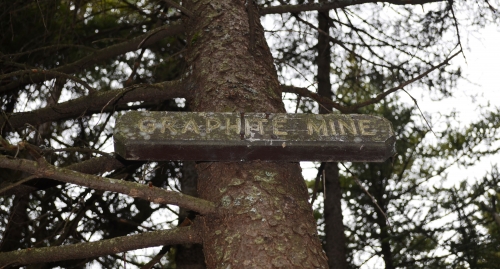 The Annals of The Grand Monadnock by Allan Chamberlain reveals a graphite mine in operation high on Mount Monadnock in 1849. Chamberlain wrote “it was attempted in 1840; perhaps even earlier.” It’s likely the Monadnock graphite mine operated from 1847 to 1850 with little commercial success – small veins yielded scant quantities of graphite and the mountain cliff location logistically impractical to operate successfully.

There is speculation that renowned American Naturalist, Henry David Thoreau and his brother, Johnathan Thoreau’s hand-crafted cedar-wood and graphite pencil business in Concord, MA utilized NH graphite during their peak period of graphite mining around 1850. Thoreau is closely linked to Mount Monadnock, but there’s no evidence Thoreau visited the Monadnock mine located along the Cliff Walk Trail and not far from Bald Rock.

Graphite was not commercially profitable on a large scale. Graphite releases water soluble arsenic. Dried graphite contains deadly arsenic dust. Perhaps one reason Thoreau and his brother Thomas died at relatively young ages could have been related to ingestion of arsenic from working in their family’s pencil business? After Walden Pond, H.D. Thoreau returned to Concord, MA to worked in the pencil business for the duration of his adult life. He improved inferior graphite by adding clay as a binder (Conte’ process). Later Thoreau converted the pencil factory to produce graphite used in the early electrotyping process. The Thoreau family pencil business sold and eventually became Ticonderoga pencils.

Douglas Rumble couldn’t immediately locate the Sutton graphite mine even though he had visited previously. With rock hammer in hand, he checked rock contact zones exhibiting fractured crumbling rock layers at exposed cliffs. It felt like prospecting for gold with “Yukon Cornelius.” Rumble chipped at the rock and checked fragments with a hand lens looking for graphite spherulites and muttered “nothing.” 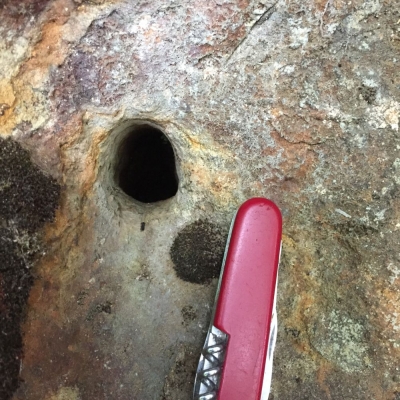 graphite mine bore hole by DA

The chemistry of hydrothermal graphite veins is complex enough to warrant an advanced geology degree. Rumble explained: “graphite veins truncate metasedimentary rocks of the Early Devonian-Silurian age and range in size from microscopic sheets measured in microns to a meter in thickness. In addition to graphite, the veins contain quartz, tourmaline, ilmenite, sillimanite, muscovite or cholorite.”  Rumble added the Sutton deposit contains Iron-aluminum oxide (Fe-Al-S-O4) and a mineral called Hercynite. “The rock layers here are all messed-up; contact zones are a jumble of different rock types” he said while peering through his hand lens.

The location the “Lost Graphite Mine of Meetinghouse Hill” was confirmed only when he returned to his office and reviewed field notes indicating which ledges had been chipped previously during field trips with students. My vision of a spooky mine shaft and rusty, discarded rail cars for ore evaporated with the reality that we couldn’t positively identify the mine even though Rumble had visited it previously. We found bore holes drilled into ledges near with rock samples discarded during previous visits. 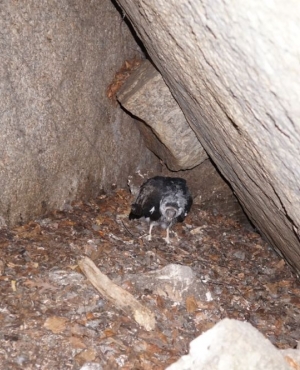 Turkey Vulture chick in cave at graphite mine

The pursuit did feature on dramatic “Indiana Jones and the Lost Mine of Doom” experience: while probing talus boulder caves, an unseen scurrying animal retreated deep into its dark lair. The hissing noise from inside a large cave - big enough to crawl into - was terrifying. I entered on my belly with camera flash on to light-up the unseen creature before wriggling back out fast. Douglas used his camera to also capture what turned out to be a turkey vulture juvenile not yet fledged from its cave nest.  Turkey vultures nest on the ground – in caves or other spooky dark places. Jumbles of boulders are perfect turkey vulture habitat.

Steep forested hillsides of southern New Hampshire conceal a forgotten history of graphite mining. The mine in my backyard is even guarded by a hissing gargoyle in the form of a turkey vulture!