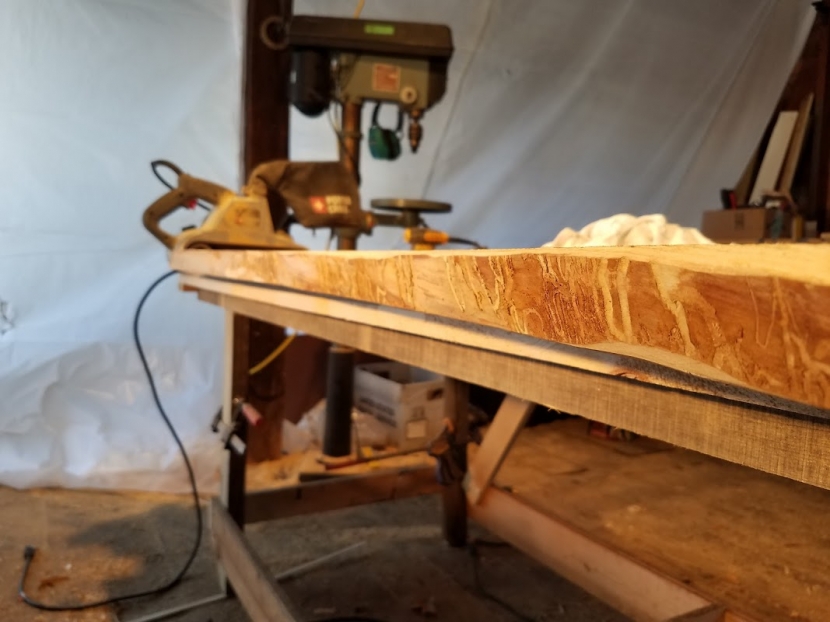 Like many people, I recently had to leave my office behind and suddenly became a remote-worker. Most of the work-at-home I had done in the past involved reading and responding to email correspondence, writing plans and schedules, and it could easily and quickly be done at my kitchen table. Now that I am staying home for the foreseeable future, my day-to-day work has become increasingly more difficult to accomplish without a proper workstation. Couldn't ask for a better excuse to head out to the barn and finally put one of those ash slabs I’ve been slowly drying to good use.

Last summer I met a man who was selling large slabs of rough-sawn wood out of his yard. His town was systematically going through the streets and roadways cutting down hazard trees, mostly ash trees affected by Emerald Ash Borers. The enterprising Kevin Stinson, started his own side business, Stinson’s Precious Woods, and quickly went to the task of sawing the Standing Dead ashes and spalted sugar maples into lumber rather than seeing them bucked and split into firewood. I loved the pragmatic and prophetic philosophy of keeping this unique and precious resource intact rather than splitting and burning it for fuel. I purchased as much as I could fit in the truck and stacked it in my barn for later.

The so-called problem with using live-edge slabs for woodworking projects is the inevitable checks, cracks, and imperfections that are typically found in hand-harvested and air-dried material. Any good lumber grader would send this stuff off to be pallets at best, but I tend to look at these marrs and marks not as flaws of imperfection but highlights of nature's beauty. Using another hunk of scrap from the barn (black walnut) I will make decorative and functional bow ties to hold the crack together and stop the spread. In nature the black walnut would exude a biochemical through its root system to stunt the growth of a competing ash. On my desktop surface the two contrasting species complement and support one another harmoneously.

Cut out your bow ties with a band saw, trace its shape onto the slab over your crack, cut it all out with a router and chisel, glue it down and you're solid

Rather than straight cutting off the edges where the EAB gnawed its way through the life-giving cambium layer, I choose instead to simply strip off the bark and publish the story of how this slab of wood came to be. The EAB made its way from eastern Russia, northern China, Japan, and Korea all the way to Michigan, crossing Canadian provinces. By the spring of 2013 it had been officially detected in backyard forests and woodlots of New Hampshire. People saw the warning signs but were hesitant to change or lacked awareness that their misguided actions would help continue to spread the pest from tree to tree. As early as 2011 the State of New Hampshire had prohibited the import of firewood from out of state. The spread of EAB continued and the legislature revised the quarantine in 2018 to include “buy it where you burn it” recommendations which ask visitors and state residents not to transport firewood more than 5 miles from its source. I consider how relevant the EAB story is today while I am isolated at home, hand-rubbing a natural oil finish on the soon-to-be desktop.

I choose to say no to polyurethane and opt to use this natural and non-toxic walnut oil. When rubbed into the slab the wavy grain really starts to shine through

The pest is long dead and gone from the bark of my lumber, but I do not let it’s destructive nature put an end to the life of this remarkable ash. The soul of the tree will live on as my desk and sounding board for sharing information about the spread of agricultural pests. Pests that ultimately are spread by humans and exacerbated by climate change… but let's save that topic for another time. For now I encourage you to rethink and repurpose those roadside trees. Heating our homes with wood is a wonderful Yankee tradition, but creating something from nothing, something that will last and be useful is my personal preference. Ashes to ashes, dust to desk. From firewood to furniture.