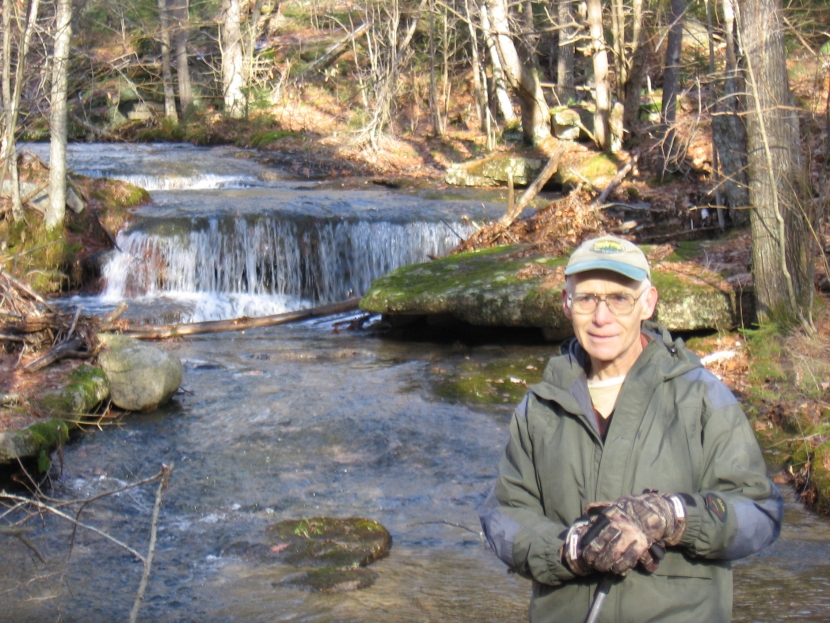 Over the past two-and-a-half years, the Forest Society worked with the Lakes Region Conservation Trust and the Belknap Range Conservation Coalition to raise funds to buy four private properties in the Belknap Range in order to conserve them and keep them open to the public. While the partners raised the money, Dave Roberts of Farmington, a retired high school teacher and local conservationist, bought one of them -- the trailhead off the Mt. Major parking lot -- in order to keep it off the open market until the funds could be raised. Long after the first three properties were purchased, legal red tape held up the piece that Roberts held. On Dec. 16, at long last, the issues were cleared up and the Forest Society was able to close on the property and buy it from Dave. Following is an updated 2013 Forest Notes article about Roberts and his map-making explorations of the Belknap Range.

Exquisite waterfalls, gorges, caves, boulders, views, flumes, remnants of a quarry, an iron mine and farms: If there’s a beautiful natural feature— or an interesting man-made one—in the Belknap Range, Dave Roberts has found it.

Few people know the Belknap Range as well as Roberts, 80, a retired teacher from Farmington who dedicated himself to exploring the range after retiring 25 years ago. And he shared his discoveries in true explorer fashion— detailed maps. His were the first comprehensive hiking trail maps of the range, given to local libraries to share as long as they only charged what it cost to reproduce them.

“I found lots of views that you didn’t know of before,” Roberts said in an interview at his home. “I knew a few people equally avid about the beauty ofthe natural world. I figured there must be others like us.”

Turns out there were many others like them, and Mt. Major and the Belknaps have grown increasingly popular as destinations for not only hiking but also snowmobiling, horseback riding, hunting and skiing. All along the way, Roberts, a volunteer director of the Belknap Range Conservation Coalition (BRCC) since its inception in 2006, has encouraged others to explore and conserve the land by sharing his discoveries and his maps. He may have retired from the classroom, but he never stopped being a teacher.

The Forest Society honored Roberts for his own enthusiasm and efforts by presenting him with the 2013 Conservationist of the Year Award.

“With his vision and persistence, Dave inspired others to discover and appreciate the trails and treasures ofthe Belknap Range and— following his lead—to work to protect them,” said Jane Difley, Forest Society president/ forester, when presenting the award.

Roberts’ clever method of getting people to care about the Belknaps was to put into their hands maps that would enable them to experience the range for themselves. Some of his maps read like treasure hunts with abbreviations marking features worth finding: BF for boulder fields, RF for rockfall, C for boulder caves. One of his most utilized maps was one that helped hikers traverse the entire range, from Belknap Mountain to Mt. Major.

“A true aficionado of the Belknaps has to take the cross-range hike,”Roberts said. “I made an entire map to allow them to do that with some ease.”

Before his map, there was only one trail, “and not a very handsome one,” said Roberts. He drew a line on his map that takes hikers to the top of East Quarry and West Quarry mountains along what is now known as“the Quarry Trail,” named forthe abandoned granite quarry there, and to the top of Mt. Klem, for“some ofthe best views of Lake Winnipesaukee around.” The BRCC provides a new Belknap Range map now, dedicated to Roberts, that features the most clearly marked trails.

Roberts had already hiked the 4,000-footers in the White Mountains when he decided to focus on the Belknaps as a retirement project. They were closer to his Farmington home than the White Mountains and he was already familiar with Mt. Major, which was close to the W. Alton camp his family had when he was a boy. He realized that, with the exception of Gunstock Mountain and its recreation area, there were many other peaks, brooks and valleys in the 31,665- acre range that weren’t well known and represented something of an undiscovered country. He started by following the brooks in the range, carefully noting the locations of waterfalls, gorges and flumes while roaming.

“I’m much more contented off the trails than on them,”he said. “There was always the excitement of discovery. And there’s a comfort in knowing your landscape.”

Roberts also researched the range to learn more about odd or interesting relics he found: a charcoal kiln, leftoversfrom an iron ore mine, cellar holes and logging remnants. He consulted libraries as well as old-timers who knew of some of the first families in the area and how they used the land. One of the stories he uncovered was how George Phippen, one-time owner of the Mt. Major summit before it became state property, built the peculiar stone structure there as a hiking shelter. Phippen, who lived in Florida but summered in the Lakes Region, hired a local farmer and his horse for the project in 1925. “I think his interest was in serving the hiking public,” Roberts said. It originally had a wooden roof—actually two roofs, both of which blew off during winter storms. The second roof landed—intact—about 200 yards down the slope toward Alton Bay, where it remains to this day, well hidden in the woods.

“It would have been nice to have been there (to see it sail off), but you probably would have traveled right with the roof,” Roberts said.

After so many years of appreciating Mt. Major himself, Roberts sees its popularity as a means to an end.