Trails to a Legacy: Bequest Adds 430 Acres to the Heald Tract 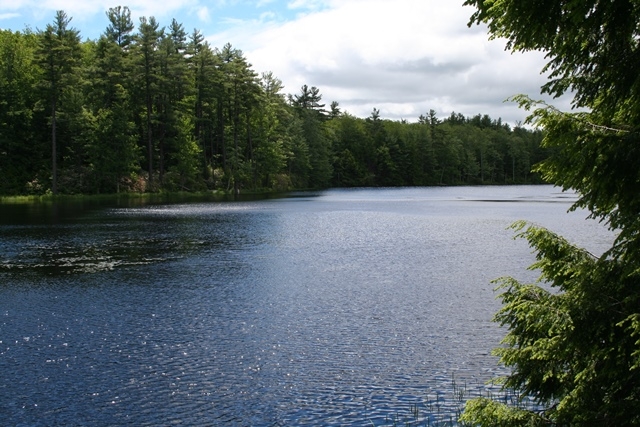 Heald Pond is one of the four ponds on the Heald Tract.

Lucille Heald’s obituary in the June 22, 2014 Union Leader  lists her many contributions to her community of Wilton and that the love of her life was the late Philip Heald, Jr. It ends with an invitation: 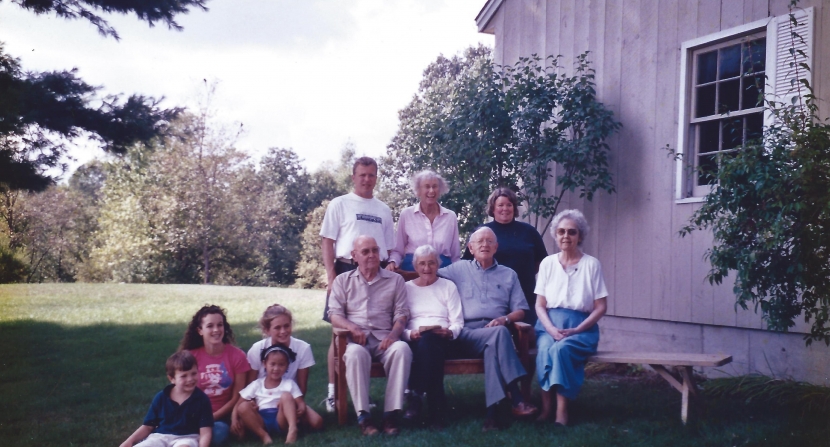 The Heald Tract is a nearly 1,500-acre reservation in southern N.H. donated to the Forest Society over many decades by members of the Heald family. The most recent donation was of 430 acres and a generous monetary bequest from Lucille Heald’s estate. These fields, forests and trails through old apple orchards are part of a system of nearly eight miles of much loved trails on the Heald Tract. Now they are a permanent part of a stronghold of natural beauty – a living memorial to a family’s extraordinary land stewardship and generosity.

Ross Heald, Phil Heald’s brother who is 90 and lives in Jackson, traces the beginnings of that legacy back to his grandfather, who was the one who started collecting farms as they came up for sale in the Wilton area and holding onto them to pass down to his son, Phil Heald, Sr.

Phil Sr. trained in forestry and ran an apple orchard there. Phil Jr., Ross and their sister Helen grew up on the farm, surrounded by horse-powered lumbering and apple production.

“We walked all over that land. We all just really loved it,” Heald said.

Conservation, he added, “was sort of driven into us, I would say.” 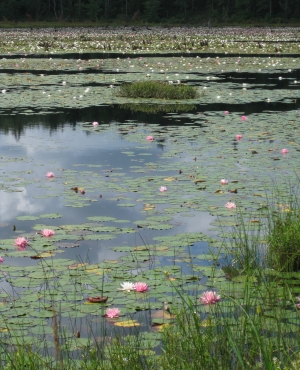 Water lilies bloom on one of the ponds on the Heald Tract. Bailey Grotton photo.
When the three siblings inherited the land, it was Phil, the eldest, and his wife Lucille who lived there and managed the apple orchard. Phil also served 11 terms in the N.H. House and as chairman of SPACE, the Statewide Program of Action to Conserve our Environment. He strongly supported Current Use and other conservation legislation and was active in the Forest Society. Concerned about the development he saw transforming southern New Hampshire, he and his brother Ross and sister Helen Rader, who lived in South Carolina, determined that the Heald land would remain unspoiled. Beginning in the mid-1980s, they gave the Forest Society several pieces of the family land totaling nearly 1,000 acres. Later, Phil and Lucille Heald gave additional parcels. Brian Hotz, now vice president of land protection at the Forest Society, was one of the land agents who worked with Phil Heald on the donation logistics.

“He was all about the trails,” Hotz said. “When he would call you to say they were giving more land, he would always talk about the section of trail that was on that land. He was a great caretaker of all of his land but his real love was for trails, and he created a fantastic network of them.” 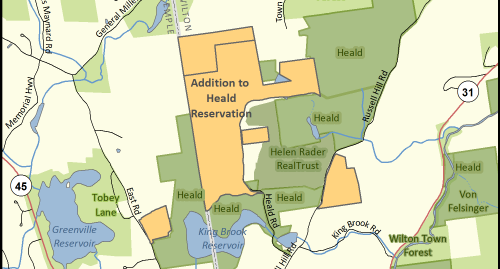 Sometimes, the phone call wasn’t about trails or land at all. “Phil had a great sense of humor. He would call you up just to tell you a joke,” Hotz said.

He also would call about demolition projects. The Healds had such high regard for the land that they made certain that the house, barns and other structures used on their once-thriving apple farm would be removed. In fact it was a condition of donating.

“Phil called it ‘putting the land back,’ “ Hotz said.

Trails were another matter entirely. Heald definitely wanted those to be permanent.

Phil Heald’s zeal for trails ran the gamut from laying them out to clearing them with chainsaws and handsaws and pickaxes for as long as he was able. He got help from his late nephew Phil Rader, known as “Young Phil,” local trails groups and Forest Society volunteer land stewards. Land Steward Ray Jackson, now president of the trails and hiking group Trailwrights, worked with Heald out on the trails for 18 years, much of that time with other volunteers who called themselves the Not Yet Over the Hill Gang. Jackson still enjoys using the handmade bow saw Heald gave him.

“It cuts through limbs like butter,” he said. “I lost my father when I was 14, so to me he was like a father figure. He used to tease me, because I live in Townsend, Mass., and he’d say, ‘Did you get a permit to come up to New Hampshire?’ “

Besides state politics and the country music that Phil Heald loved, conservation also came up in their many conversations along the trails, Jackson said, and it was clear that Heald often thought about how his family’s land could be a help to others.

“He thought it was important that people be able to enjoy the land and see nature, to go down by the pond to see the flowers that bloom in the spring,” Jackson said.

An article in the Milford Cabinet and Wilton Journal dated Aug. 13, 1970, pulls from a Forest Notes story on Heald, in which he explained his strong feelings about how keeping private land open to the community is a two-way path. 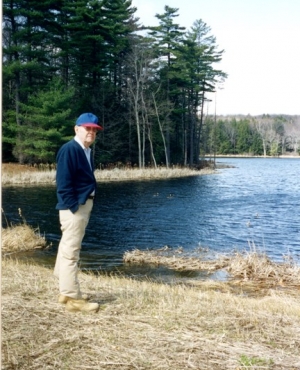 Phil Heald, Jr., lived on family land in Wilton for most of his life, and kept it open for the public to enjoy.

“Owners of large tracts of land have a responsibility to share this with other people if proper rules and regulations are observed, but a greater responsibility must be borne by the users of the land whether it be hunting, fishing, skiing, snowmobiling or hiking and etc., to assure that the land will not be defiled by vandalism, littering and general disregard for the landowner’s rights,” Heald said. “If a proper balance can be achieved in these areas, it would go far in providing needed open space areas which are so badly needed by today’s society for their relaxation and enjoyment.”

In his older years, before his death in 2007, Heald continued his personal stewardship of the Heald Tract.

“He’d drive around every day in his truck and see what was going on and who was out there. He pretty much knew everything,” said Sam Heald, Phil Heald’s nephew and Ross Heald’s son who lives in Bedford.

His uncle had spent his entire life on that land and it bothered him to have to leave New Hampshire, Sam Heald said: “He felt there was never any reason to leave the farm or the general area. The only time he ever left New Hampshire was to go to our wedding in Weston, Mass., and the next time was to have knee surgery in Boston.”

Forest Society land stewards now carry on Phil Heald’s passion for the land and trails, led by Bart Hunter, who is also the chair of Wilton’s conservation commission.

“Bart would be one of Phil’s favorite people, because Bart is out there keeping up the trails,” Hotz said. 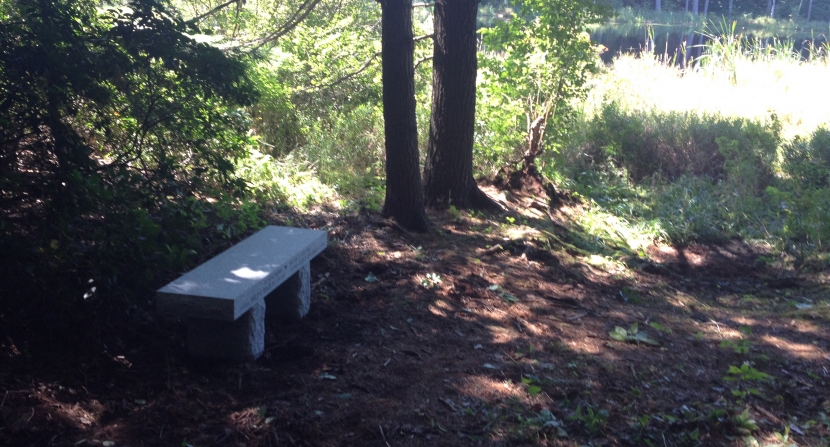 A memorial bench inscribed with the names of Phil and Lucille Heald offers a quiet place to rest and enjoy one of the Heald Tract's wildlife ponds. Plaques on stone markers elsewhere memorialize Helen (Heald) Rader and two of her children, Phil and Betsy.

Hunter said he has recruited a crew of about 25 local people onto his email list who are willing to come over to help on workdays. Many on the email blast list are people he’s met on the trails who are only too happy to give back to the land they enjoy.

Hunter said plans are in place for some trails work on the latest 430-acre donation from the Heald family.

One can’t help but to imagine the satisfaction that such words might bring to Phil Heald, as his family’s legacy is appreciated by all who visit the Heald Tract and the family’s model of stewardship carries on still today.