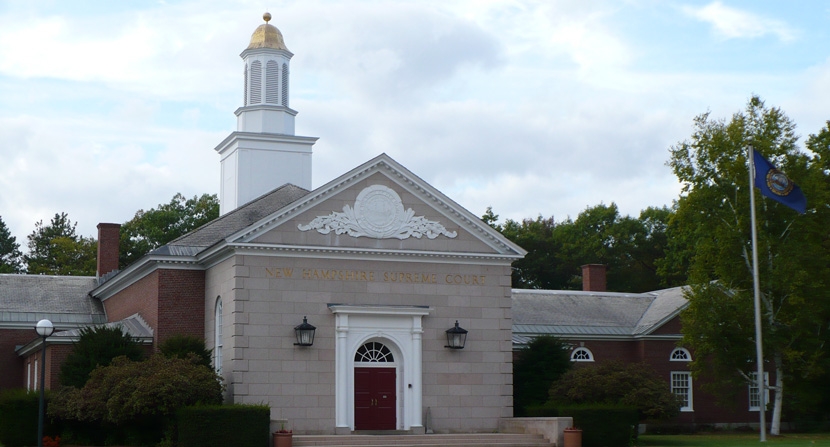 On May 15, the New Hampshire Supreme Court heard two hours of oral argument on the Northern Pass appeal of the decision by the New Hampshire Site Evaluation Committee (SEC) to deny the Northern Pass project a siting permit. The seven member SEC subcommittee voted unanimously to deny the permit in March of 2018.  A Supreme Court decision is expected by the end of the calendar year and perhaps sooner.

There was a line to get into the New Hampshire Supreme Court hearing room for the 10:00 AM hearing by 8:30 AM. Media on hand included WMUR, In Depth NH, NHPR, Union Leader, and the AP.  Forest Society staff were among more than 100 members of the public in the hearing room to witness the proceeding. Read a press account of the hearing.

The Forest Society’s lead attorney, Amy Manzelli of BCM Environmental & Land Law, and Danielle Pacik, Deputy City Solicitor for the City of Concord, presented oral arguments on behalf of the interveners asking the Court to affirm the SEC decision. Chris Aslin, an Assistant Attorney General for the State of New Hampshire appointed to serve as Counsel for the Public, also appeared in support of the argument to affirm.

Stream and listen to the entire hearing.

While it is risky to assume anything about the outcome from the tenor or nature of the questions posed by the five justices, on balance it seemed a good day for our argument. The justices appeared to have done their homework and were familiar with the issues. The Appellants went first, and the questioning was pointed. Chief Justice Lynn, at one point, asked whether (it was more of an observation, really) Northern Pass’s “presumption of approval is inconsistent with the burden of proof.” Practical issues were also on the minds of the justices, as we heard questions about the implications of remanding the case back to an SEC that would not be the same subcommittee as those who sat through 70 days of testimony.

The next and near final step in the appeal process is for the Court to issue a written decision.