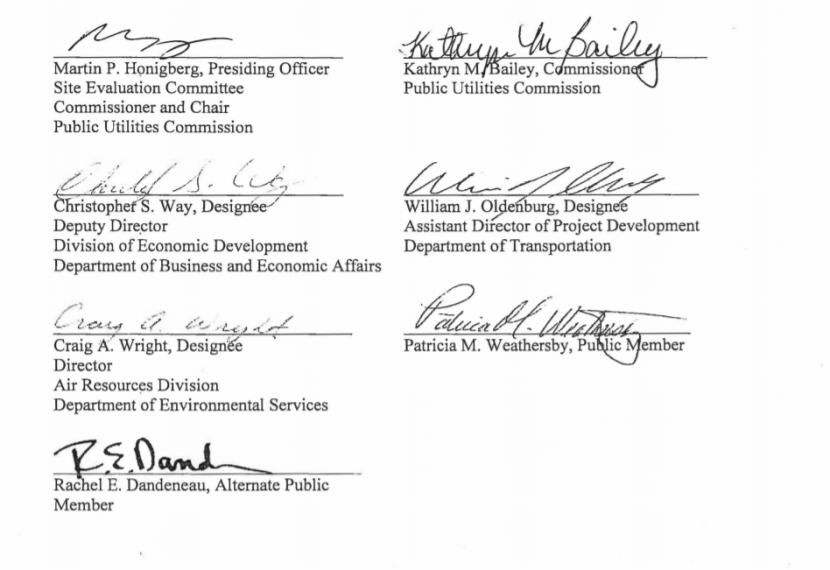 The seven SEC subcommittee signatures on the unanimous decision to deny Northern Pass.

The New Hampshire Site Evalution Committee (SEC) issued its formal written decision today to deny the application by Eversource for a Certificate of Site and Facility for the controversial Northern Pass transmission line.

"Despite the largest application in the history of the SEC and more than 70 days of testimony, Northern Pass could not overcome a fundamentally flawed concept. New Hampshire has won the day," said Jane Difley, President/Forester of the Society for the Protection of New Hampshire Forests.

The written decision runs 287 pages (click here to read it), but is summarized succinctly at the end:

The Applicant has failed to prove by a preponderance of the evidence that the site and facility, as proposed, will not unduly interfere with the orderly development of the region. In coming to this conclusion, we considered all relevant information regarding the proposed Project, including potential significant impacts and benefits. 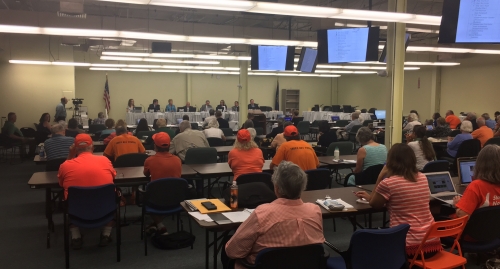 One of more than 70 days of hearings held by the SEC.

In order to issue a certificate, this Committee would have to find four things: (i) the Applicant has adequate financial, technical, and managerial capability to assure construction and operation of the Project in continuing compliance with the terms and conditions of the Certificate; (ii) the site and Project will not unduly interfere with the orderly development of the region with due consideration having been given to the views of municipal and regional planning commissions and municipal governing bodies; (iii) the site and Project will not have an unreasonable adverse effect on aesthetics, historic sites, air and water quality, the natural environment, and public health and safety; and (iv) issuance of a certificate will serve the public interest. See NH RSA 162-H:16, IV. As we concluded that the Applicant did not meet its burden in demonstrating that the Project would not unduly interfere with the orderly development of the region, we could not grant a Certificate even if the Subcommittee were to find in favor of the Applicant on the remaining three prongs. There is, therefore, no need to go further. The Application for a Certificate of Site and facility is DENIED.

The Forest Society intervened in the SEC Northern Pass docket and has opposed Northern Pass as proposed throughout the seven-and-a-half year saga.

"Even a preliminary reading of the decision to deny Northern Pass reveals the extent to which Eversource failed to make their case under the law," said Jack Savage, VP for Communications/Outreach at the Forest Society. "And to what extent the broad opposition—individuals, communities and organizations like ours—successfully argued what anyone with common sense already knew: that a transmission line of this scope and scale does not belong in New Hampshire.

"We’d like to think that Eversource could understand that no means no," Savage said. "They have already asked the SEC to reverse its decision to deny. Northern Pass shouldn’t be able to make a second request for a reversal, but they may. We have already filed papers in support of the SEC decision to deny and asking the SEC to not change its mind. If Eversource files more papers, we will oppose those too."

On February 1, 2018 the SEC subcommittee voted unanimously to deny the requested Certificate of Site and Facility. Eversource filed a motion for rehearing prior to the written decision. In response, the SEC subcommittee vacated the oral decision, thus delaying any response from the SEC on the Motion for Rehearing.

Earlier in March, SEC attorney Michael Iacopino told reporters that a, SEC response to any Motion for Rehearing would not likely come before early May. Should Eversource pursue such a motion, and presuming that the SEC would deny it, Eversource could then appeal to the  New Hampshire Supreme Court. The Supreme Court could choose not to take the appeal. If the Court would take an appeal, it could be 12-18 months before any ruling.

Michael Cousineau's story in the Union Leader is here.

You can read Eversource's response the the formal denial of Northern Pass here.