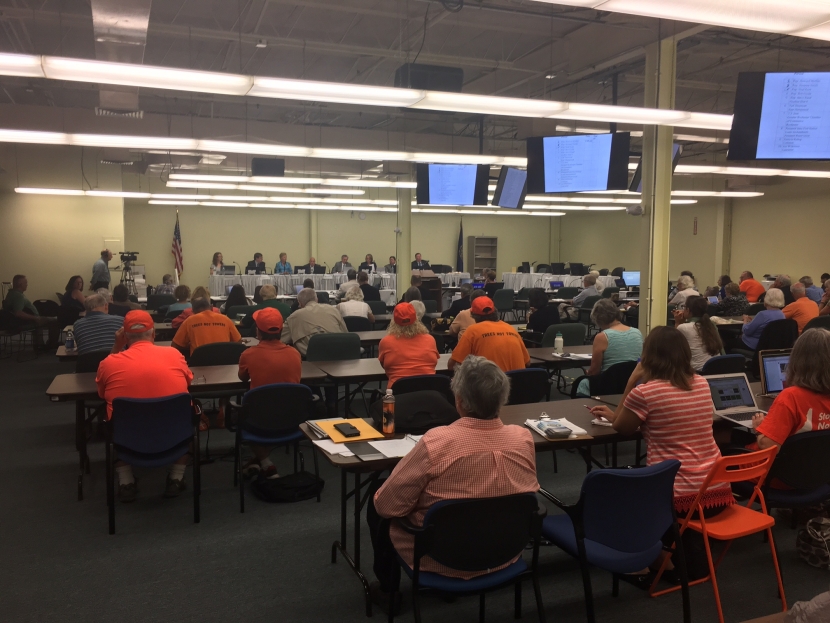 The New Hampshire Site Evaluation Committee during the adjudicative hearings in July 2017.

On Thursday Feb. 1, the New Hampshire Site Evaluation Committee voted 7-0 to deny Northern Pass a Certificate of Site and Facility. To understand the SEC decision, it’s helpful to look at the transcripts of that day’s deliberations by the SEC subcommittee members.

In the morning, Chair Martin Honigberg explained the process.

“I'm going to summarize the statute and the rule and the question,” he said. “The statute is RSA 162-H:16, the required findings regarding the issuance of a certificate. Roman IV says, "After due consideration of all relevant information regarding the potential siting of routes of a proposed energy facility, including potential significant impacts and benefits, the Site Evaluation Committee shall determine if issuance of the certificate will serve the objectives of this chapter. In order to issue a certificate, the Committee shall find that," and Paragraph 24 (b) says, "The site and facility will not unduly interfere with the orderly development of the region, with due consideration having been given to the views of municipal and regional planning commissions and municipal governing bodies."

Honigberg continued: “We have two rules that are directly relevant to this criterion. One is Site 301.15, which are the Criteria Relative to a Finding of Undue Interference, and it says, "In determining whether a proposed energy facility will unduly interfere with the orderly development of the region, the Committee shall consider: (a) the extent to which the siting, construction and operation of the proposed facility will affect land use, employment and the economy of the region; (b) the provisions of and financial assurances for the proposed decommissioning plan for the proposed facility; and (c) the views of municipal and regional planning commissions and municipal governing bodies regarding the proposed facility."

Honigberg then said “…we're going to ask people [subcommittee members] to say where they are as a way of bringing the discussion about orderly development to a close.” He went on to point out that “it is the Applicant's burden to establish, more likely than not, that there will not be an undue interference with the orderly development of the region.”

Then each member said whether they thought Northern Pass had met the required burden of proof, and why.

Chris Way, the representative from the state department of economic resources, began:

Public member Rachel Dandenau was next to express her conclusions:

Patricia Weathersby, also a public member of the subcommittee went next:

Next up was William Oldenberg, from the New Hampshire Department of Transportation:

Craig Wright, of the New Hampshire Department of Environmental Services, was next:

Next was Kathryn Bailey of the New Hampshire Public Utilities Commission:

Chairman Honigberg, also from the New Hampshire Public Utilities Commission, was the last to weigh in:

The discussion in the morning indicated that based on the record, the SEC subcommittee members each concluded that Northern Pass had not met the burden of proof on the Orderly Development standard.

After lunch, the subcommittee reconvened. Kathryn Bailey made the initial motion to deny the Certificate, seconded by Rachel Dandenau. There was discussion.

“This morning's straw vote was revealing to me,” said Chris Way. “In that I was sort of somewhat surprised of the amount of agreement that we had amongst each other. I was also a little surprised that each time I heard from our different disciplines, I found that I agreed more and more on certain things that even I wish I had said. And, so, I guess my point is, on orderly development, it's not even close, doesn't seem close to me. That it's not something where we're going to be able to come back and walk out of it. It seems like that -- that today was sort of a decision point, and it would be hard to go somewhere from here.”

The subcommittee discussed the pros and cons of ending the deliberations. With respect to the administrative record overall, Chair Honigberg said,  “I mean, that said, I have a lot of confidence in the work that the Subcommittee has done, the care with which it reviewed the record, considered the submissions of all the Parties, the evidence, and the record we have.”

Ultimately, motion was made to end deliberations, which passed 5-2. A motion was then made to deny the Certificate. It passed 7-0.