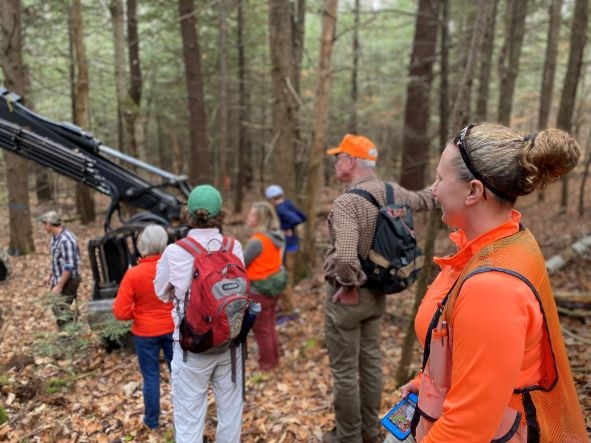 A warm Saturday morning in early November brought out more than 20 people to Deering at 9 am for a 3-hour tour of the 270-acre Wilkins-Campbell Forest Reservation owned by the Forest Society. 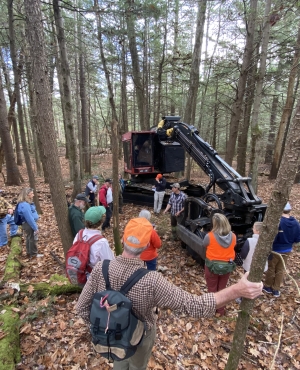 Jake Bronnenberg explains the parked feller-buncher
Our first stop was one area marked and flagged for harvest and machine access but not yet cut. The discussion included how consulting forester, Jeremy Turner of Meadowsend Consulting Company, had marked trees to be cut and flagged the main access trail as well as a "sensitive areas" of young hardwood sapling regeneration in a former opening created by a previous timber harvest conducted approximately 20 years earlier.

The next stop along the main skid trail included a stop at the cable skidder with a full hitch of cut logs being drawn from the woods to an open field that is serving as a temporary timber landing for sorting logs that will be processed into various wood products.  A walk further along the skid trail reached a tracked machine called a "feller-buncher" with a processing head installed in this case for cutting and de-limbing hemlock logs.

Jake Bronnenberg is employing a "hybrid" style harvesting system for efficiency and safety while minimizing unmerchantable slash cluttering up the log landing. He is using the processing head (CTL or "Cut-To-Length") to cut and delimb most of the trees. He also uses a chainsaw to cut high-quality and oversized trees by hand. Hand-felling using a chainsaw is for some of the oak and pine logs rather than exclusively using the mechanized harvesting equipment. He is not processing cut trees into logs in the woods, like on a typical CTL job. 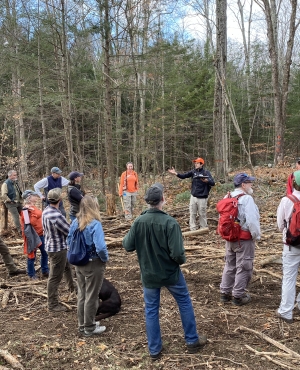 The next stop was an area that had recently been cut. We viewed the residual stand of trees left to grow and provide seed sources for regeneration of the next forest.

Field forester Gabe Roxby pointed out where individual trees were cut amid others left to grow. Gabe explained several of the wildlife habitat, soils and water quality considerations of the timber harvest including snag tree retention for denning and nesting cavities and creating small brush piles for wildlife cover.

The group viewed cut stumps to learn how Jake Bronnenberg cut each stem to control the direction of the tree fall to prevent damage to standing trees during felling and when skidding the cut logs out of the woods to the landing.

We held a mock auction of one tall, standing white pine to see what attendees thought the large pine tree might be worth as "stumpage" while the tree is still standing in the woods. Managing Forester, Wendy Weisiger used a Biltmore Stick to measure the number of merchantable 16' logs and based on the diameter and number of logs to get an estimate the timber volume in board feet. A quick calculation using a generic stumpage price for average grade pine yielded a stumpage value roughly half that offered by the boldest bidders during the mock auction. Truth is: most people can't guess how much a given tree might be worth.  And nobody knows about internal red rot or defects until after a tree has been cut. 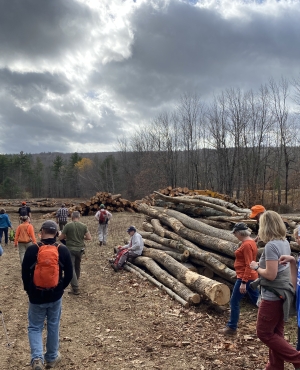 Logs piled on the timber landing
The return leg of the loop walk returned to the temporary log landing in the dry, open field where logs are being stored in "hitches" pulled by either the cable skidder or the grapple skidder for later processing. Amassing logs on a large landing area during ideal dry weather in advance of inevitable rain and snow allows more time logging now with time later to process and merchandise the cut logs into varous product sorts.

The "product sorts" on the landing are merchandised by the logger according to different tree species, log quality and log grades designed to maximize the most valuable part of each individual stem. The highest value products are various grades of oak, pine and hemlock sawlogs followed by lower quality "mat logs," fuelwood/cordwood and lastly pulpwood.  Some lower quality bole-wood will be chipped to create fuel-grade wood chips for a local wood-fired boiler district heating facility serving a private school campus.

Most of the brush and "slash" from unmerchantable tree limbs, branches was lopped low and left in the woods as habitat and to create a soft cushion for the machines and to prevent soil disturbance. The logger is purposely not placing debris in the main skid trail so it can once again be returned to a hiking trail after the timber harvest, just as it was after the last timber harvest here. Bronnenberg will use his excavator to smooth skidder impacts while clearing stream crossings and adding waterbars to close-out the harvest area to protect soil and water.

There are excellent opportunities for learning about forestry during a visit to an active timber harvest with foresters and the logger contractor. Timber harvest tours are a traditional outreach effort to showcase hallmarks of a careful, sustainable timber harvest operation conducted by The Forest Society.

The portion of conservation land being cut during the current harvest will regenerate new, young, vigorous stands of seedling and saplings for future high-quality forest products and enhance young forest wildlife habitat opportunities while protecting soil, water and wetlands. 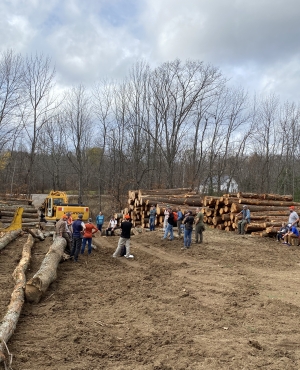 "Keeping forests as forests" allows for the long-term stewardship and careful forest management on portions of some of the scenic and productive conservation properties owned by the Forest Society across New Hampshire.