Planting for the Future 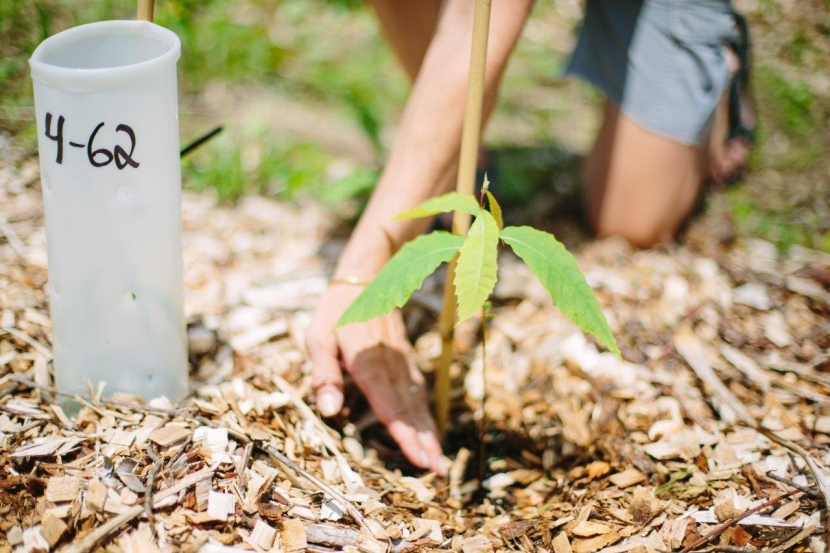 It’s not easy to find someone who remembers standing under the shade of a mature American chestnut tree anymore. My 95-year-old grandmother is even a few years too young for that privilege. The fungus causing chestnut blight (Cryphonectria parasitica) was discovered affecting trees in New York City, in 1904, and by 1930 most of the chestnuts along the eastern seaboard were dead. Because the fungus does not attack the trees’ root systems, chestnut saplings continue to sprout adventitiously in southern New Hampshire forests, pushing up over and over again from ancient root stock only to succumb to blight before they are old enough to flower and to produce seed. I still love to find these young trees, even knowing they are doomed. It is a sad reality for a tree that once numbered in the billions and was prized for its beauty, nutritious nuts, and straight-grained, rot-resistant wood. 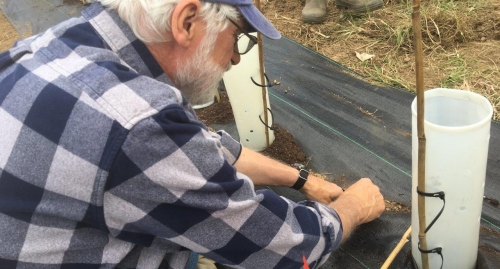 Today, a group of Forest Society volunteers is working to change the fate of the American chestnut in New Hampshire. In partnership with the Vermont–New Hampshire Chapter of The American Chestnut Foundation (TACF), the Forest Society recently established a chestnut seed orchard at the Tom Rush Forest in Deering, N.H. On a sunny day in May, volunteers braved clouds of blackflies to pick stones, roots, and clods of grass from an old field that was newly plowed and harrowed. “Preparing the site took longer than expected, but the volunteers pulled together and we got it done,” said Forest Society Forester Gabe Roxby, who is coordinating the project. Once the planting beds were level and smooth, volunteers laid down weed-control fabric and amended the soil before setting off to plant 600 chestnuts. “This is everyone’s favorite part,” said TACF New England Regional Science Coordinator Kendra Collins as she plucked a few chestnuts, already sprouting small white roots, from a bag of damp peat moss. Collins demonstrated to the group how to gently bury each nut and surround it with a tree shelter to keep mice, voles, and deer from making a meal of the tender seedlings.

The chestnuts are from four different trees in four distinct breeding lines, and were produced by TACF through several generations of backcrossing between Chinese and American chestnuts. The resulting trees should look and function like American chestnuts, but are actually onesixteenth Chinese chestnut (on average), which will hopefully confer some degree of resistance to chestnut blight. “To find out whether they are resistant,” said Collins, “we have to grow them. There is no shortcut to that step.” Eventually the Tom Rush orchard will contain as many as 3,000 trees, each individually numbered and tagged, from twenty different breeding lines. When trees are approximately five years old, they’ll be “challenged”: directly inoculated with blight fungus, and TACF science staff will rate each tree’s level of disease resistance, in order to determine which have acceptable levels. Trees that succumb to the fungus, or are deemed to have low levels of blight-resistance, will be removed from the orchard until only the strongest remain; a sylvan version of the Hunger Games. TACF’s ultimate goal for this orchard seems modest, if not a bit depressing: “We’re hoping that twenty trees out of the three thousand will show significant resistance,” explains Collins. “The rest will die or be removed from the breeding population.” The upside is those 20 trees will get TACF one step closer to developing a truly blight-resistant population that can eventually be re-established in New Hampshire’s forests. 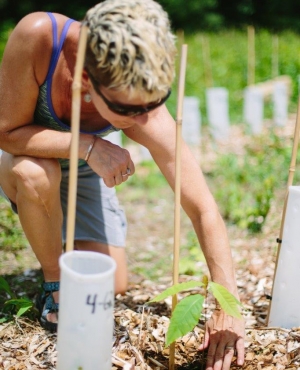 At the end of the planting day, the volunteers were exhausted but still smiling. “I’m totally whupped,” said volunteer Len Martin, “but I really enjoy being a part of something like this and I can’t wait to see those little guys popping up out of the ground and growing.” A sense of ownership and protectiveness for these chestnuts has already developed among the volunteers, which is a good thing since the seedlings will need considerable maintenance in the coming months: weeding, watering, and protection from predators. “Will you send around an email with photos when the seedlings emerge?” asked volunteer Walter Neuman. We promised him that we’d send out “new baby announcements” as soon as we could. The volunteers totally understand that re-establishment of the American chestnut in our forests isn’t likely to happen in their lifetimes, but if they have some small role in making it possible for their grandchildren or great-grandchildren to have the privilege of standing under a mature American chestnut tree someday, that is enough for them.

Click here to make a gift to support the American chestnut orchard at Tom Rush Forest. Contact Anne Truslow, vice president for development at atruslow@forestsociety.org if you have questions.

Chestnut seedlings as of early September, after a summer of growth. Photo by Carrie Deegan.

Updates on the project: