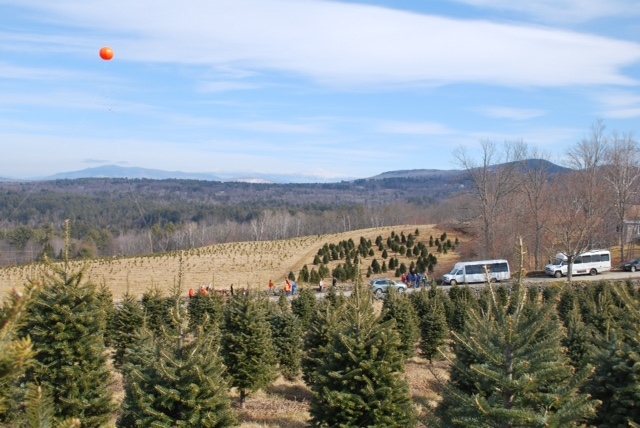 People opposed to Northern Pass overhead towers flew a balloon at the Rocks Estate in Bethlehem, NH, during a site visit by the New Hampshire Site Evaluation Committee, the body charged with considering a permit for the proposed 192-mile transmission line.

The New Hampshire Site Evaluation Committee (SEC) tasked with processing the 27,000-page application submitted by Northern Pass held five public hearings in the first half of March. Held in Colebrook, Plymouth (technically Holderness), Meredith, Concord, and Deerfield, the hearings offered the first opportunity for the public to voice their opinions about the controversial project directly to the seven people who, presumably, will ultimately decide whether or not to grant a permit for the 192-mile transmission line proposal, and if so, under what conditions. SEC, meet the Northern Pass opposition.

For some of the SEC members, this appeared to be an introduction to the controversy surrounding Northern Pass. Some of the people who spoke against Northern Pass first did so way back in March 2011, when the first set of Dept. of Energy hearings were held. Remarkably, the determination of those opposed to overhead towers and transmission lines has not wavered--if Northern Pass had ever hoped the opposition would tire and disappear, it was clear from these latest hearings that it has not. 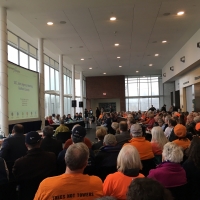 SEC hearing at PSU Ice Arena in Holderness March 14, 2016
That may be due to the success the opposition has had so far. The project was initially projected to be nearly complete by now, and instead faces a very uncertain future despite changing to new cable technology and agreeing to bury 52 miles through the White Mountain National Forest. There are an unprecedented  number of intervenors in a permitting process that isn't set up to deal with them. After more than five years, and despite spending enormous amounts of money on paid advertising, Northern Pass is a troubled, controversial project that needs to accelerate in order to catch the competition in a race to serve a perceived market in southern New England, but can't. And outside the permitting process, Northern Pass is facing a lawsuit over property rights funded by thousands of individuals.

All five hearings were well attended--the ersatz meeting hall inside the Plymouth State hockey arena in Holderness was overflowing, with some attendees relegated to watch remotely from a separate room. In Deerfield, SEC Chair Martin Honigberg had to limit questions in the Q&A session because there were so many. Multiple hearings lasted well over five hours.
And to be fair, there were comments in support of Northern Pass as well as in opposition. But many of those in favor would seem to have direct ties to the project, as employees of Eversource, job-seeking IBEW workers, or those who stand to benefit directly from Eversource largesse. As one commenter noted, "They [Eversource] leave a lot of residual money around." You can read a selection of comments, for and against, here. Among the many eloquent words offered in defense of New Hampshire's landscape were those of Ted Fitts, a landownwer in Whitefield:

"The issue here is NOT about individual jobs, nor about individual rights to use land or corporate rights to provide services, nor about individual preferences," he said to the SEC. "The one issue in front of you is your responsibility to our COMMON birthright:  an environment preserved from selfish and greedy assault and scarred by corporate muscle.  The lands around our communities, the vistas we see, are not the provenance of the powerful and the wealthy and the greedy.  The scar that enormous towers represent stands as emblematic of a willingness to give privilege to profit over preservation..."

Click here to read the Forest Society's comments presented to the SEC at each of the hearings. 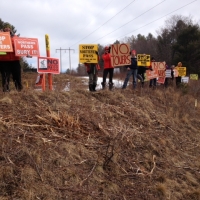 Northern Pass protesters greet the NH SEC in Stark, N.H.
The SEC also visited a number of sites along the proposed Northern Pass route as part of their travels to and from the public hearings. Often, those opposed to Northern Pass greeted the SEC along the way. But, as Allie Morris chronicled in the Concord Monitor, there were questions raised about whether or not Northern Pass was unduly influencing those site visits, and whether the SEC members were seeing everything they should. During the site visit tour in northern Coos County, we were told that these were only the first of what would be multiple site visits during different seasons of the year.

Shortly after the last hearing, the SEC issued an order outlining which parties who petitioned to intervene would be granted intervenor status. That order also grouped intervenors together broadly, which prompted many to question the process, as Sam Evans-Brown reports here. Objections to the decisions made by the chair on intervenors will be addressed at a hearing on April 12, when the SEC will also take up Northern Pass motions to be have certain application requirements waived and keep an economics study confidential.

What many are waiting for is an SEC decision on a schedule for the balance of the process. Northern Pass clearly wants to move the SEC process along it's intended timeline to reach a decision by December 2016. Counsel for the Public Peter Roth noted that no project before the SEC has ever met a one-year timeline, and suggested an 18-month schedule. The Forest Society has offered that a two-year schedule is more realistic. We will learn what the SEC thinks in a matter of weeks, perhaps at the above-mentioned session on April 12.

At some point, the SEC will also determine when to schedule two additional public hearings it agreed should be held to gather input on additional information required as part of the Northern Pass application under new SEC rules adopted last December. Stay tuned.