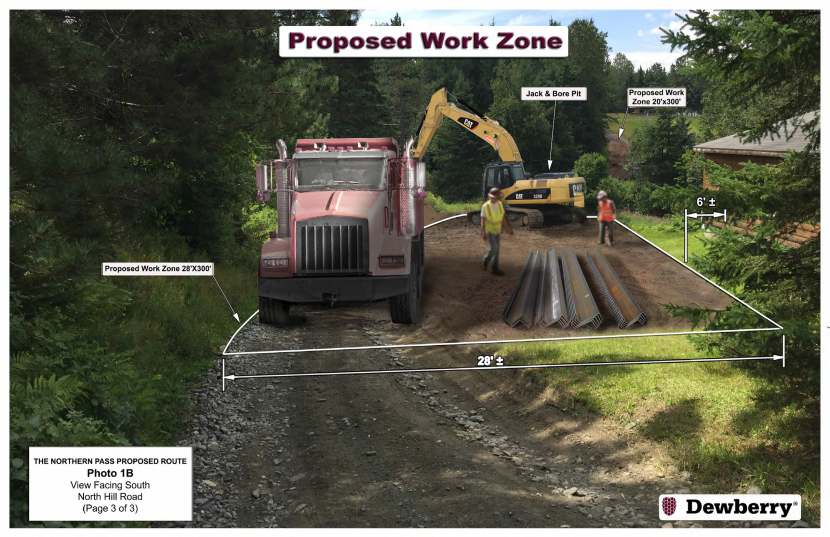 A simulation of proposed construction in Stewartstown, provided by the office of the N.H. Counsel for the Public.

The Northern Pass adjudicatory hearing, or trial, continued the week of May 1 with the cross-examination of Northern Pass's Construction Panel. That panel included Nathan Scott, Lynn Harrington, Sam Johnson, Kenneth Bowes, Derrick Bradstreet and John Kayser. There were four days of cross-examination scheduled, with an intention to finish with the Construction Panel and move on to the Environmental Panel, but by the end of the day Thursday (May 4), the construction witnesses were still in their seats and there were still questions to be asked. Those witnesses will need to return on May 31, when the SEC subcommitte hearing on Northern Pass next reconvenes. The amount of time the process is requiring is a consequence of the enormity of the project and its impacts, the amount of information in the application, and the unprecedented number of intervenors. 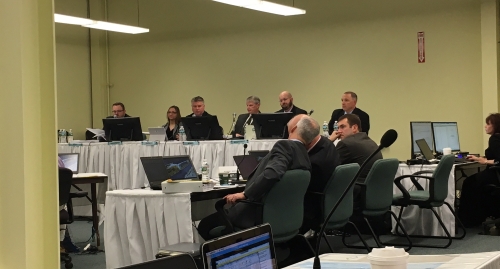 Among the takeaways was the reality that there is still much detail about the proposed construction of the 192 miles of transmission lines that is as yet not determined. It would appear that Eversource, mindful of the race to market among competitors like the New England Clean Power Link (in Vermont) and National Grid (in Vermont and New Hampshire) as well as homegrown renewable electric generation projects, has pushed its Northern Pass project forward before many issues have been resolved.

Tom Pappas, the attorney working for the NH Counsel for the Public, asked the panel about a number of construction details that highlighted the challenges of constructing along the currently proposed route, including horizontal drilling underneath the Connecticut River, burying lines below undersized dirt roads, and disrupting businesses and other users through downtown Plymouth. Testimony revealed the need for numerous closures of lanes and roads for three to five weeks, in some cases requiring long detours. The point being that the construction itself constitutes an adverse impact, which may or may not be justified by purported benefits.

"This is a rather narrow road, wouldn't you agree?" Pappas asked Northern Pass witness Nathan Scott. "One moment," Scott replied, as he did often during the four days in order to review the construction plans he had in front of him. "I read it as 10 feet wide."

Traffic management expert Lynn Farrington was questioned on her contention that there would be "no adverse impacts" from traffic as a result of the construction of the project, but ultimately acknowledged, after objections by Northern Pass attorney Barry Needleman, that she had not done any analysis of the impacts on tourism and local businesses.

"You haven't written that Traffic Management Plan, have you?" asked Pappas. Farrington: "No, I have not."

Pappas: "And, so, sitting here today, you don't have a basis to render an opinion as to whether or not the impact, the construction's impact on traffic will have -- whether it will or will not have an adverse impact on the tourist industry, do you? Don't you need to do the analysis before you can make the opinion?" Farrington (ultimately): " I did not specifically discuss tourism in my prefiled testimony."

Pappas: "So you haven't done the analysis to make that determination, have you?" Farrington:"No. I believe the purpose of my prefiled testimony was to outline the procedure to do the analysis based on the New Hampshire DOT requirements."

Pappas:"And so you don't have an opinion as to whether or not the Project's impact on traffic will have an unreasonable adverse impact on the orderly development of the region, do you?" Farrington (after Needleman's objection to the question was overruled): "I'm sorry. I'm not sure that I will ever have an opinion on that. I might be missing something there. I don't understand the question."

Pappas: "Let me ask you, Ms. Farrington, you didn't analyze whether or not the impacts to traffic will adversely affect businesses along the route, did you? Farrington:"No." 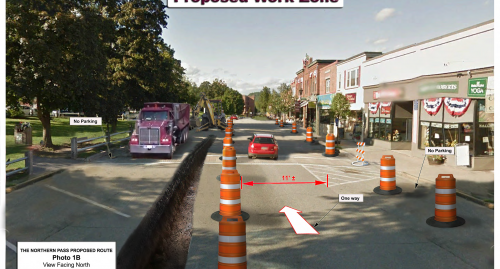 A simulation of proposed construction in downtown Plymouth, provided by the office of the Counsel for the Public.

City of Concord Deputy City Solicitor Danielle Pacik cross examined the Northern Pass panel on a number of issues directly related to the eight linear miles of impacts the project’s proposed construction would have on Concord homeowners and businesses. Her questioning revealed that there had been little to no direct outreach by Northern Pass to any Concord homeowners or businesses impacted by the project, or to city planners and engineers.  Her questioning revealed a number of new homes that had been built recently near the existing utility right-of-way which Northern Pass  proposes to use for its new towers that had been entirely omitted on Northern Pass project maps.  She also revealed that Northern Pass is contemplating using towers in excess of 160 feet in height to cross interstate 393 in Concord, which would make these two sets of new towers the tallest for the entire 192-mile project.

Pacik was also the first to raise concerns with land transactions that appeared to be structured to hide Northern Pass as the purchaser of the land and also to provide substantial financial benefits to individuals connected with the prime contractor for the project,  Quanta Services of Houston, Texas.

Grafton County Attorney Lara Saffo followed up with more questions about the acquisition of five properties by Northern Pass-related interests. The construction panel maintained they did not know the details of those transactions, and it's not clear why the subterfuge was necessary or who may have benefited financially as a result.

Jason Reimers, the attorney representing the Forest Society, highlighted the height of the towers along the new, overhead right-of-way that would need to be built and contrasted the height of the existing towers with the proposed Northern Pass  towers--including those that would be erected through conservation areas like Bear Brook State Park.

Among the most contentious issues for towns is who gets to say whether and how a private project like Northern Pass could use and impact municipal roads. The N.H. Dept. of Transportation has made it clear that it has jurisdication over state roads only. Northern Pass claims the SEC could authorize use of local roads. Attorneys representing the towns disagree.

Christine Fillmore asked the construction panel to point to the statute/regulation which gives the SEC the jurisdiction to permit use of municipal roads. Northern Pass attorney Needleman quickly objected and said that question required a legal opinion. Fillmore withdrew her question and so the panel did not answer. Suffice it to say that it is an unresolved issue that may well lead to court and to additional delays.

Update on SB 128 and the dismissed PPA

On Tuesday, May 9, the House Science, Technology and Energy Committee chose not to allow Senate Bill 128 to go forward, voting instead to retain the bill. This means it may get reconsidered in some form in 2018, but it is off the table for now. That is a blow to Northern Pass, which had hoped to use the PPA as evidence of public benefit in its application before the SEC. And given that Hydro-Quebec is looking for guaranteed contracts, losing on SB 128 won't have warmed relations between Eversource and Hydro-Quebec.

When Senate Bill 128 was brought forward earlier this year, Eversource denied that it was intended to enable a proposed Purchase Power Agreement (PPA) between Hydro-Quebec and Eversource NH. According to the Concord Monitor, [SB 128 sponsor Sen. Jeb] Bradley said the bill doesn’t give approval or preference to any specific project. But some critics warned it could open the door to customers financing the controversial Northern Pass transmission line, a point Eversource strongly refuted afterward.

No one from the utility testified at the hearing, but spokesman Martin Murray said in a statement that Eversource takes no position on the bill.

“SB 128, if passed, would not signal approval for any specific project or utility but would provide regulators with flexibility when considering proposals, from any utility, that are aimed at reducing costs to customers,” he said.

However, by the time the SEC trial got under way in April, the Public Utilities Commission (PUC) had dismissed the proposed PPA as being inconsistent with the law and under cross-examination, more than one witness representing Eversource, including Bill Quinlan, said that the company was looking specifically to SB 128 to clear the way for a PPA.