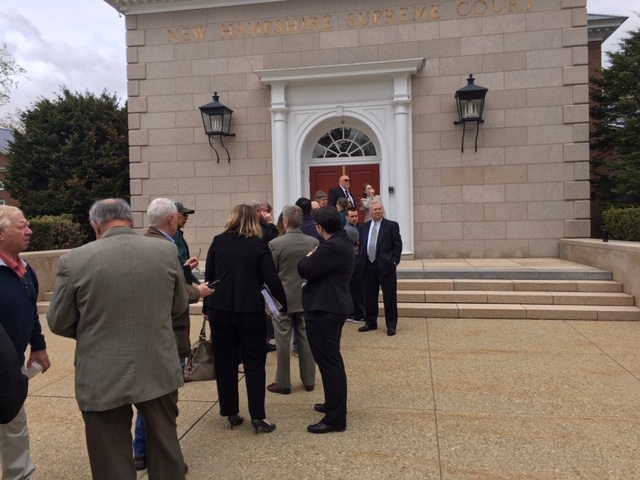 Interested parties lined up outside the NH Supreme Court in Concord to get a seat to hear oral arguments in Eversource's appeal of the Site Evaluation Commitee's decision to deny a permit for the proposed 192-mile transmission line known as Northern Pass earlier this year. Jack Savage photo.

The New Hampshire Supreme Court unanimously denied the appeal by Eversource of the state Site Evaluation Committee (SEC) decision to deny a permit for the proposed Northern Pass transmission line. After nearly nine years, the battle over the controversial 192-mile project is effectively over.

The Court strongly affirmed the SEC’s decision, finding that the SEC fully complied with the law and with SEC rules to administer the law. It would not appear that there is any realistic path forward for Northern Pass at this juncture.

“We applaud the decision by the Supreme Court. We took on Northern Pass because we saw the proposed overhead line as a direct threat to conserved lands in the state, including three of our Forest Reservations and dozens of conservation easements,” said Jane Difley, president/forester of the Forest Society. “We felt privileged to stand with the thousands of individuals, dozens of communities and partner organizations who expressed appreciation for what we believe makes New Hampshire special.  We want to thank all of those who invested a significant portion of their lives over the past nine years in hopes of this outcome."

“This legal victory is a win for everyone in New Hampshire and beyond that treasures New Hampshire’s superior landscape and outdoor recreation,” said Amy Manzelli, BCM Environmental & Land Law, who represented the Forest Society at the SEC and the Supreme Court.

"We have reviewed the record and conclude that the Subcommittee’s findings are supported by competent evidence and are not erroneous as a matter of law. Accordingly, we hold that the petitioners have not sustained their burden on appeal to show that the Subcommittee’s order was unreasonable or unlawful," concluded the Supreme Court. The decision was written by Associate Justice Anna Barbara Hantz Marconi, with the other four justices concurring.

Eversource does have the option of filing a motion for reconsideration of the Supreme Court decision within 10 days. A similar motion for reconsideration was also filed last year at the SEC after its unanimous decison to deny a requested Certificate of Site and Authority, and was denied by the SEC, prompting Eversource to appeal to the Supreme Court.

In its written decision to affirm the SEC ruling and deny the appeal, the Supreme Court rejected Eversource's arguments one by one, reaching the following conclusion:

“The legislature has delegated broad authority to the Committee to consider the ‘potential significant impacts and benefits of a project,’ and to make findings on various objectives before ultimately determining whether to grant an application.” Appeal of Allen, 170 N.H. at 762 (quoting RSA 162-H:16, IV). In this case, the Subcommittee considered and weighed extensive evidence including testimony from 154 witnesses and over 2,000 exhibits presented by the parties, including 160 intervenors, conducted seven site visits, and held 70 days of adjudicative hearings. Our review is limited to determining whether the Subcommittee’s findings are supported by competent evidence in the record and are not 31 erroneous as a matter of law. In doing so, we defer to the Subcommittee’s resolution of conflicts in the testimony and its determination of the credibility of witnesses and the weight to be given evidence. We reiterate that it is not our task to reweigh the evidence or to determine whether we would have credited one expert over another. We have reviewed the record and conclude that the Subcommittee’s findings are supported by competent evidence and are not erroneous as a matter of law. Accordingly, we hold that the petitioners have not sustained their burden on appeal to show that the Subcommittee’s order was unreasonable or unlawful.

The Union Leader coverage of the story can be read here.

The full text of the decision can be read here.