Honoring Our Conservationists of the Year 2015 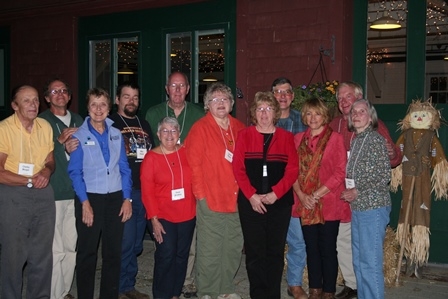 The Forest Society's 114th Annual Meeting was held Sept. 26 at The Rocks Estate in Bethlehem. After a beautiful fall day of field trips and a catered dinner, President/Forester Jane Difley recognized this year's Conservationists of the Year:

A few years ago, a large utility began buying up thousands of acres of the North Country in order to build a massive transmission line through our state despite widespread opposition. Northern Pass representatives went door to door in Pittsburg, Clarksville and Stewartstown offering increasingly staggering sums to landowners, often pitting neighbor against neighbor, friend against friend, brother against sister. Despite spending $40 million over the course of a year, they have still not successfully acquired a complete route for their towers and lines through that area.

And the biggest reason that they have not is because of the actions of a few key landowners who owned land along the potential routes Northern Pass was hoping to acquire. Routes across one of the most stunningly beautiful areas in New Hampshire. A few key landowners, supported by a community standing in opposition to the unnecessary industrialization of a landscape they cherish, recognized that they were in unique positions to say no to the money that Northern Pass was offering in an effort to save a larger landscape we all cherish. Or as one of them (Rod McAllaster) so famously put it, “Our roots are deeper than their pockets.”

The landowners we are recognizing today then went one step farther. Each of them chose to put permanent conservation easements on their land that will forever protect it from towers and power lines—overhead or underground. Today they are our heroes, and their words and deeds continue to inspire an entire state to demand that we not sacrifice our scenery. Please join me in congratulating our Conservationists of the Year, the landowners who stood tall against Northern Pass: