Forest Society Honors Ben Gayman as Conservationist of the Year 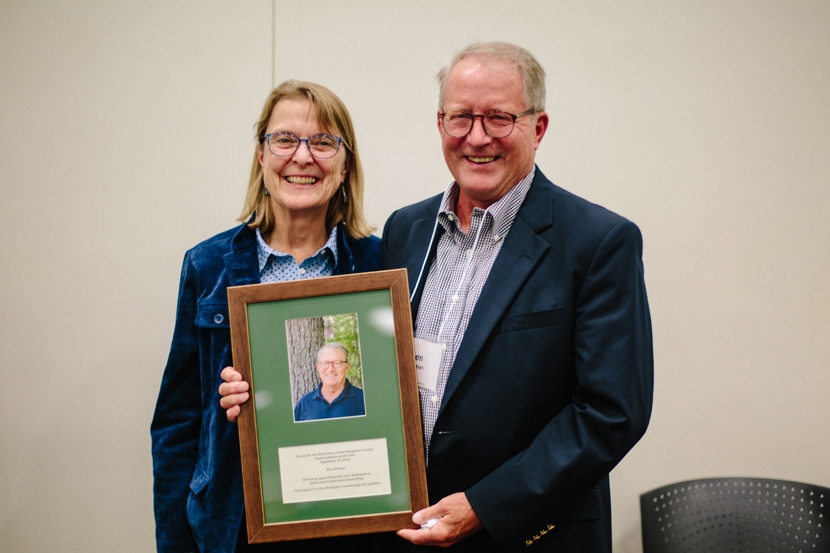 On September 29, 2018, the Society for the Protection of New Hampshire Forests presented the organization’s Conservationist of the Year award at its 117th Annual Meeting. Among the organization’s most prestigious recognitions, this annual award honors those exemplary people whose have worked to promote land conservation through many different avenues, often with significant sacrifice. The Conservationist of the Year honors people whose work to promote and achieve conservation is exemplary, people whose actions have made a difference not just in their own backyards, but also have advanced the protection and stewardship of land statewide.

“While Ben’s résumé is quite extensive, it is his list of accomplishments that have helped shape New Hampshire’s landscape that we are honoring today,” states Jane Difley, president/forester of the Society for the Protection of New Hampshire Forests. “Ben was an invaluable advisor and solicitor for land campaigns that conserved more than 46,000 acres in Forest Society reservations. He was instrumental in extraordinary land conservation projects, including the 171,500-acre Connecticut Headwaters Project and the conservation of 5,800 acres of land surrounding the Balsams. All total, Ben was instrumental in more than 400,000 acres of New Hampshire’s protected lands. Ben’s conservation legacy has had tremendous impact on New Hampshire’s special landscape and for that we recognize him today.”

Past Conservationists of the Year include Gov. John and Anna King, U.S Sen. Judd Gregg, descendants of John Wingate Weeks and naturalist John Hay. It is the Forest Society’s highest recognition.