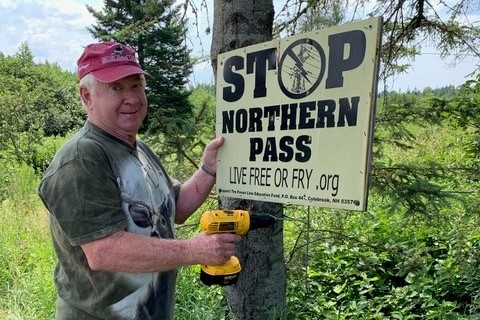 Brad Thompson of Stewartstown removes STOP NORTHERN PASS sign from his Bear Rock Road property after learning the news that Eversource had pulled the plug on the power line project.

On July 25, less than a week after the New Hampshire Supreme Court issued a unanimous decision affirming the also unanimous decision of the NH Site Evaluation Committee (SEC) to deny a siting permit for Eversource’s Northern Pass project, Eversource informed the federal Securities and Exchange Commission (the other SEC) that the Northern Pass project has “been brought to an end.” As InDepthNH reports, even the project developer now says “it’s over.”

The Supreme Court’s 31 page decision issued July 19 not only upheld the original NH SEC decision, but also strongly rejected the core legal arguments Eversource made in its appeal seeking to set aside the NH SEC decision. Governor Chris Sununu, a vocal proponent of the Northern Pass project, said shortly after the Court decision, “The Court has made it clear, it’s time to move on.” We agree, though part of moving on should include an appropriate celebration of the nine year effort by thousands of citizens to protect the landscapes that make New Hampshire one of the Earth’s special places.